Random Thoughts of a Cross-Disciplinarian 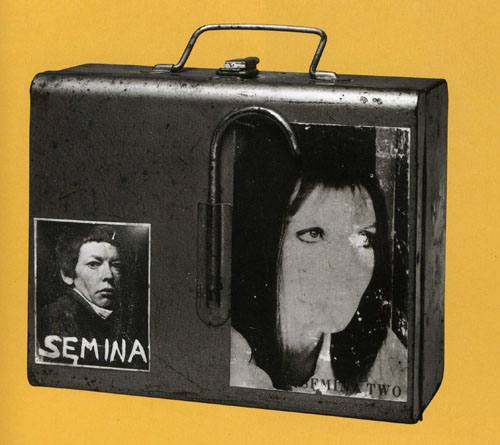 I have a sense of being “citizen-victim” of politiculture, recently enduring the politibabble of the Governor’s “State of the State” address and the President’s “State of the Union” address – both evocative of Orwell’s “double speak,” the Cold War, the McCarthy witch-hunt for “Unamericans,” the Watergate break-in and break-down, and Clinton’s struggle to define words like “is” and “sex”. But perhaps life is even more complicated today by . Postmodern lacunae, shifters and technologies? I can’t help but think some artists who feel disaffected might turn toward (neo-)dada/(neo-)surrealist methods to explore ‘the absurd’ for its expressive potential, if not for consolation.

And then, Shawn Rossiter reminded me of Semina Culture: Wallace Berman & His Circle, on view through March 15th at the Nora Eccles Harrison Museum of Art (Utah State University, Logan). This is a refreshing exhibition for its reintroduction of pivotal figures in American cultural production as counter-production. The Beat Generation of the 1950s, predominantly West Coast rebels in poetry and visual art, were precursors to the 1960s Hippies. Of the Beats, Wallace Berman held particular distinction (despite less publicity than poet Ginsberg or novelist Kerouac) because of his freely distributed, free-form, privately published journal titled Semina.  Each issue, printed in small number, was consumed and passed around from friend to friend. Like zines of today, Semina appealed to a specific circle, a loosely defined aesthetic. It is hard to imagine that just nine issues of Semina, published between 1955 and 1964, should be considered influential – but each issue included contributions from artists in the-then “anti-establishment” who are now considered “establishment.”

Fresh from celebrating my one-year anniversary working in Salt Lake City, the contrasts between Beatniks and Utah artists are striking. My linear (il)logic spun out of control. The discourse about “establishment versus anti-establishment” has been a turbulent undercurrent in my exploring SLC’s art (demi)monde. An anti-anything requires a pro-something. Naturally, the process of categorization is facile, but useless unless the categories are defined and agreed upon. In 1663, Charles Le Brun was appointed Director of the French Academy by King Louis XIV, with authority to devise and impose standards of representation, subject matter, style. This imposition of standards implies that artists scattered throughout the land were doing much as they pleased; yet Le Brun’s duty was to impose compliance with the Academy’s standards. So is “establishment” a response to anarchy, renamed “anti-establishment” after “establishment” is, uhm, established?

Truthfully, these were, remain, and will forever be co-existent (and complementary) phenomena. There were tensions between Leonardo’s scientific naturalism and Michelangelo’s superhero musculature of the early 16th century, William Adolphe Bouguerreau’s Romanticism and Edouard Manet’s jarring realism of the mid-18th century, Auguste Rodin’s late 19th century realism and Marcel Duchamp’s early 20th century conceptualism, Thomas Hart Benton’s 1930s Regionalism and Jackson Pollock’s late-1940s abstract expressionism. Today, can one identify tension between, say, Kenny Scharf’s ‘Pop sensibility’ and Damien Hirst’s graphic materiality? Closer to home, Salt Lake and Utah are home to numerous art venues, each with a “look,” responsive to each other, none more “right.” (Though some may hold strong opinions about what constitutes “good” or “bad” art.)

A fine example of this evolution from anti- to anti-anti (as a double negative ought to be positive?) is Dada. The artists who, in 1915, founded Dada – first in Zurich, then in Berlin, Paris, New York – were of varied artistic disciplines, mostly visual artists and writers. They reacted to World War I with irony, cynicism, and anarchical nihilism. The human civilization experiment ran out of control. The illogical and the absurd, combined with the role of chance in artistic creation, were exaggerated.

Their “performances” at the Café Voltaire would have poetic recitations obscured by loud music, dancing obscured behind painted curtains, music played without musical instruments, and other farcical acts. This was a mirror of (self-)judgment, intended to inspire an analytical examination of one’s self, one’s actions, one’s production. But imagine their dismay when some – the longer-lived of the Dada collaborators – realized they had evolved from [1] artists revolted by and revolting against the disjunction between the artifice of civility and the underlying human instinct for irrationality (esp. the chaos of the First World War) to become [2] celebrated cultural icons who had, unwittingly, produced much sought after collectible commodities!

The current banner is the Postmodern (or Post-Pop?). I won’t bother trying to define it; as I wrote above: “the process of categorization is facile, but useless unless the categories are defined and agreed upon.” But I can point to three contributing factors that have shaped our Postmodern sensibility , whether we are conscious participants, subconscious victims, or flat-out unconscious. The three factors: lacunae, shifters and technologies. These are, in order, the gaps existing in our discourse, the words that have no fixed meaning that are (ab)used in our discourse, and the skills (and tools) with which we engage in discourse.

With that, I return to Semina Culture, a thought-provoking and timely exhibition at the NEH Museum of Art at Utah State University. Wallace Berman and his circle seized opportunity before the establishment invited them. They were honest and open, leaving little to the imagination – as you’ll see in the explicit commentary, nakedness (or nudity?), and sexual reference. No lacunae (gaps) in their discourse. Their words were definite and precise, igniting passion, gouging into raw flesh. No shifters in their discourse. Their technologies were critical eyes, drawing, writing/typing, photographs, and Berman’s small hand press. No fanciful technologies, as this predated the refinement of binary mathematics into the multiplicity of the Internet Age.

The Beat Generation did what they did, made what they made, with and without complaint. But they knew to whom and about what to complain, all the while cognizant of the value of rejection. At least s/he of the “anti-establishment” who is rejected has attracted the attention of and received (or obligated) response from the “establishment.” (Better bad press than no press?) Is it better to be shooed away like a fly buzzing around a reader’s head than squashed under the weight of the reader’s tome? A rite of passage? A necessary step of the anti-establishment toward becoming establishment? Perhaps the pains of evolutionary “becoming” are more symptomatic of real life than the comfortable ideal of static “being”?

If you’ve read this far, you’re likely wondering what’s the point of this stream of commentary in constant flux? This is an invitation for contact by like-minded individuals prepared for action in an open forum for [1] discussion (practical, theoretical, socio-political, etc.) and [2] artful activities (spoken word, performance, musical improvisation, automatist drawing, group collage, etc.) to engender a collaborative spirit in Salt Lake and Utah. Emailing jayh@slartcenter.org is the best technology.

Tagged as: by Jay Heuman