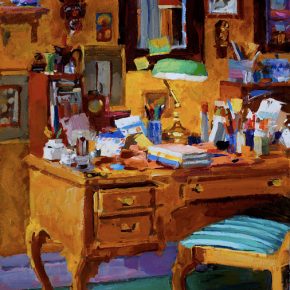 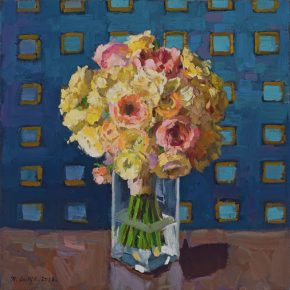 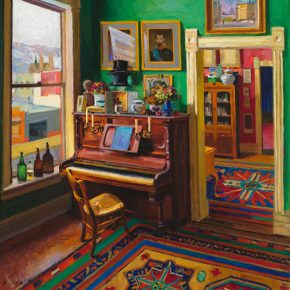 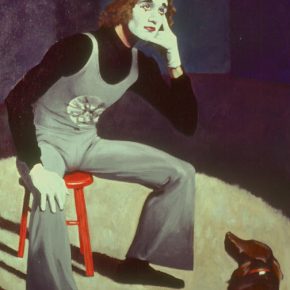 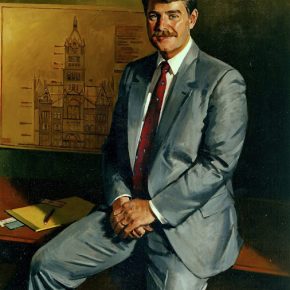 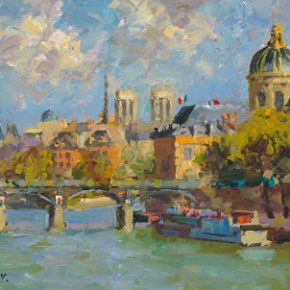 Each time I am lucky enough to chat with Randall Lake I come away more impressed. It’s not just his art, it’s his intellect, his curiosity, his willingness to challenge himself by trying new palettes, new brushstrokes, by reading biographies of artists he admires, and experimenting with their methods. Lake has a show opening at the Guthrie studio (on 200 South) on April 23rd. There you will see work from last October’s visit to Paris, as well as other recent works.

We talked about his 40-plus years of tenancy at the studio, and he commented on the contrast between then and now in his work space and in his work. He started at Guthrie with a 3-room space, all with north light, for $40 a month, which included utilities and parking.  His early ‘70s Paris studio on the Rue de Grenelle  was a stiflingly hot, tiny, former maid’s room, for which he paid more than the Guthrie.

When he got into the Guthrie his co-tenants were painters John Erickson, Sam Collette,Wayne Geary, Richard Murray, and sculptor Peter Kohl. “We had a lot of fun then—parties on the roof, barbecues, showed movies, had dances on the main floor.” They did portraits of one another, “… since we had plenty of available models.”

Lake’s shifts in style throughout the years have been deliberate. “If I had to paint the same things in the same style all my life, I would die!”  A few years ago he took a night train from Paris to Amsterdam specifically to see all the works at the Van Gogh Museum. He studied the brushstrokes and cross-hatching in paint, and started reading everything he could about Van Gogh, even researching historic events that occurred during his lifetime. He learned that Van Gogh greatly admired another French artist, Adolphe Monticelli, who happened to be represented by Van Gogh’s brother Theo. Of course that prompted Lake to look into Monticelli’s work. “I immediately recognized his influence in Van Gogh’s works.”  As with Van Gogh and Monticelli, Lake has a library of books and folders, each with information about and images of artists he’s interested in. His current favorite book about Van Gogh is filled with Post-its, marking points of particular interest to him.

Lake is using the heavy impasto techniques of those two artists, with wonderful results, which you will be seeing later this month. “It’s not as easy as I thought. Doing impasto is like walking a tightrope without a net. You can’t just go back and fix something you’re not satisfied with when you’ve got 10 pounds of paint on the canvas.” 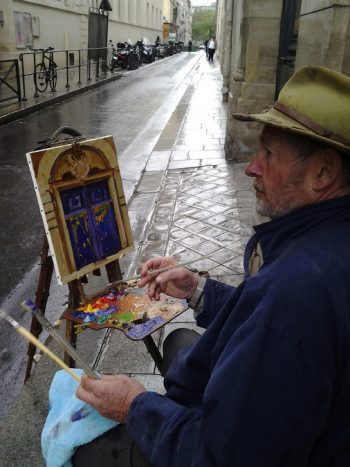 Lake’s successful career began with portraiture in Paris and in Salt Lake City.  Lake’s view on portrait-making is that it’s a tough genre. His first commission in Paris was of the two children of Pulitzer Prize-winning author Robert K. Massie, one of whom was a hemophiliac. Massie had written a book about Nicholas II and Alexandra of Hesse, who also had a child with hemophilia. In Salt Lake City, Lake painted Palmer DePaulis, whose portrait is in the Salt Lake County collection, and Val Browning, among many other prominent Utah figures. Many of his portraits come with interesting stories. Val Browning, a well-known art collector, was posed at his home, in front of a painting by a great master. Browning let Lake take the painting back to his studio to finish the portrait. “I was terrified – what if there was a fire!”  Now Lake says he would not do another portrait of anyone, except maybe of a certain Utah political figure he admires. “But I’d probably do it in a new style.”

As Lake puts it, “I only have so many bullets left …” so he intends to continue learning and experimenting as long as he can. There will be more ”thens and nows” for sure.