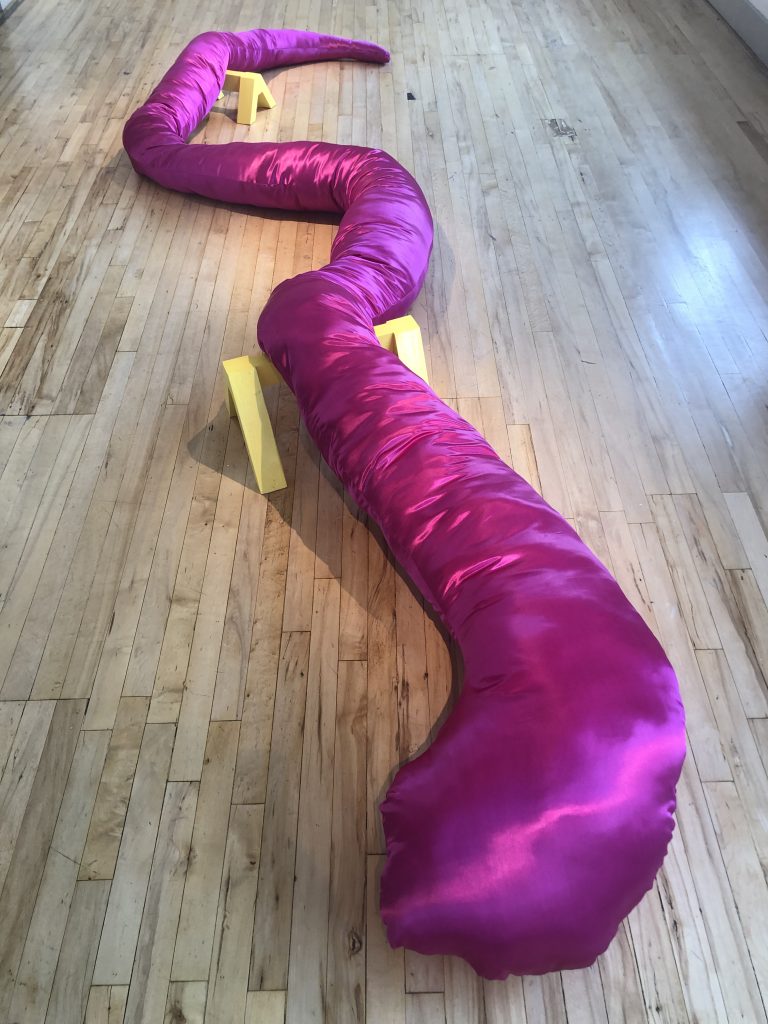 “Stretch” by Carrie Everett at the Bountiful Davis Art Center

Even though Rachel Henriksen and Carrie Everett sign their art works individually, they show them together, thereby demonstrating a common purpose. Their statement, signed by them both, reads rather like a research proposal: “to understand and process … the physical and emotional transformations associated with womanhood.” Considering how the concerns of men have dominated not just art, but human culture, for far too long, theirs is a very welcome project. Yet it remains art: “the manipulation of materials and space,” as they describe it. So while some very sophisticated content may be expected here, it may well be that it can only be grasped directly in the form in which they present it. Writing about it at this stage is presumptuous, and has to be limited to close observation of what is there to be seen. Art should always be experienced in person, but sometimes one observer can help others see it more clearly. 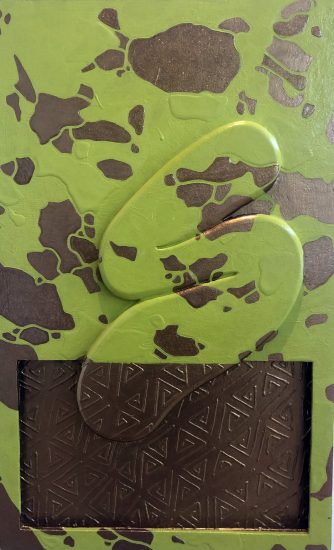 Rachel Henriksen, “Nothing Gold Can Stay”

Both artists employ soft, linear forms. In the entryway of the Bountiful Davis Art Center, a long fabric tube suggestive of a snake stretched out on the floor presages the appearance of more such shapes, though the connection doesn’t appear until later — when the small side gallery is entered — whereupon viewers will find out that one is titled “Stretch,” and is by Carrie Everett. Nearby, in “Nothing Gold Can Stay,” Rachel Henriksen displays a sinuous, flattened version of the form that turns back on itself sharply, producing what will likely be taken for a letter “S.” Overall, “Nothing Gold Can Stay” is organized on three levels, with the “S” shape the highest and a sunken rectangle, cut through the medium layer, comprising the lowest. Distinct from these elevated and excavated layers is a pattern of metallic gold paint on an acid green background. The pattern made by the gold paint is also visible as a raised pattern in the green background. This is the first appearance of a puzzle that will recur: if the gold pattern was painted over the green, how does the green then cover the gold in places? This isn’t just a technical question: it must be part of the work’s point. Then the excavated rectangle has a different raised pattern, a triangular fret work, that also covers the “S” form where it overlaps the cut out.

Everett’s primary motif here, seen in three tableaux she created in order to photograph them, is a triangular enclosure created by two sides of an architectural, tiled, inside corner, within which two or more enigmatic, but obviously hand-shaped, objects cavort. It’s worth noting that when the prints are shown straight from the inkjet printer, they have the flat, informative quality of photos. The third side of the enclosure is provided by the picture plane — the space occupied by the paper it’s printed on. But once framed and under glass, something surprising happens: the illusion that the viewer sees into an actual space in the wall is made compellingly real by the bright, hard glass and frame. 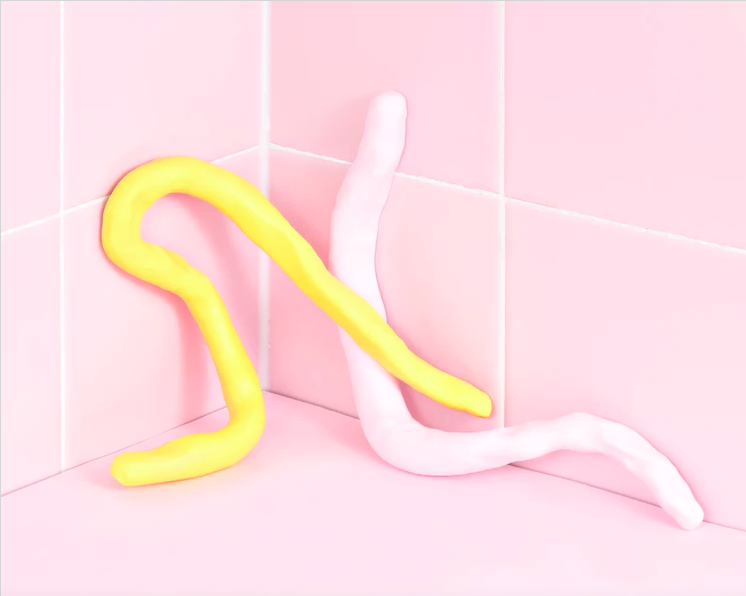 Carrie Everett’s “With I” 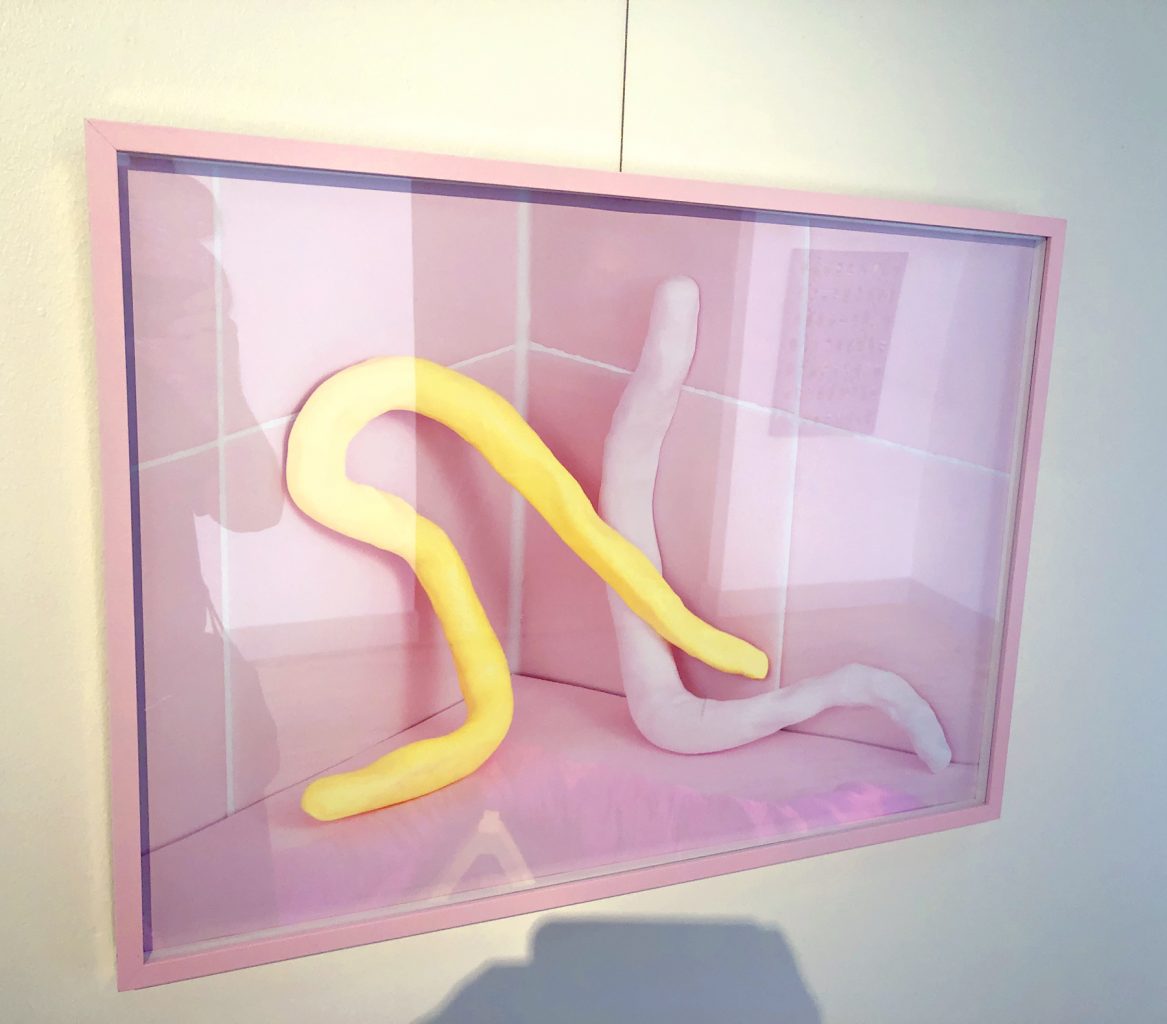 Carrie Everett’s “With I” installation view

Clues to Henriksen’s process begin to take shape when the pattern of “Nothing Gold Can Stay” appears in very different guise in the suggestively titled “Carving Out Space.” Here the support has been flattened, but the three dimensions are rendered not by actual layers, but through an illusion created by dividing an elaborate pattern into shapes that violate one another’s color schemes, and by using small amounts of a heavy-bodied paint. In addition to creating a sense of depth, her technique here generates an illusion of transparency. In the center, a large oval recalls another work, “Alone Together,” in which 63 similar ovals, arranged in ranks and files, show off their unique paint schemes. An implied climax to this presentation occurs in “As We Coalesce,” wherein two long, slender forms that have formed a tight series of curves by hugging together sprout a pair of complex patterns that ignore the two original forms, seeming to pirouette in accord with a plan of their own that unites the underlying pair. 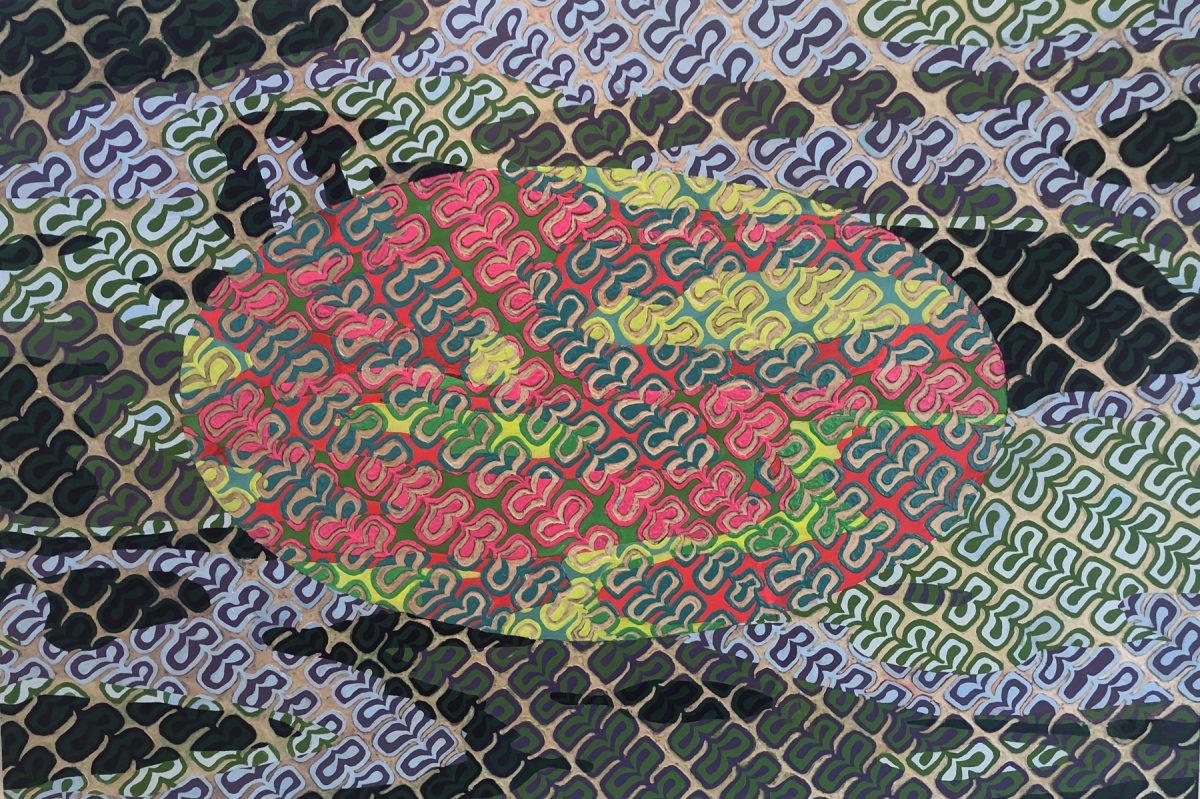 By now, it may seem that the differences, those between the two artists’ efforts but also within each of their bodies of work, carry more weight than the similarities. But within those different styles there are patterns that hint at fundamental agreement. Everett foregrounds individual elements — mostly, but not always snake-like “characters,” a term seemingly justified by the theatrical sets in which she deploys them. Within these enclosures they interact like symbolic living things. Henriksen, on the other hand, works with planes and fields of texture, larger areas that might correspond to populations and their behavior, or just as well to interior reality. The one thing that seems clear when standing in front of them, contemplating how they feel, is also the present topic of seismic change in more verbal studies of human relations. It’s not so much the difference between sexes, which after all is a predetermined genetic property. Rather, it’s about gender, which is increasingly making itself known as an acquired, largely learned, socially influenced, and generally very poorly understood characteristic. This work, for instance, flies in the face of the notion that parents can throw a party to “reveal the gender” of their unborn child. They can’t, because it’s hardly begun forming, and will continue doing so for a lifetime. Nor, by the way, will they have as much influence on their children’s gender as they think.

For me — and there are no objective absolutes in mind here — the work that comes closest to summing-up Everett and Henriksen’s art is also the most intriguing single work of art I’ve seen in some time: Henriksen’s “Thinking About Origins.” Here, in ostensibly one work. are two painted surfaces, laid one over the other, with the top one loosely attached — taped at the four corners, actually. Both are covered by a single act of painting, made of elaborately free-flowing organic designs done in yellow dimensional paint. In some places, alternating bands of the pattern are filled in with a pink that contrasts harmoniously with the blue-gray background. In other areas, the yellow pattern swirls on its own. But another design is superimposed on this in the form of organically-shaped holes cut through it that reveal the underlying surface. That surface differs in some places subtly from what covers it, but in other places it’s a variety of utterly different patterns. I can’t think of a more revealing summation of human experience than layers that are so like each other, yet so independent of each other. There may not be words yet to explain it, but in these artworks it can already be glimpsed. 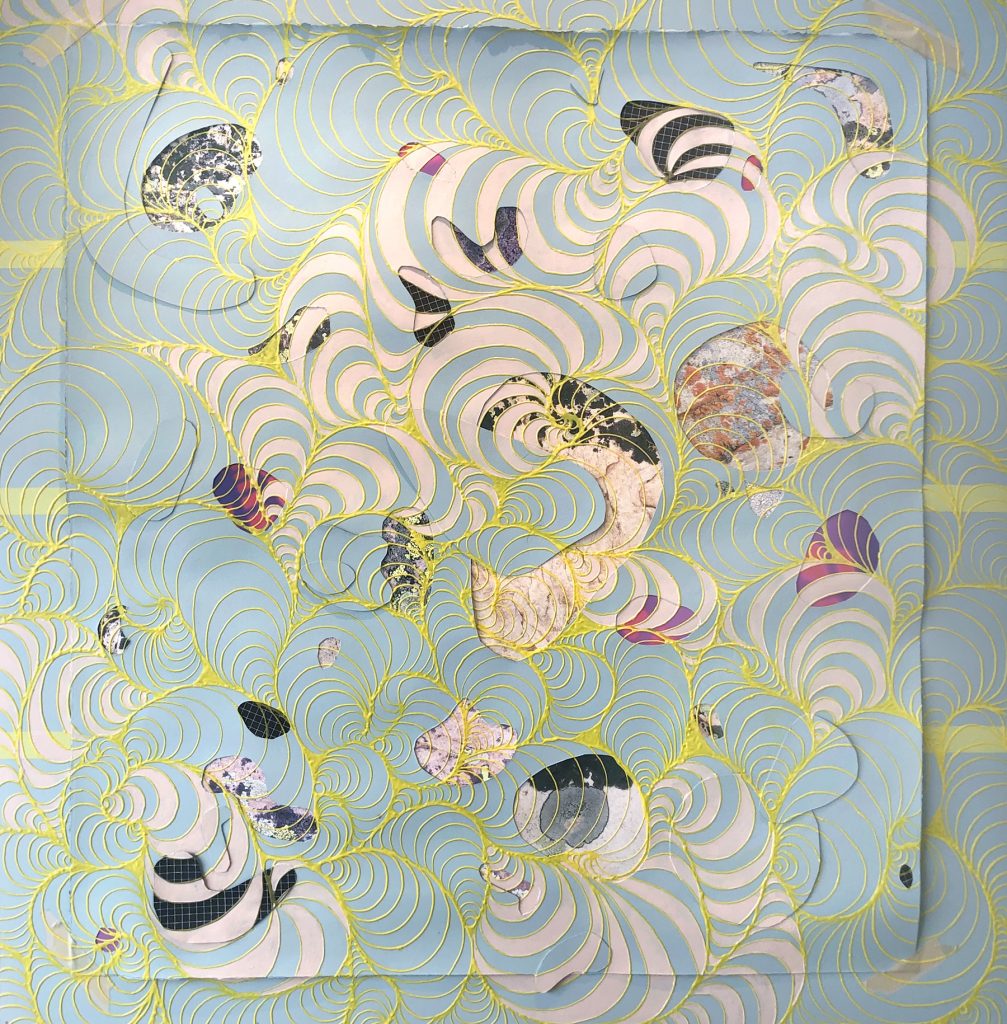