OK.
You may be convinced there is one authentic way of painting. One subject matter, perhaps, and one legitimate presentation. Like Clement Greenberg, you may think pure painting must be flat, call attention to itself as two-dimensional manipulation of color and form on a wall. You may associate large canvases with Abstract Expressionism, which demanded them as proof of commitment to the Church of Art. You may demand the expression of emotion through aggressive handling of material, like thick impasto or palpable painter’s marks. Or you may think that all art is properly and exclusively a cerebral expression of ultimate reality, much like the goodness of God. Paintings may resemble the retinal impression of three dimensions reproduced on a two-dimensional surface. Contrarily, the whole point may be the human capacity to imagine the unseen.

Cognitive science teaches one vital truth: that our memories are illusions, acts of a mental Photoshop program that assembles them anew each time, using stored, fragmentary bits and pieces. You may feel it is the responsibility of paint to make this process visible by projecting it outside the painter’s head, showing those fragments individually, like dreams seen without the dreamer’s effort to organize them into retrospective narratives. On the other hand, modern physics on the order of quantum mechanics proffers another vital truth: that nothing is solid, that qualities like temperature and pressure are anatomically-scaled illusions that can be explained by recourse to molecular behavior. Even the space in which particles spin out the illusion of solidity may be itself an illusion. Time, on the other hand, with all its indefinable characteristics for now seems safe, probably real, according to at least those few cosmologists who can keep up with evermore confounding evidence.

John Berger’s old assertion that the way forward for painting must lie in the return to, and advancement of, time-crunching Cubism may seem validated by your chosen painter’s efforts to depict time in a static image. Or you may know that our human perceptual apparatus evolved over time to enable us to interact safely with an indifferent world, one lying between the Scylla of the infinitesimally small and the Charybdis of the incomprehensibly vast, wherein we dwell and employ tools meant to keep us safe from tigers, but which are unsuited to comprehending the irreconcilable, mysterious vistas that beckon from beyond our petty concerns. 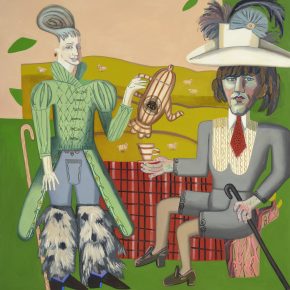 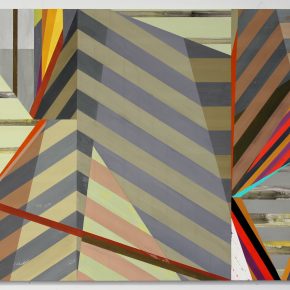 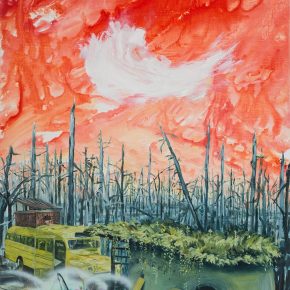 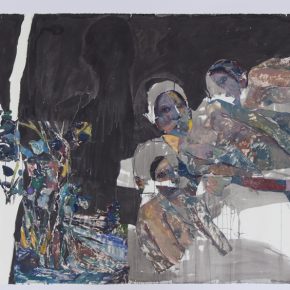 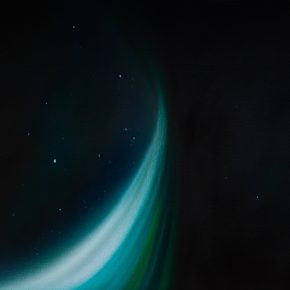 Anyone who thinks he knows such an ultimate truth may stop reading here. Whoever believes she knows the proper task of art can click the arrow below that is the digital equivalent of turning the page. For the rest, the good news is that one of the most eagerly anticipated exhibitions of the 2014-15 academic year just opened at Weber State’s Shaw Gallery, and that it lives up to its co-curators’ desire to demonstrate the vitality of painting at this politically frustrating and historically dubious moment. Twenty-two large and precocious works of art have been assembled by Matthew Choberka and Lydia Gravis, who bring together artists from all over the country, employing familiar and unfamiliar approaches to painting that promise they will go the distance. Although some appear purely ‘abstract,’ and others present recognizable ‘images,’ they are all ‘representational’ in the sense that each represents one artist’s venture into a meaningful life. Everyone wants to find a purpose in life, even those who, convinced it has none, settle for demonstrating its lack. But art is only a possible choice for those who wish to share their search or their conclusions. Pure Paint for Now People strives to be a glossary, if not an encyclopedia, of current ways of painting. To that end, no single metaphor can describe its contents.

One metaphor without which I find it increasingly difficult to talk about today’s art is strategy. Where for most of art history an artist went into the studio knowing what the job required—national myth, historical precedent, individual significance, mundane experience—today an artist’s first challenge is to conceive or discover a unique, personal approach to interest an audience. In trying, while contemplating a work, to identify its maker’s strategy, I am trying to project myself into the individual artist’s experience, to read minds one at a time.  Here two of them, Choberka and Gravis, describe in their introduction the conundrum as they know it—as the common property of their tribe:

The act of painting has, for several generations, been understood to, on one level, be concerned with understanding and defining itself: to be a form most relevant when all hopes for relevance are abandoned, when it makes no claim to address life as it is lived or to reflect larger concerns in the culture. Painting thus turns inward, seeking purity and autonomy.

But, as their exhibition title—Pure Paint for Now People—suggests, they actually reject the part of that statement that represents someone else’s conclusion. There’s nothing pure about painting as they see it. Rather, it’s contingent, and autonomy belongs to theory, something that accumulates beneath the east end of a cow watching the sunset while chewing its cud.

Take Hannah Barrett, for instance. “Summer Shepherds” violates most of the rules of realism, as distilled by centuries of painters in a process that climaxed in the 19th century. Its visual realm is flat, so that the pouring figure has to twist her hand across, rather than around, the teapot, while the parallel lines on the blanket decline to converge in the distance, where tiny sheep are presented stiffly sideways, the way Stone Age cave paintings or Egyptian tomb friezes show them. These choices are intended to call our attention to others, like the deliberately ambivalent clues given by costumes and coiffures. While the image harks back to a bucolic age, an Arcadian ideal symbolized by peaceful agriculture, the painter looks forward to the ongoing creation of a similarly idyllic time for gender conflicts: a time when identity will be free of preconceived notions of reproductive status determining fate. In case it’s not clear that she sees this as a sunny future, note the cloudless sky, its cast light unperturbed by shadows. So much for the notion of irrelevant painting, lost in solipsism and indifferent to cultural concerns. This is painting with passion: art that in many places could get you killed.

By no means are all the works controversial in just this way. That would be another show, perhaps one with ‘engaged’ in the title. A substantial portion of today’s strategies start with technique. Jennifer Meanly speaks about the intersection, in her work, of painterly practice with printmaking, collage, and installation. You could say she works in figurative assemblage, pausing first to create her raw materials on the press before collaging them into paint. BYU alumnus Jason Metcalf, recently conspicuous on the local gallery scene, undertakes to fashion a forgery: i.e. a preparatory or explorational drawing, a part of traditional painter’s process that might have been a step on Sidney King’s journey to Kolob, the vast mural he created for the Chicago World’s Fair that now resides in the Temple Square Visitor’s Center. Here one can imagine two opposing crowds of demonstrators: one arguing that religious proselytizing cannot qualify as art, the other that messing with a Mormon masterpiece is mockery. It seems to be human nature to squeeze out the middle in such a pursuit of extreme positions.

Gianna Commito undertakes a self-assigned task that challenges one of the fundamental assumptions of the art market: that each strategy stands apart as a necessary next step. Rather, she reflects on the errors of her predecessors, corrects them, and in the process fine- tunes contemporary history. In “Stow,” she shows how stripes, a staple of decorative pleasure as well as a onetime key player in the insurrection against traditional painting, can help reconcile the pleasures of paint and sculpture, 2-D and 3-D, object and image. Meanwhile, new uses for the power of time to comment on the present are not limited to Barrett’s gender-neutral future. Tia Factor’s “The Farm” contemplates the nature of social idealism through the fate common to so many Utopian communities, while Caleb Weintraub’s “Spooky Action At A Distance” (an actual, scientifically-recognized principle worth Googling) proffers not so much a future as an alternative to now that is part real past and part future in which the same experiences have different meanings.

A future in which the same meaning-infused objects still possess significance, and therefore value, because, as they must, the meanings have been changed and renewed, is as good an explanation as we’re likely to find for why artworks last while so many other human products fade. For the art lover who has tired of standing in the gallery and shouting at the deaf surroundings ”You’re not doing it right,“ here are 22 artists who agree, and who show themselves willing to keep trying, committed to the belief that it is still possible to get it right.

Pure Paint for Now People, curated by Lydia Gravis and Matthew Choberka, is at the Mary Elizabeth Dee Shaw Gallery on the Weber State University campus through April 10.