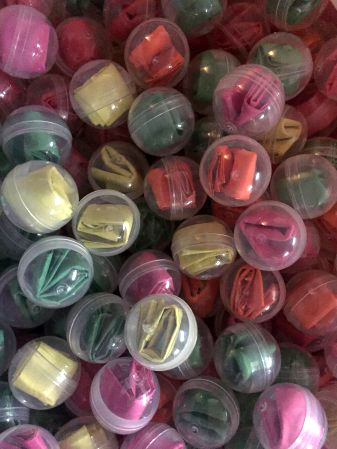 Among the Utah literary set, “south of the border” can sometimes mean Utah County, but with its two major universities (Brigham Young—think former poet laureate Lance Larsen — and Utah Valley—think “sonosopher” and performance artist Alex Caldiero) as well as its robust independent lit organizations, you overlook it at your peril.

Emblematic of that thriving bias for the lyrical is Provo Poetry, founded by local poets Trish Hopkinson and Marianne Hales Harding with the aim of instilling the love of poetry within the general community, bring poems to a wider audience, and support local poets. They sponsor the — now — annual Provo Poetry Contest, a chance for emerging and established Utah poets to get their poetry recognized and the chance for a little cash. The contest provides a reading at the Speak for Yourself Open Mic event at Enliten Bakery and Café in historic downtown Provo, and distributes the works in their POEMBALL machines in Provo and Salt Lake City (see here).

Launched in January, 2016, Provo Poetry’s POEMBALL program uses gumball machines as poetry pushers where you can get your daily fix of Utah verse for a quarter. “We’re thrilled that the POEMBALL machines continue to raise enough funds to not only maintain the costs of materials, but also to provide cash prizes for our second annual poetry contest,” Hopkinson says.

In its inaugural year (2018), the contest yielded more than 500 entries from an impressive roster of Utah poets, including first place winner Michael Mortenson, as well as Rob Carney and Dennis Marden Clark, among others. This year, the contest is judged by current Utah Poet Laureate Paisley Rekdal. The tireless and prolific Rekdal, with her distinctive flair for making poetry and literature relevant in startling and enervating ways, brings a certain cachet to the contest. The deadline for submission is Feb. 1, 2019 (see here for more details).

As a special READ LOCAL feature, we present you with some of the acknowledged entries to last year’s Provo Poetry Contest, including Mortenson’s winning poem:

For Your Essay, Define Greatness

was never a saying, but Paul’s grandfather

said it all the time.

Like the measure of our size against the sun.

Another was “Time keeps running,

so better hug folks while you can.

Start with your grandfather,

leg it,” by which he meant now.

Forty years as a mason.

I’m not smart enough to rocket off

to Jupiter, but I’m not dumb;

I know how to listen.

while getting things done.

melting snow drizzles from the roof
an illusion of a mid-march rain
coriander seed and orange peel fill the air
while mother is elbow deep in flour
her repeated efforts to wipe her brow
have painted her Geisha-like
with porcelain fingers and mindless motion
she kneads like a potter
fourteen mounds inflate in baker’s time
the day’s manna
a cluster of rosemary stars and marjoram
encrusted in the bread of life
I know if I eat, I will be filled
but the deluge of snow in the gutter spout
reminds me that every form no matter how celestial
will fall to earth and expire
a reoccurring wake in search
for yet another morsel

This is how the desert, unhastened, blossoms

as a rose — petals in ruddy sandstone:
crystals splayed about a sunken grief
forming in the bone-dry rock of ages.
Each persists as, all about it, crazing
stone returns to sand, till in the open

sun it blooms in positive relief, an outcrop of the earth’s eternal loss.

It’s this rosetta will instruct the plowman
who in the next great age turns up our bones
to read the extinguished language of our love:
it grew in sand that rusted into silence,
divergent clustered blades that cut against
the grain of entropy, the drift of blood.