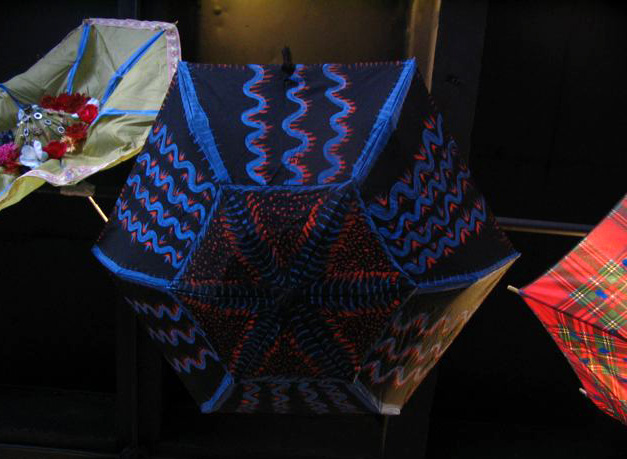 Notions of the artist as informer or even activist are hardly new to contemporary practices, beginning with Conceptual art in the mid-1960s and carried forward through work meant to critique institutions, further commitments to feminism, and raise awareness of AIDS, among many other objectives. In more recent practices, these notions have become ever more convoluted as distinctions between expression and information have blurred, thus leaving the viewer in a more uncertain—but potentially more engrossed—state. Such a lengthy run-up is needed to provide a context for H2O, a series of collaborative, multimedia events taking place in Salt Lake City during the first week of May in recognition of Utah’s Water Week. For it is the de-centered and nearly unwieldy nature of these events that makes them, collectively, such an appropriate meditation on a complex theme.

A joint effort between Brolly Arts and the Department of Public Utilities, H2O by design offers something for almost anyone: visual art, performance, music, and site-specific work, all on the subject of water and water-related issues and presented at multiple venues and on various dates. Perhaps more tellingly, H2O also sets out to be a weeklong investigation of process, as in creative and learning. Process is a peculiar term to apply here, for much of the work to be featured in the events is not plainly about process—that is, it does not seek to serve as evidence of its own creation above all else. However, the temporality of the performances and installations, when combined with their dependence on viewers’ presence to be fully executed, result in an art that is to be experienced rather than merely seen. As Brolly Arts director Amy McDonald Sanyer explains, “A product in and of itself isn’t very interesting to me.” It’s the process that matters.

McDonald Sanyer is uniquely positioned to explore the significance of process. With the founding of Brolly Arts in 1995, she sought a way to address a lack of support for independent artists and smaller arts institutions, motivated by the desire to promote “art and artist as the centerpiece for community awareness.” The organization’s evolution has since been marked by collaborations with the 337 Project and the Salt Lake Art Center, among other institutions, collaborations that make categorizing precisely what Brolly Arts is or does suitably challenging. A dancer and visual artist herself, McDonald Sanyer particularly appreciates the possibilities that such collaboration, not only among individuals and organizations but also among a range of media, brings to the process that is H2O; as she says, “we’re offering so many vantage points,” responses to the literal and metaphorical uses and valuation of water.”

H2O opened this past weekend with dance, film and visual art exhibits at the old Leisure Living Warehouse in Sugarhouse. Local artists |0| as well as students |1|turned umbrellas into original works of art while Sofia Gorder, Larissa Trout and Chia-Chi Chiang presented newly choreographed dance pieces. On Sunday Brewvies hosted three films by Billy Curmano about water-related projects: Swimmin’ the River; Death Valley Desert Classic and Greetings from the Mississippi to the Arctic Sea. This weekend was just the beginning of a weeklong series of innovative artworks and performances investigating and celebrating water.

Many of the week’s offerings, which will come from both Utah artists and artists from across the country, are understandably focused on articulating a sense of place. A contemplative vision of the Great Salt Lake, for example, will be presented with unravel, REVEALED, a 24-hour modern dance and installation work to be exhibited at Westminster College beginning Friday, May 8th. The gallery space itself necessitates innovative modes of creation: as what is essentially a “big glass box,” as described by visual artist Jim Frazer, the shallow gallery is meant to be seen from outside rather than entered into, making the whole of it function like a monitor or screen—a display from which viewers are “somewhat removed, but still watching,” as Suzanne Simpson, another of the collaborators, explains.

On this screen and spilling beyond its borders, a striking spectacle appears: the glass face, the wall behind it, and even the floor have become supports for a large-scale topographical drawing in Flexi-Tape of a section of the lake, its contours echoed in forms that converge toward multiple centers. As envisioned by a third collaborator, Corrine Cappalletti, dancers move fluidly and continuously throughout the interior and exterior spaces, some engaged in simulations of ritual, and futile, cleansings in a pool of cracked mud. Forms of falling pelican carcasses and algorithmically derived sound manipulations further complicate this trajectory of the lake’s passing away; as the level of the water gradually recedes, embodied by the dancers’ pulling of swathes of blue cheesecloth from its support bars and cutting away the transparent abstractions of brine shrimp suspended overhead, viewers bear witness to change and decay as well as to their own awareness that “the lake is going away, somewhere,” as Frazer muses. 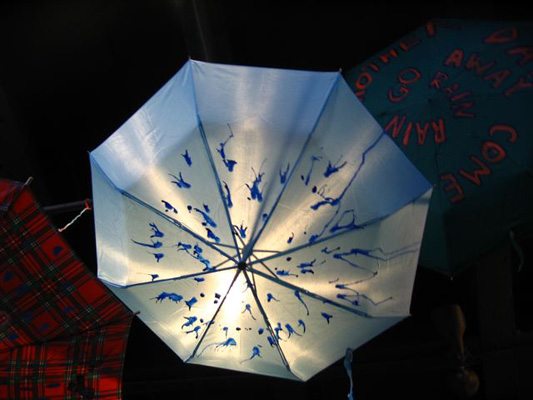 Simpson herself has for years born witness to the lake’s disappearing in the bi-weekly visits she makes there. It was on one of these visits that she encountered hundreds of dead pelicans, splayed and rotting in unison on now-exposed lake bed. Interestingly, Cappalletti had a similar, though separate, experience in seeing the same pelicans. The artists’ bearing witness to this particularly haunting scene became the basis for the work. To add another layer to this idea of witnessing, the installation will also include a stylized, super-sized version of a lifeguard’s chair, spanning the sidewalk in front of the gallery and topped by a video camera capturing the event as it unfolds. With this component, the artists had in mind themes of surveillance and voyeurism, but such documentation too expands the process of the work; as the “surveillance” footage is shown after the fact, viewers continue to engage with the traces of a happening that has already happened.

The Hidden Hollow Nature Park in Sugar House was selected as the locus for installations and performances on Saturday, May 9th because it too offers traces of another time as well as place: railroad tracks, a swimming pool and ice-skating rink, and a partially built sugar mill have all at one point inhabited the site. Reclaimed from dereliction though the efforts of elementary-school students nearly 20 years ago, the park’s emergence runs somewhat in parallel to that of Brolly Arts. Both have developed, are developing, into entities that mold to fit the communities that rely upon them. 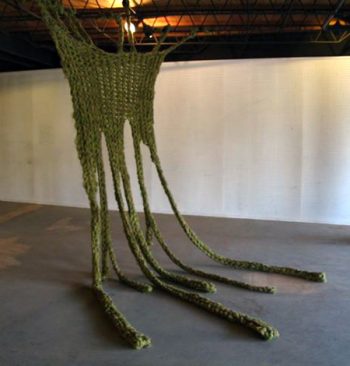 Organized and curated by Salt Lake City-based artist Margaret Willis, the collection of work at Hidden Hollow will speak of differing levels of awareness of living with water—or in the case of other local artists, the lack of water. “Where you live affects your art; it spawns new life all the time,” she notes. Willis will be showing an installation of her own at Hidden Hollow, a series of pyramidal forms that will line the banks of the creek that runs through the site. Constructed of orange fabric stretched over wire armatures and on somatic scale, these forms will echo the positioning of the trees that curve over the creek and the reddish color of the trees’ exposed roots, thus drawing viewers’ attention more acutely to their being situated in this here and now. Willis will construct new pyramids on site throughout the week, and other installation works will be going up as well, together resulting in a space that is ever changing.

In the end, McDonald Sanyer hopes the events of H2O will function as “a roadmap for future ways of learning, ways of leading.” Simpson confirms this, adding that an investigation of water’s political aspects is “not necessarily a negative thing—it’s how you use it or apply it.” The ultimate value in the complexity of H2O is that it asks viewers to grasp work that seems to be everything—object, fact, ephemeron, metaphor, plea—at once, resulting in an experience that stretches them, in addition to whatever else it does. It’s about the process, after all. 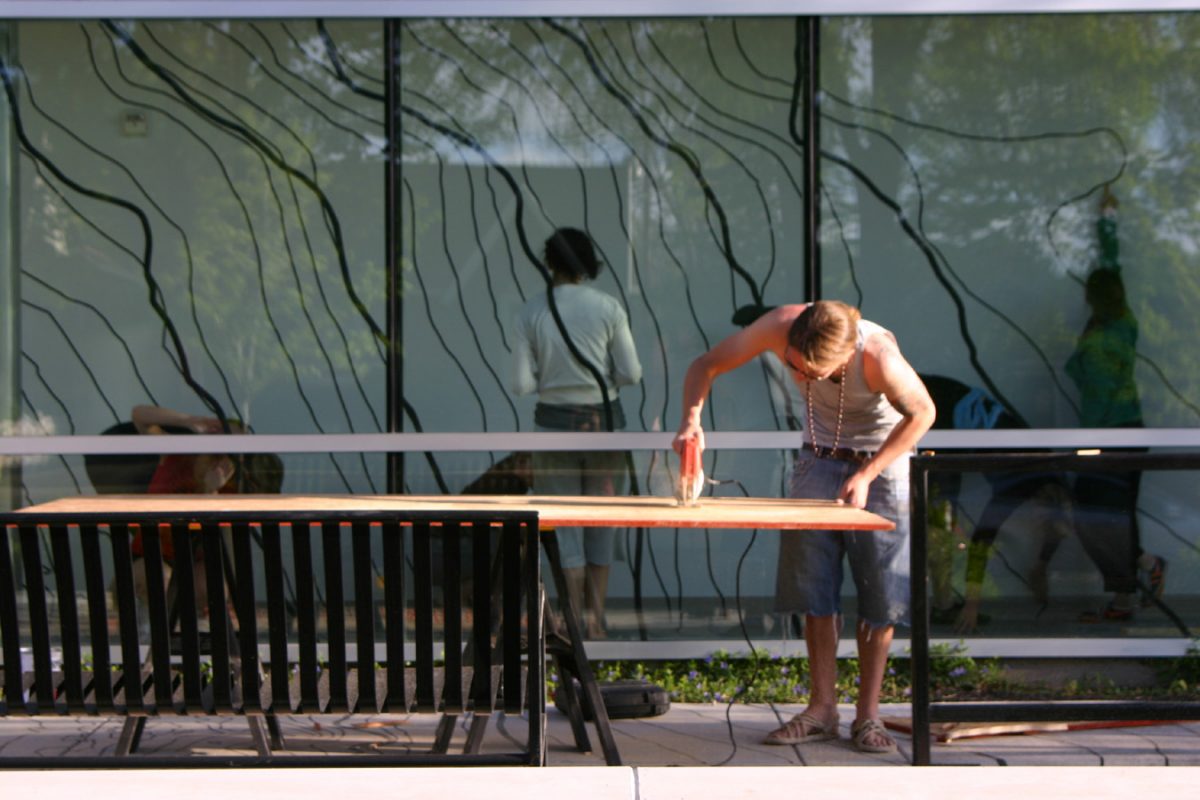 A carpenter works on unravel REVEALED while dancers work inside.

For complete descriptions of H2o events, see brollyarts.org and unravelrevealed.org. unravel REVEALED can be viewed from the 1200 block of 17th South.