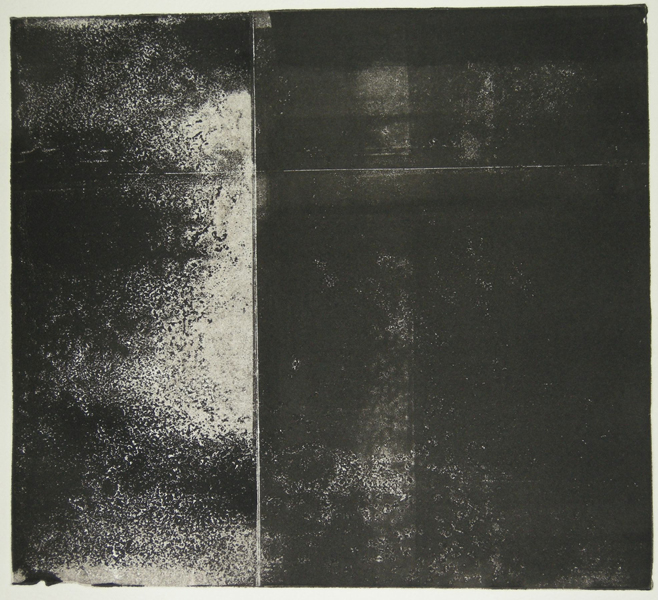 One of the more accessible yet intimate places to encounter new and innovative art is the adamantly casual, dependably irregular gallery that winds among the workspaces and between the furniture at Saltgrass Printmakers. On Friday, May 8, with live music during the Sugarhouse Gallery Stroll, and again Saturday afternoon, Saltgrass hosts the opening of Prints Primavera, the annual spring show of new work by its members. Venerable techniques dating from the Renaissance alternate with experimental methods and new materials, all in works far removed from complacent self-repetition. 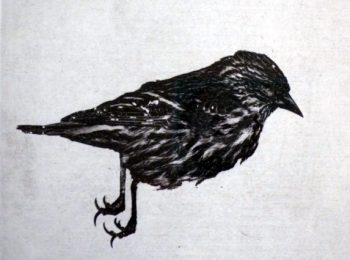 Working against the cliché that spring means bright colors, the palette on view here is restrained, limited almost entirely to the organic colors of a variety of paper fibers, the range of red and brown stains produced by rusting iron, and of course the voluptuous retinal seduction of black ink. Such somber choices underscore the alternately contemplative and unsettling ambiguity of Michael Gaffney’s birds: meticulously drawn representations that lack the context to determine if they are, so to speak, drawn from life or nature morte.

As almost obsessive nature studies they bring to mind Kenneth Clark’s notorious distinction between the naked and the nude, wherein the nude is the idealized, generic image and the naked is a specific individual. Gaffney demolishes such specious distinction by positing, against the idealism of, say, Roger Tory Peterson’s species–identifying portraits, a single bird that while specific and individual is also both real and universal. Rachel Carson’s groundbreaking “Silent Spring” returns to mind with new significance; who knew that her subject species would survive DDT only to succumb to global warming? Here the canary in the coalmine yields to the sparrow in our own back yard.

Gaffney is one of several printmakers at Saltgrass who are experimenting with rust as both working technique and pigment. Oxides are conventionally used as colorants in inks and paints, but using steel plates in place of traditionally more stable copper or zinc offers a more direct and experimental, less predetermined route to oxidizing iron. Catherine Mataisz has chosen to exploit the possibilities very directly in a series of abstractions derived from a single plate with minimal markings and ink applied directly onto a rusted surface. Subtle interaction between rust as a matrix that determines where the ink ends up and as ink itself lends each print spontaneity and, at the same time, a place in an historical series outlining the deterioration of the steel surface. The images, rich textures in themselves, are simultaneously evocative of the behavior of light in space and of surfaces that absorb and reflect it.

The relation between spring and birdlife receives a more conventional thematic treatment in Deborah McDermott’s waterfowl landscapes. One is also straight technically, being printed from multiple matrices that successively build up a composite image, with texture in the background and the foreground details printed last. But in another, composed in depth, McDermott breaks with tradition by printing on separate pieces of paper, cutting them to shape, and gluing the resultant elements onto the print. This relatively new technique is called chine collé, and it can call attention to itself, as it does here, or pass unnoticed except to the most discerning eye. 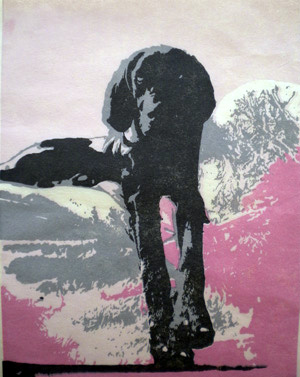 Another artist who uses Chine Collé effectively is Sandy Brunvand, who was profiled in our February issue. The most recent prints accompanying that article used alternating incised lines and brushed figures on contrasting chine colléfields to create a range of effects. Corkscrew lines suggested calligraphy when repeated a few times and a coniferous forest when multiplied and enlarged. In this new work they are repeated until what emerges from the last pass through the press is a kind of moiré texture—like a machined finish or ornamentally plaited hair.

The Brunvand family dog, who appeared in Sandy’s blind contour drawings, also appears here, but in posterized images created by Erik Brunvand. Using black in most of the dog’s figure, pink in the ground, and a single gray plus white in both dog and ground, he conveys a feeling for the animal’s presence that cannot be accounted for entirely by the scant details. A student of print techniques he has pursued around the world, Erik Brunvand is one example of the way Saltgrass links Salt Lake not just with local culture and American art, but with an international movement. 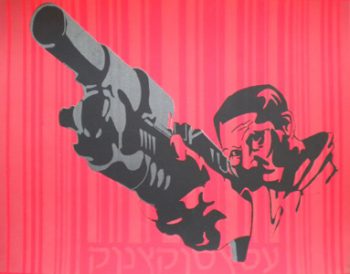 Jared Nielsen’s fantasy violence shows effective use of visual ambivalence. The anonymous figure aiming a high-tech weapon seems more like an idea of power than a fact: more a lesson in power’s projection. What at first suggests blood running down the wall on which he is shadowed rather than projected—made of darkness rather than light—is seen on closer examination to be a bar code, complete with a Hebrew inscription. Just what has been bought, and who pays for it, are questions that remain unanswered.

Joey Behrens began her current project several years ago after bicycling through downtown and discovering the variety of reflected views her new mobility made available. Like a child sitting before a mirror, daydreaming Alice’s excursion through the looking glass, Behrens has pursued an animated perspective on a dance-like vision of the man-made environment. In drawings, paintings, and especially in chine collé prints, she has gradually, as Sandy Brunvand says, “built her empire” of increasingly complex cityscapes. With the arrival of major new construction, towering cranes have come to dominate her skyline. In these new works she splits the chine collé layers into silhouettes that allow her to rhythmically repeat horizons—the visual equivalent of musical canons—and, like Georgia O’Keeffe, create resonance between near and far. 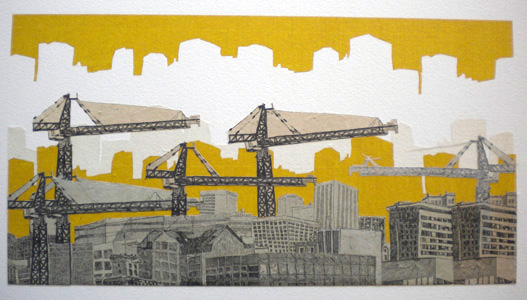 Stefanie Dykes, though also working with rust as a printer’s material, is the last person one would expect to find gathering rust in her life or her art. Rather, this hyperactive printmaker last year broke from her representational repertoire of ornamental devices and surreal juxtapositions in search of a new direction: one less literal and less reliant on narrative subtext. Judging by these first indicators, her signature social wit and commentary are being absorbed into a magisterial vision, along with a singular grace that was implicit in her comedies of manners but concealed in intricately drawn details. The drawing is still elaborate, but more subtle and subordinated into a vocabulary of suggestive layers of rust and graphite marks that evoke the source experience of poetry. The dominant impression here is of plant forms, but like all life and all being, on closer inspection what we see depends on where we choose to stand. The great truth Dykes reveals is that there is no end to patterns, or to our perceiving them. 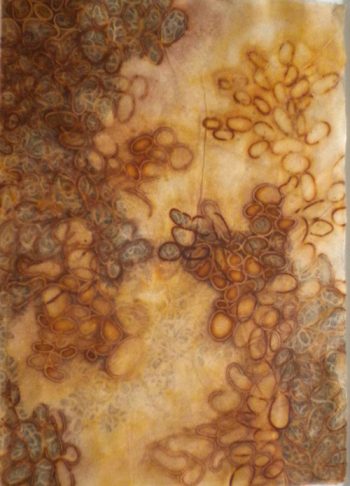 To live in a city where even one printmaker of this caliber is living and working is to be privileged to watch an artistic career unfolding the way a biography is lived. The accessibility of printmaking meanwhile affords us the opportunity to gaze across an entire creative history. Don’t miss the opportunity afforded by this snapshot of nine careers and one truly progressive medium.

Prints Primavera is at Saltgrass Printmakers through June.