Precious Days: Struggle and Art in the Works of Chiura Obata 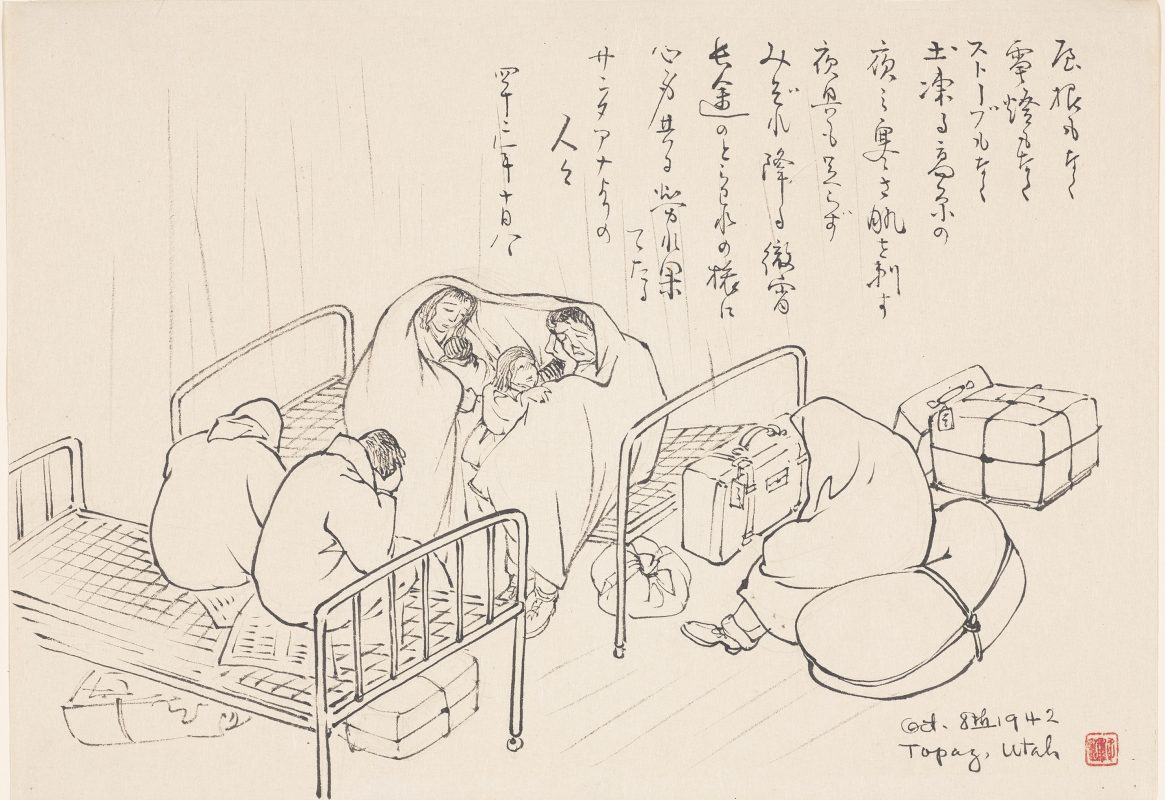 “In any circumstance, anywhere and anytime, take up your brush and express what you face and what you think.”
— Chiura Obata, 1946, as quoted in his book Topaz Moon.

Merriam-Webster defines struggle as “to make strenuous or violent efforts in the face of difficulty or opposition.” As a verb “to struggle” is to wrestle with a difficult transition from one’s present state to a more optimal one. Indeed, the liminal nature of struggle is what makes it an oft-perceived prerequisite of character, and what inspired the titles of many artworks by Chiura Obata. Obata’s seven-decade career evidences his indelible legacy as one of the 20th century’s foremost Japanese-American artists. His work combines vanguard Japanese traditions with an exuberant passion for American landscapes. Tragically, his story is marred by one of America’s most shameful episodes of racial discrimination—the internment of over 100,000 Japanese-Americans during World War II.

On May 25th a significant retrospective of the artist’s life work debuted at the Utah Museum of Fine Arts. Organized by the Art, Design & Architecture Museum at UC Santa Barbara, the exhibition marks the first internationally traveling survey of his work and features more than 150 watercolors, paintings, prints, and screens. Curator ShiPu Wang deftly organized the collection in accordance with Obata’s formative biographical episodes: early nihonga (Japanese-style painting), commercial illustrations upon his arrival in the United States, sumi-e (Japanese ink painting) illustrations, lush Western landscape watercolors, ink scrolls, and woodblock prints, sketches during his time interned at Topaz, and a selection of important post-World War II works. What results is a mesmerizing visual experience that invites viewers to gaze incessantly at each inclusion and marvel at the patient skill and dedication of this most gifted artist. Born in 1885 in Okayama, Japan, Obata expressed an early aptitude for sketching. Often described by biographers as a disciplined, yet adventurous child, Obata exhibited a fascination with natural subjects such as plants, wildlife, and animals from the outset. While various artworks majestically adorn the walls of the exhibition, one may be at risk to overlook the cabinet containing his childhood sketches. The wooden cabinet containing his small notebooks of early colored sketches are visible in both a glass display and in three pullout drawers, and are not to be missed. The delightful sketches show Obata’s prodigious talent and his excellent mastery over line that would continue for decades to come. After immigrating to the United States in 1903, Obata seized upon his talents as a draftsman by sketching the destruction resulting from the San Francisco earthquake in 1906 and working as a commercial illustrator for two Japanese language publications in California. In contrast to the spirited sketches of his youth, his commercial illustrations, on display in an adjacent cabinet, are neatly stylized. As a first generation American (Issei) artist, Obata carried the immense skill and profuse technical training he received during his formal education in Japan with him to the States.

The last few years of the 1920s marked a period of great adventure and productivity for Obata. It is during this time that he traveled across the West and documented his illustrious adventures to California’s great Yosemite and the High Sierra. It is perhaps this period for which Obata is best known. Indeed, his World Landscape Series of 1930 is tantalizing, combining delicately precise ink lines with exuberant modernist colors. One such work, “Mono Crater, Sierra Nevada, California,” could easily be mistaken for the work of a Post-Impressionist or Fauvist. Deep black outlines gradate in their intensity and shape a swirling cascade of blue mountains. Evoking the rich intensity of Van Gogh’s animated trees, Obata’s mountains are emotive rather than naturalistic. Obata commented on the abstract quality of this scene, noting, “in contrast with the beautifully smooth, undulating growth of sagebrush along Mono Lake below, the Mono Crater presents a weird and awesome beauty with its sharp-pointed, rugged and veriformed shapes.” Obata’s “Grand Canyon” is another standout, as majestic redrock are washed in red ink and contrasted with small outlines of rock and shrubbery. In 1932, Obata began teaching as a professor of art at UC Berkeley. President Roosevelt’s Executive Order 9066 abruptly and forcefully interrupted his tenure in 1943, when Japanese-American residents of California were systematically removed from their homes and forced into internment camps across the United States.

Obata arrived at Topaz War Relocation Camp near Delta, Utah, on September 24, 1942, along with his wife, Haruko, and their two children. During his time at Topaz, Obata continued to sketch and paint extensively. He quickly took to capturing the desolate and expansive West Desert of his surroundings, often at sunset and at moonlight. Though decidedly less varied than the sites of his earlier World Landscape Series, his Topaz landscapes are equally sublime—embodying the harrowing seclusion of internment. In addition to his landscapes at Topaz, his internment was marked by a prolific artistic output, including a series of Christmas cards, on display in the exhibition, and a robust series of ink drawing capturing experiences in the camp. Though Obata captures the structures, movements, and figures of Topaz with an almost mechanical precision, a psychological void is apparent in the space in between his sharp and deliberate lines, rendering the harsh emptiness of this experience palpable. After an attack by one of his fellow internees forced Obata to spend several weeks in the infirmary, he left Topaz on May 12, 1943. His post-World War II work bears haunting reminders of his past trauma, while retaining his characteristically academic and lush approach to his craft. Obata’s Hiroshima trilogy is a harrowing glimpse into his post-war psychology. This episode was particularly challenging for first-generation American Issei, grappling simultaneously with the devastation inflicted in their home nation by the oppressive adopted nation that imprisoned them. This series is decidedly abstract, with each work exposing the overwhelming cavern of emptiness inflicted by the atomic attack. While the war inspired in him poignantly psychological works of art, Obata maintained a devotion to traditional Japanese mediums such as sumi-e, watercolor and block printing. Within these mediums, Obata captured various subjects including animals, human figures and floral arrangements. Renowned for the intense dedication and meditative quality of its mastery, Japense sumi-e ink wash painting embodies a philosophical experience for its practitioner. The technique necessitates that its practitioner master the careful balance of water and ink, as well as construct various materials such as bamboo brushes, and an ink grinding stone for proper training. The exhibition showcases the beauty of this revered Japanese tradition by highlighting Obata’s multifaceted work within the medium and the various subjects by which his mastery of the technique is evident. The delicate and precise lines of his floral arrangements show Obata’s strong academic commitment to his subjects.

An American Modern is significant both to the canon of American art, and perhaps more politically, to the examination of America’s wrongs. Though Obata’s work captures—both subtly and blatantly—the tragedy of America’s discriminatory hysteria, it also embodies hope, optimism, and an unremitting search for beauty. Somehow, even in the darkest of times, Obata maintained this sentiment:

“Even though we must spend our days in the middle of a desert, each day is a precious day that contributes to our life and will never return. Half a year or a year can go by as quickly as a dream… Have we noticed the beautiful mountains surrounding us that have existed for thousands of years? They show heaven and earth their greatness. They can’t be moved no matter how many people try. The sun and the moon have been shining for tens of thousands of years blessing the world. The mountains, moon, and sun never try to explain. Whenever dark clouds hide the sun, the clouds will shine with the golden color of the sunlight. At night they will be blessed by the moonlight decorating their edges with a silver line.” Scotti Hill
Scotti Hill received her Juris Doctorate from the S.J. Quinney College of Law in 2018, with a certificate in intellectual property law. She previously received a Master’s and a Bachelor’s Degree in Art History and taught art history courses at Westminster College and the University of Utah. She continues to write for 15 Bytes and the Deseret News.