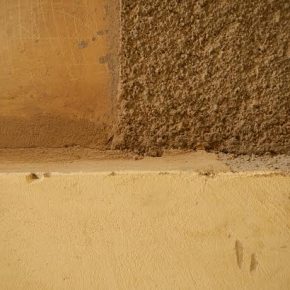 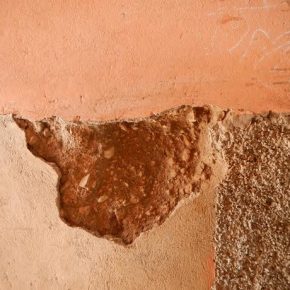 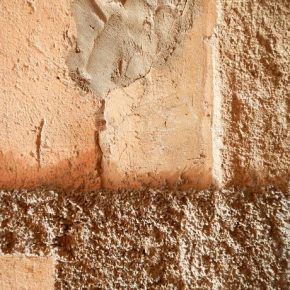 The untitled photographs in Willy Littig’s exhibit Vecinos wander across the walls of Mestizo Gallery like humble pilgrims. Dressed in understated, neat frames, they appear unburdened by worldly pretensions, as if they are on their way to ascetic enlightenment. Littig captured these images on his recent walking pilgrimage along the Camino de Santiago, or St. James’ Way, which stretches approximately 500 miles from the border of France and Spain to the Atlantic coast at Cape Finisterre, (from the Latin for “the end of the world”). The terminal point of the pilgrimage is the Cathedral of Santiago de Compostela in Galicia, Spain, where the ancient remains of Saint James are enshrined. Impressively, the opening reception of Vecinos was not only a celebration of Littig’s completion of the physically-demanding Camino, it was also his 70th birthday party. Surrounded by friends, family, and patrons of his art, his blue eyes standing in electric contrast to his tanned face, he spoke about the personal connections he shares with the images and how they reflect some of the universal questions that motivate pilgrims.

The French Camino de Santiago, and many other routes that connect to it from England and central Europe, has been consistently active since 900 CE. Traditionally, Catholics have made pilgrimage to holy sites as penance for their sins, to reconnect with nature and God away from their daily lives, and to pray for the saints they visit to intercede to God on their behalf. From the Medieval Period to the present, pilgrims have believed in the healing powers of shrines all over Europe, (Lourdes in France is a popular destination for the sick), and have undertaken their journeys in hopes of curing ailments. However, in the past 30 years, pilgrimage trails to shrines in Rome, Canterbury, Glastonbury, Lourdes, and Jerusalem have attracted record numbers of travelers, many of whom identify as nonreligious or as members of non-Catholic faiths. Every pilgrim, secular or not, has a different reason for wanting to journey to the shrine and each comes away with a distinct experience. Littig is one of these modern pilgrims, and captured elements of his journey in the photographs on display.

Several years ago, Littig was in a longboarding accident, and tore his MCL and ACL in his knee. These painful injuries were debilitating. His doctor told him that at his age there would be no point to hope for recovery: he would never move or walk in the same way again. As a lively artist who valued his freedom, this was a serious sentence. He lived with the pain and disappointment for a while, until he sought a second medical opinion. A new doctor encouraged him to undergo surgery followed by physical therapy, telling him that he shouldn’t give up because of his age. Littig recovered his mobility with time and effort. He wryly states that he decided to do the arduous walking pilgrimage, “to try out my healed knee.”

The title of the show, Vecinos, refers to the photographs’ focus on areas where neighboring walls, pavements, sections of earth, or distinct textures join. The small photographs feature meetings of contrasting color, texture, and line, which partially represent the chance encounters (between people, objects, and spiritual thought) that modern pilgrims have on their trek. Although several photographs feature pieces of light-blue tile and yellow-painted stucco so typical of Spanish architecture, most intersections of materials could be found in many locations around the world. This makes the images universal, speaking to the wider experience of all pilgrimages as a series of spontaneous, physical encounters.

One of history’s foremost pilgrimage scholars, anthropologist Victor Turner, describes pilgrimage as occurring in a liminal—an almost magical—threshold space. The liminal rite is one that takes place outside of the mundane, ordinary world. As a result of the liminal space’s novelty and strangeness, people who undertake rites within this context see the ordinary in a new light. Many ancient cultures have marriage, maturation, and death rites that take place outside of town or in a delineated space that scholars see as “liminal.” In a modern world where rites are less frequent or defined, people who seek a way to give their lives more meaning say that pilgrimage helps them put their problems into a wider context, and allows them to appreciate simple encounters. In a way, the gallery space is also liminal, allowing visitors to move slower, observe more keenly, and appreciate “regular” objects that are illuminated by the charged atmosphere that is necessarily separated from the everyday.

Pilgrimage is defined by walking, a type of movement and experience of landscape that is not often part of modern societies, which makes it a kind of physical return to the past. Littig’s images of layers of materials and how they’ve built up over time, but not significantly changed, reflects the timelessness of pilgrimage and how it allows people to experience a lost way of reflecting and observing the small details of the environment. The images show the materials—brick, mortar, wood, and stone—that humanity uses to construct dwellings century after century.

When hearing the artist talk about his work, the thing that is the most striking about Vecinos is how autobiographical the small, unimposing photos can be. The cracks in a stuccoed wall and the bright blue flecks of paint on the photos mirror Willy’s smile-lined brow and lively eyes. The pieces highlight physical signs of aging, and also what it means to be broken and then repaired. Here we see that beaten and weathered objects (and people) can persist through the ages, be stronger after being repaired, and grow to absorb new meaning after being put into a new context.

Littig says he aspires to complete even longer routes, expressing interest in the English leg of the Camino, which starts from the shrine of Thomas Becket in Canterbury, England, and includes a ferry ride from the island to the Continent. Viewers of Vecinos come away with the impression that pilgrimage continues to endure and flourish, even in the modern age, as does the artist himself.

Tagged as: Mestizo Institute of Culture and Arts, Willy Littig