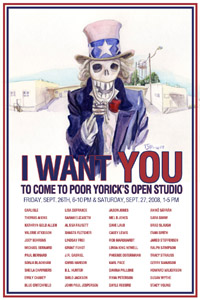 Well, if you’re part of the cool crowd and on the list then you already know about the Poor Yorick Studios’ Private Party tonight from 6 – 10 pm, featuring the bluegrass/roots sounds of special musical guests Pony Ride. If you’re not on that list, you could try crashing the party, or else show up on Saturday for the Open Studio, 1-5 pm, and beg Brad Slaugh to put you on the list for the next party.

For both events Spectrum Studios and Studio 195, just one street over on Malvern, will also be open.