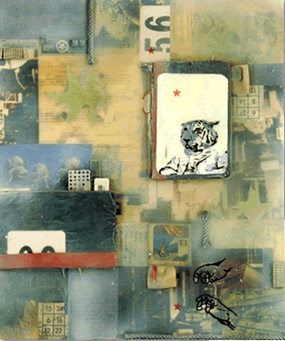 A local Salt Lake City artist has been giving artwork away for free — up to one hundred pieces last year alone. But you won’t find any of that work around town. It has been going to the UK, Australia, Hong Kong and all over the United States.

Jeremy Herridge, director of Salt Lake’s Unknown Gallery, started his “Free Art Campaign” as a way of giving back to the online community that helped inspire him to get back into art making. Herridge is showing this month in a four-person show at the Unknown Gallery, and though the work there isn’t free it is certainly reasonably priced. He will be showing with Montana artists Pyper Hugos, who creates wall-hangings using found object scrap metal, and Jarrod Eastman, a pop-surrealist painter, and Pleasant Grove’s Justin Angleos (below), a multi-media artist inspired by street art as well as canonical figures like Joseph Cornell and Robert Rauschenberg. Poker in the Front, as the show is titled, shows four very different artists each showing artwork that the average gallery-goer may not be comfortable with at first viewing. But this is the type of exhibition you get when you use Myspace as your networking tool.

Newseek recently ran its cover story on Myspace and other community-oriented sites which have become a dominant presence on the web; and Time’s cover story the week before touched on a similar subject. Herridge mentions Myspace a little bit sheepishly at first, knowing the bad rap the networking space has been getting in some circles. But, he points out that it is a great tool to get connected to people with similar interests. He used Myspace when putting together Unknown’s second annual Board Show, which was up in January, and it was through that show that he found the other three artists in this month’s exhibit. And it was another community-oriented site — devoted to stencil art — that inspired Herridge’s recent art making and resulted in his world-wide, no-strings-attached, dissemination of free art.

In early 2005, Herridge posted a message on the forum section of a community-oriented site devoted to stencil art (a site which will remain nameless to protect the not-so-innocent). He announced that, in order to thank the community in that forum, he was willing to send a free piece of art to anyone who sent him their address.|1| Within a week, the first pieces were sent out and a couple months later the number had reached 100, at which point Herridge, exhausted and, one has to guess, a little cash poor, had to put a hold on the project — to the chagrin of some members who came to the forum posting late.

But at least Herridge was working again, and Poker in the Front attests to his new creative energies as well as what can happen when the Internet is used as a marketing tool.

Herridge’s work in Poker in the Front is different from the work sent around the world. |2| It still has a sense of the vitality of the stencil art which inspired his free art campaign, but it has become less structured, and more intricate in its line, the drawing and forms spreading across the entire surface of the work. The work is done in a naive hand — Herridge says he is inspired by outsider art — and includes strange figures (Mexican wrestlers being one of the artist’s favorites) and strange combinations. In “Digestion Suggestion,” a drawing of an octopus wrapping its tentacles around a discw is combined with a collaged image of Christ in Gethsemane.|3|

An enthusiasm for collage and juxtaposition is also important for Angelos, who shares the gallery’s west wall with Herridge. Angelos is a recent transplant from California who, with a day job that keeps him traveling around the country and so requires no specific home address, chose Pleasant Grove as an affordable place to live. His home in Utah County may be out of the mainstream art world, but it does provide him with an extra large garage where he can store tons of, well, junk. Old wood, waste material, garage-sale figurines, an old pack of cigarettes, multiple building products from Home Depot — this is the palette for Angelino’s work. Angelino says his mother’s career as a florist is probably what inspired his creative process. Years of watching her assemble floral arrangements convinced him that the act of putting things together could be as artistic as applying a brush to a canvas. 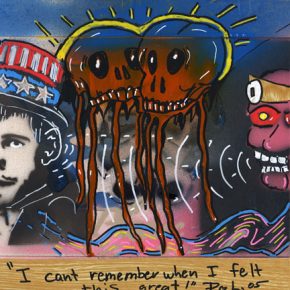 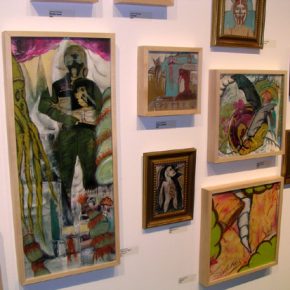 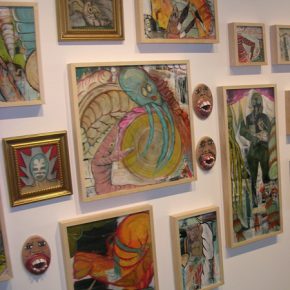 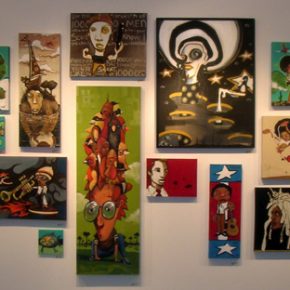 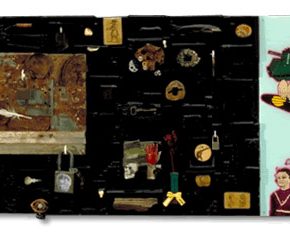 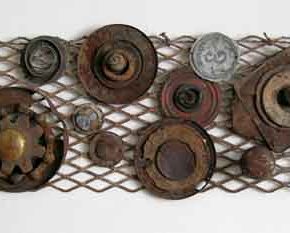 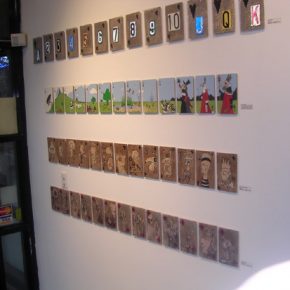 Angelos does know how to use a brush — a couple of his street-art inspired works are on display — but his current interest is in assembling and collaging. His collages, which can include such disparate objects as landscape paintings, leaves, and bingo cards, are slightly obscured by a thick layer of resin applied to the piece, which serves both to unify the colors as well as give the piece the feeling of being a complete object rather than the pasting together of different elements. Angelos’ resin is something you might find in the building materials at Home Depot, which is where he also probably bought the foam material that engulfs some of his other works. One such work, “Jaundice Dog,” was inspired by a recent trip to one of the many new Art Expos popping up around the country. Angelos expected to see a lot of exciting work there, but what he found, instead, were dogs: dogs in acrylic, dogs in oil, dogs in watercolor, dogs in an impressionist style, dogs in an expressionist style. His sardonic salute to the art expo experience features re- and pre- sentations of dogs, from a drawing of man’s best friend to actual canine bones. The combines of Robert Rauschenberg are obviously on the artist’s mind, as is evident in “Tank Rauschenberg,” a black plastic toy tank sprouting raven wings. Joseph Cornell is another strong influence in Angelos’ work, inspiring much of the curiosity box like structure of pieces like “Dream of the Pink Pigeon.” |4|

Pyper Hugos and Jarrod Eastman, who occupy the gallery’s east wall, are husband and wife artists who live in Bozeman MT. Hugos’ works are found object assemblages that use rusted metals as a palette to create works that can be strong and harsh in their totality but surprisingly soft and rendered in their specifics. The surface forms of some of her rusted materials are gorgeous and the teals and reds in the rust are very pleasing. But these soft and delicate effects are placed on a thick, hard wire structure. Much of her work concentrates on minimalist designs, and these seem to be the best of the work. |5|She also has a couple of pieces that employ found wood with little metal birds. These pieces seem more appropriate to an art fair than a gallery setting. But this exhibit is cautioning me to reserve my judgment as to what belongs where. What a lot of this art does is question what can be considered fine art.

Eastman’s paintings seem to do this the most. For a long time (close to a hundred years) artists have been introducing “non-art” materials into a fine art setting. But often this art gets incorporated into the “serious” tradition of fine art. Eastman’s art, though, comes out of a pop culture that most gallery goers may not yet be comfortable with in a gallery setting. Eastman’s paintings are executed in a flat, straightforward manner and peopled (or “animaled”) with figures from the artist’s imaginary world. What you might think at first look is that these are “painted” cartoons. And it is certainly from cartoons — as well as illustrations, skateboards, and pop music — that these paintings are derived. |6| But, just because the figures in these pieces might remind me of Saturday morning cartoons, or graphic novels encountered in High School, does that exclude them from gallery walls?

A chance glance taken while I watched the artists hang their work made me ask just that question. Scanning the room, I caught a portion of Eastman’s “Bent Feathers” which was partly obscured by a couch. A couple of the birdlike creatures in the painting quickly called to mind one of my favorite paintings when I was a college student in Belgium and used my student ID to hang out at the National Museum of Art on a regular basis. Brueghel’s “Fall of the Rebel Angels,” with its angels of the impossibly thin arms and hardly terrifying menagerie of demonic creatures is a type of art not unlike Eastman’s. Brueghel delighted in the folk imagery of his predecessor, Bosch, and was derided by some of his contemporaries for not following the refined forms of his fellow painters in Italy.

And I rather like Brueghel, so I was not too quick to dismiss Eastman and came to enjoy his painted world, where everyone seems to have an onion-shaped head and Godzilla-like creatures invite young children for a ride on their spaceship.

Some of the work at Poker in the Front may turn you off at first. Pyper’s metal fences, Angelo’s hardware and junkyard materials, Herridge’s scribbled line and Eastman’s cartoon world may not be what you are used to encountering. Maybe the “poker” of the title refers to the gamble of making and exhibiting non-traditional art; or maybe it refers to the process of assembling materials to form a winning hand; or maybe it refers to the gamble of opening yourself up to new things: new materials, new styles, new methods of marketing and networking, new ways of conceiving art.

Or maybe it just refers to the set of playing cards — each suit created by one of the artists — hanging in the gallery entrance.|7| Check the show out. All you have to ante up is your time.

Images from Herridge’s free art campaign can be seen at his site, everydayisabonus.com. Poker in the Front is at the Unknown Gallery through April 14th.