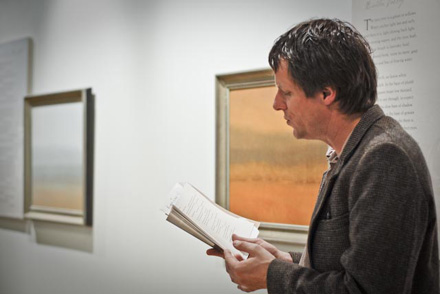 Poetry readings are tricky things. At a reading you are a prisoner to the artist in ways you rarely are at exhibitions. A poet’s reading of a poem can give thunder and lightning to the written word (Dylan Thomas reading a credit card contract could make it a spiritual event); but it can also obscure the beauty of a finely crafted stanza in the fog of pretension, poor pitch and (if you’re sitting in the front row) spit.

Years ago I attended a reading by Robert Pinsky at Westminster College. Pinsky’s punctuated reading, and his overly-enthusiastic (and to my mind unneccessary) explanation of the banal line, “maccaroni mist” (it’s the steam that fogs up your kitchen window when you cook pasta), left me with such a poor impression that years later I can’t look at one of his poems without prejudiciously hating it.

So it was with some apprehension that I found myself sticking around the Evolutionary Healthcare Gallery on Friday night to hear local poet Joel Long read the seven poems he wrote for seven of the paintings by Dave Hall on display at the space. Long and Hall share a love for the Missouri River country of southwest Montana, a locale that inspires their respective arts. For Hall’s show last year at Phillips Gallery, Long surprised him with three poems inspired by Hall’s paintings. And so the seed for the current exhibit, Seven Poems and Seven Paintings, was planted.

I was presently surprised by Long’s readings of the poems — heartfelt but emotionally continent, delivered in a husky voice that exudes the sense of hush that pervades Hall’s paintings. The poems are quiet works, full of soft syllables, meandering across language like the curving course of a river on the landscape.

Poetry readings are a risk, but they can call forth delights that lie inert in the printed word. One of these are the mis-readings, the slips of the tongue that can change the poem, or at least a line of it, into something new and equally delightful. In Friday’s reading, a mis-print served this creative role. Next to each of Hall’s paintings a large placard with the full text of the accompanying poem was displayed. A typesetter’s mistake in the printed text of one of the poems turned the original and voiced “But scent is slow, lingering in the cooling air” to “But scent is slow, lingering in the cooing air,” an equally if not more evocative line.

Seven Poems and Seven Paintings is at Evolutionary Healthcare (461 East 200 South, SLC) through April 9. Watch Joel Long read a selection from one of his poems on YouTube.

When poets and painters meet it’s a good thing. Think Guillaume Appollinaire and Pablo Picasso. Or John Ashbery and Andy Warhol. So we can only hope that there will be more fortuitous collaborations like this in the future.

Don’t expect all poets in our midst to embrace the local art scene. On the same night I attended Long’s reading I learned of another local poet’s opinion of Utah art. On her Facebook page one Salt Lake poet updated her status with “gallery stroll to look at bad art,” which need not mean her opinion of the local scene is that it’s entirely bad (she could have been going to a specific show that was bad, or heading out with the specific mission to find bad art), but it does give one that impression.