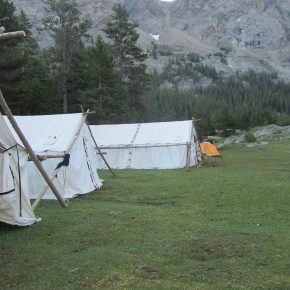 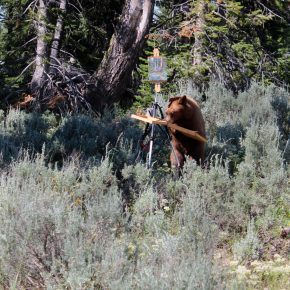 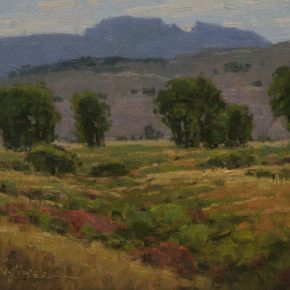 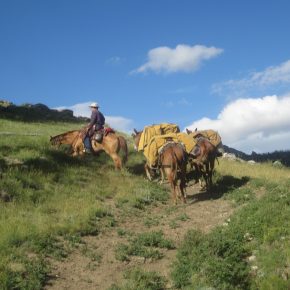 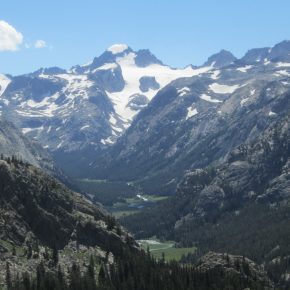 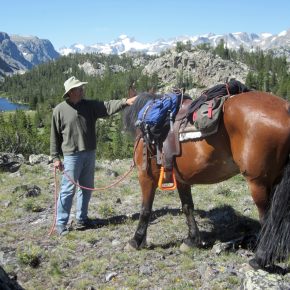 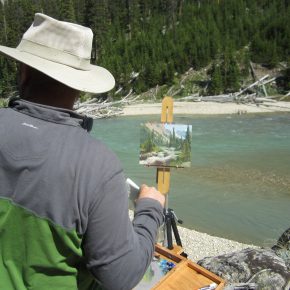 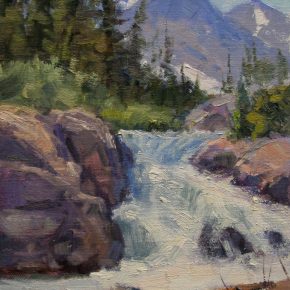 The thing I love about this event is that I don’t have to be anywhere for days on end, which gives me the freedom to roam to my heart’s content. My method for picking painting spots on any given day is dictated only by which way the wind happens to be blowing. Typically, I will set out in the morning with my painting gear, lunch, cooler of water and lounge chair (in case I want to nap under a tree) and set off with no particular destination in mind. This procedure works well for me and suits my personality quite well. One day I might get three field paintings done and on another maybe only one; it doesn’t matter, the main thing I am after is to have the painting sessions filled with a give and take with nature that is inspiring and rewarding in a visual as well as emotional way. If I can accomplish this, I feel that the painting produced will speak to others as well as myself. Put another way, the painting, as a product, will take care of itself as long as I remain in the moment, and enjoy the process more than I worry about the outcome of the work.

This year was notable due to the abundance of bears in the park. One day after finishing a painting session down at String Lake I noticed an artist friend, Wes Newton off to the side of the road, painting near a thicket of trees. I pulled over and went out to talk to him, when all of a sudden we noticed some people waving to us. Thinking they were just interested in painting, we waved, but didn’t pay much attention until we heard a cracking noise coming from behind the trees where a bear appeared just a few feet away. Of course, we backed off and let Mr. Bear have plenty of room to do what he pleased. His first stop, you guessed it, was Wes’s easel with his field study still attached. By that time I figured that Wes’s painting was toast, especially when the bear got up on his easel. Amazingly though, even after pushing down on the palette and taking a lick of only the blue paints, the whole setup survived along with the painting!

After that we decided to take a walk down to Leigh Lake to find some painting locations, and on the way back to the parking lot we were cut off on the trail by a another bear. This time we stayed back, but followed, stopping along the way each time the bear stopped to dig under a log or turn over a rock. We stayed with him for about a half mile until he veered off the trail right before we reached String Lake. As we came out of the woods into the open, I noticed a family having a picnic dinner by a campfire and went to warn them that a bear was approaching in their direction. They thanked me, but I didn’t get the impression that they thought my warning was credible, until I noticed them all scattering in different directions a few minutes later when you know who showed up! Funny thing was he walked right through their camp and into another family’s picnic. The last time I saw Mr. Bear he was laying on the ground eating a bag of potato chips! Someone told me later that about 15 minutes after that, a ranger came roaring down the road in his truck and turned into the String Lake parking lot like he was going to a fire. Wonder what that was all about!

After the Rocky Mountain Plein Air event, I was off again to the Wind River Range for a week of painting in some amazing country. It was a small group, just Wes Newton and I, since a couple of others had to drop out at the last hour. Clayton and Mitzy Voss of the Lazy TX Outfitters were understanding about the low numbers and worked with us anyway.

First of all, we’re talking about a nine hour horse ride into base camp near Gannet Peak (ouch!). But the good news is that we made it. One of the wranglers explained it to us this way; if the stirrups are too short your knees will ache, if they are too long your hips will ache, but if your whole body aches, they are just right. Yup, they must have been just right! I was actually amazed at how well we did since neither of us was used to riding, especially that far. We soon became accustomed to life in the saddle though, and made daily trips out into the backcountry with Chuck our guide, our horses and another pack horse to carry our painting gear. Chuck was great company, quite a historian on the local area as well as an expert on the terrain. Each day after a great breakfast that Mitzy cooked up for us we headed out to paint in the pristine environment. She would also pack us a lunch and Chuck would lead the way until something caught our eyes to paint. At that point we would unpack and paint for hours on end while Chuck would sit back and spend the day reading a good novel or just enjoying the scenery he loved so much. Life was good, and we had everything we needed. All week long I rode a horse named Peanut and became accustomed to his ways. One thing I caught on to early was Peanut’s habit of trying to brush me up against a tree or a bush that was near the trail. After learning his quirks, it was easy to anticipate a situation up ahead and overcorrect before it became a problem. Peanut was part draft horse and was a powerhouse who did a lot of the heavy work like dragging logs when he wasn’t on a pack trip. On the last day just before our return trip back to Dubois, the Wranglers decided that Peanut should stay behind so they could get some of the heavy work done. Consequently, I rode out on another horse that I wasn’t used to. About a half hour into the return trip we hit a sandy area on the trail that seemed routine until my horse went down to his knees. At first I thought she was sinking in, until she went all the way over on her side with me on her back! I didn’t know what was going on and wondered if she was dying. The next thing I knew, I was on the ground with the horse on top of my leg. It was a tense few moments to be sure, but because of the sandy ground, I was able to pull my leg out from under her with no apparent injuries. Chuck rushed over right away and pulled on her reins until she was able to stand back up. The only thing he could figure was that she liked the sand and decided to roll on her back with me riding her! It was a close call for sure and one I am grateful for not being on rocky ground when it happened.

The whole experience this summer was awesome! I met some really good people, made some friends and learned a lot from others. If Mitzy Voss ever makes a cookbook I told her I would be her first customer! If you are thinking of a trip into the Wind River Range I would recommend the Lazy TX Outfitters for their professionalism, knowledge of the terrain and friendly down home ways.

Until next time… John-