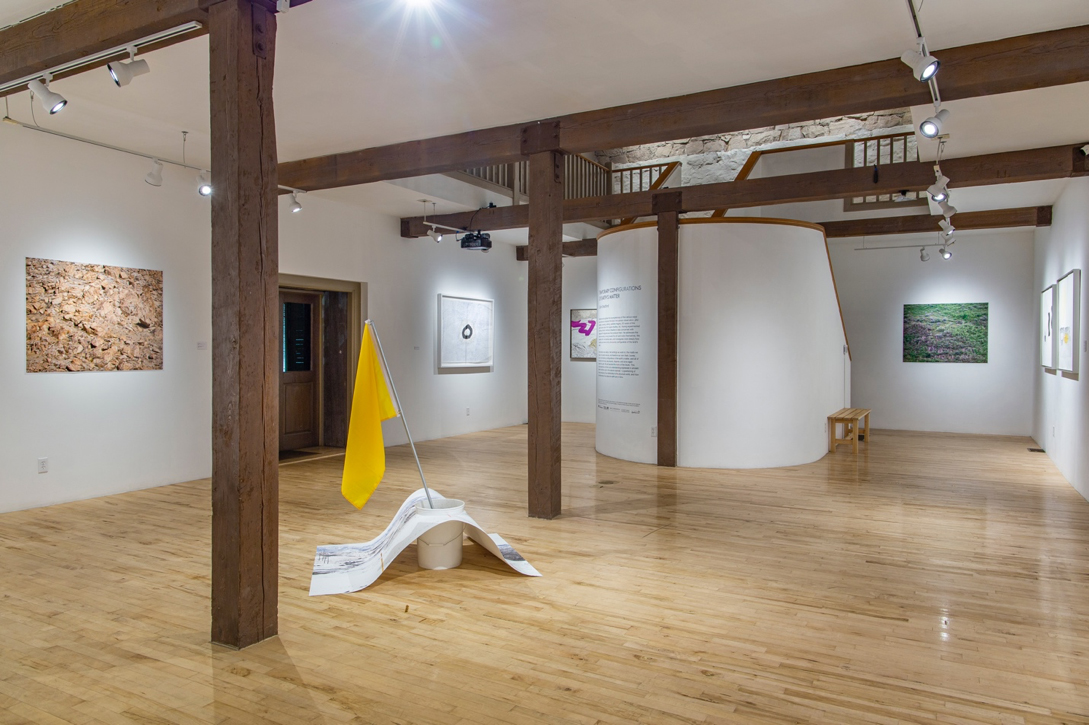 With Temporary Configurations of Earth’s Matter, Collin Bradford has organized a space to contemplate our relationship with the land. This question is a difficult one, in part, because the relationship we have with the land is as unique as each individual; but the questions that arise from it are particularly germane to our place in the world. Utah has an immense proportion of land dedicated to public access. In some ways, this makes Utah a litmus test for this interaction of land and its inhabitants.

The exhibit, at The Granary in Ephraim, presents an aesthetically clean, analytical treatment of the subject. It consists of a number of uniformly large photographs and mixed media works on paper, marching along the walls in neutral-colored, floating frames. The works are not large enough to engulf one’s presence in the space, and they are not small enough to be objects. They are windows onto the space of Bradford’s consideration: what is the nature of the matter that surrounds us, that we stand on, walk through and consume?

A first reading of the work seems to suggest an intellectual, detached relationship to the landscape: Bradford’s photographs tell us about the texture of a location, but not much else. They are like studies of natural forces whose movement is too slow to detect in the still picture. These images contextualize his drawings like a theater backdrop that runs parallel to the action happening in the mixed media works. 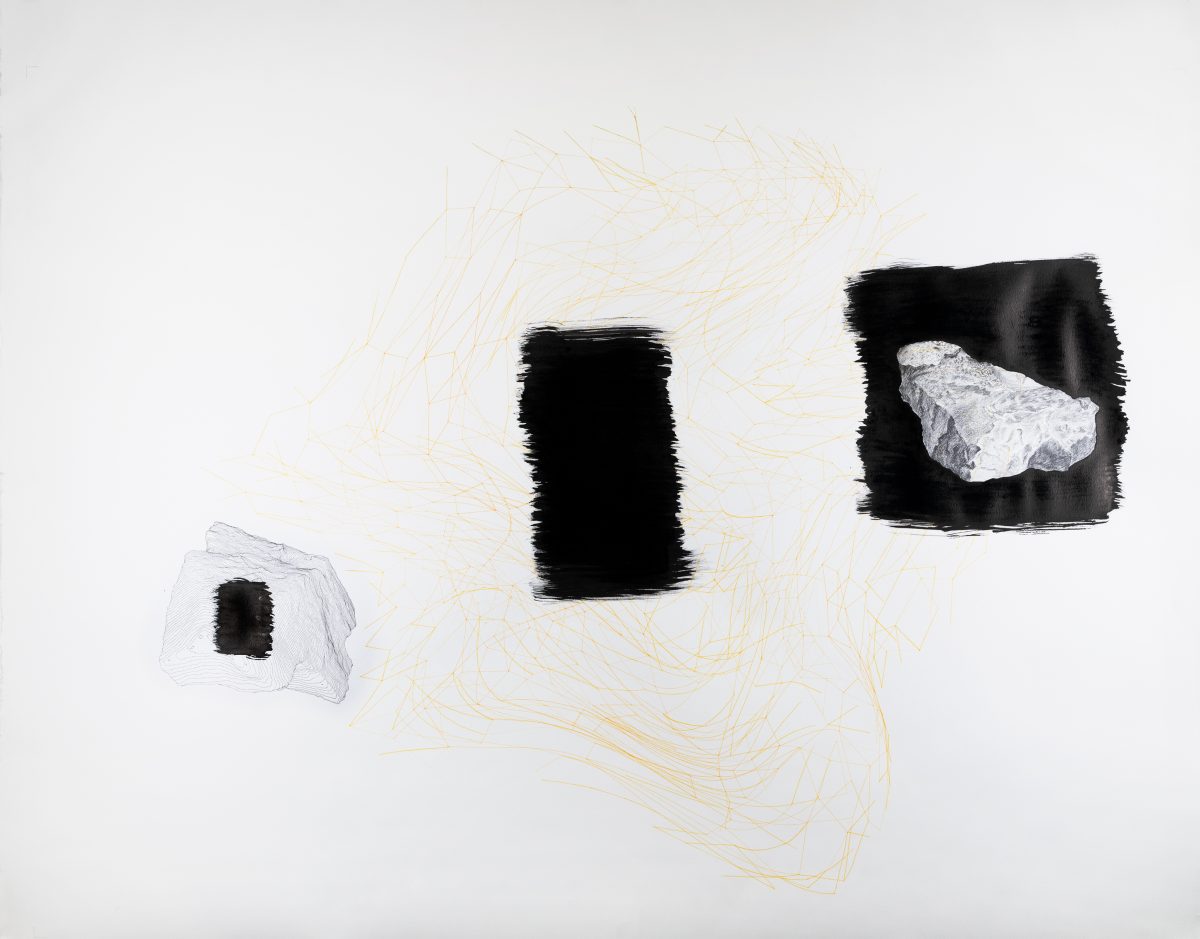 Surrounding the photographs are collages made up of fastidious drawing, digital point-maps and webs of spatial information. The work has a detached design aesthetic that would feel at home inside a glossy tabletop book of contemporary architecture. Many of the compositions have the neutralizing manner of a scientific illustration, locating the salient parts of the design in the center of the page, in a way that is either meditative or naive.

Bradford is anything but naive. His body of work displays a long consideration on the relationship of humans to their environment. Many of his works move in broad strokes, taking data sets — lists of words, computer algorithms, maps and geolocation information — and forming them into aesthetic objects. These data sets are presented in a way that considers our relationship to their meaning. In this exhibit, he uses this strategy to good effect: digital maps of landforms that serve as the basis of these works are erased into and built over, like the landscape itself.

Bradford says the seeds of this work were planted three years ago, as he was planning to move his family to Utah. Having grown up in the eastern United States and the Midwest, Bradford was relatively new to Utah and he wanted to initiate a relationship with its landscape. Where his early relationship to the landscape was established by looking through dense, breathable layers of deciduous forests, in Utah, he would be exposed to the craggy backbone of rock that reveals the earth’s tectonic crust. Geologic time is exposed in Utah in a way that he had not experienced before. Recognizing this, he started to download GPS maps and NASA satellite pictures of the state. This was a starting point to understanding the place he would be going to. There is a stillness in this work that suggests that the timeline of our relationship to eath’s solid matter is fleeting. Bradford is addressing the notion of a larger, geologic time; and humanity is just a short pause in that schedule 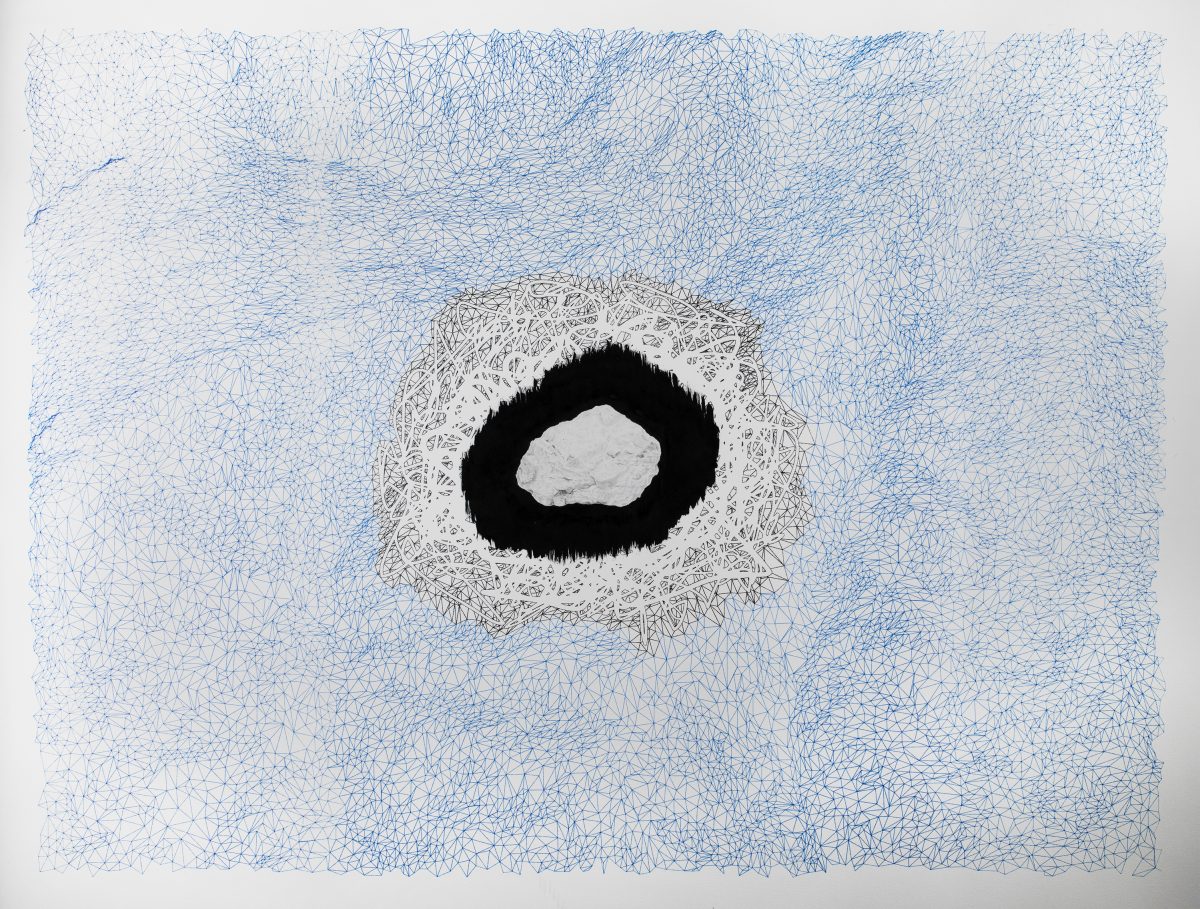 One work, “Rock 6 (40°42’07.8″N 110°56’57.6″W),” sets this relationship in perspective. We see a careful rendering of a rock on a mat of Sumi ink. Behind the rock, or perhaps the backdrop of the rock, is a texture map of a landscape, broken into points: a digestible way for a computer algorithm to understand the complexity of space. The composition is a Zen garden, inviting our contemplation. We sit on our own mat, next to the rock, and ponder just how little this piece of matter has changed over the millennia, a reminder of our own short space here on the earth.

This contemplation of time and matter is also reflected in Bradford’s more complex compositions. In “Bingham County Mine,” he utilizes a number of methods to illustrate and interpret the terrain. Woven within this space is a set of calligraphic marks that move across the space in the same way that graffiti might challenge a homely cement wall. The thin, black outlines of the marks flatten them into a design, but the interior of the marks carve away at the space, like a backhoe digging into the dirt of a new real estate development. These graffiti marks add an elegant aesthetic touch to the works, but also question our effect on the land within the vast timeline of geology. According to this scale, both the graffiti on the wall and the backhoe’s cuts into the landscape will not last long enough to make a significant impact.

In a place that is anticipating, even expecting, an explosion of population growth in the next fifty years, we must consider our larger impact on, and relationship to, our ecosystem. Bradford’s work allows us to see that relationship from a bird’s-eye view; far enough away that our collective temporal insignificance becomes apparent, making clear a more metaphysical relationship to a place whose craggy spine we call home. 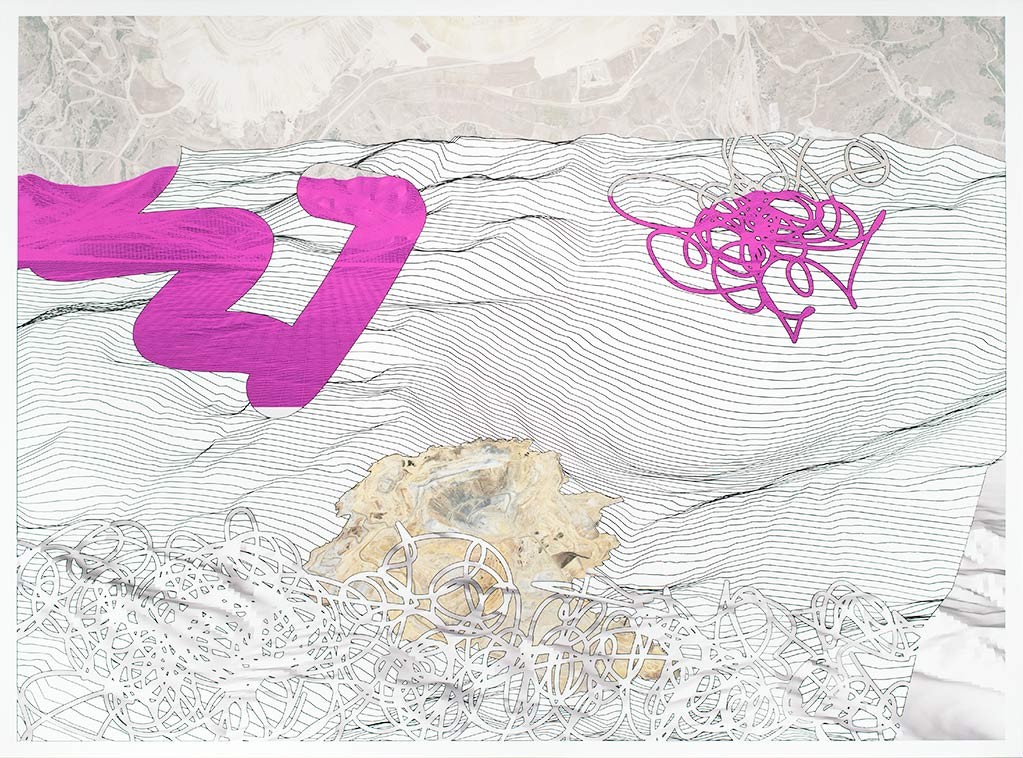 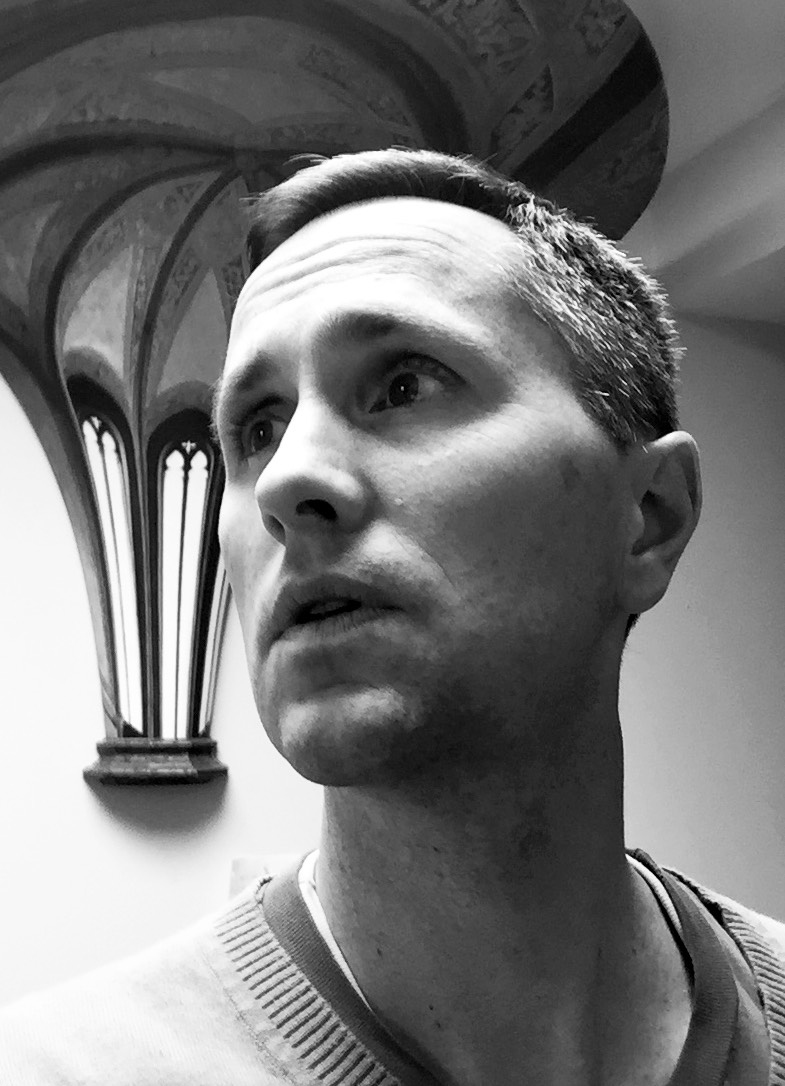 David Lindsay was raised in the San Francisco Bay area and received his Master of Fine Arts from Indiana University of Pennsylvania. His work has been exhibited at venues such as the Arte Laguna Exhibit at the Arsenale in Venice, Italy; the Georges Enescu Museum in Romania; the SACI gallery in Florence, Italy; the Contemporary Art Fair in New York City; Monchskirche Gallery in Salzwedel, Germany; Principle Gallery in Alexandria, VA; and Craighead Green Gallery in Dallas, TX, as well as numerous group and solo exhibitions throughout North America. He has served in the College Art Association and has recently left his position as Associate Director of the School of Art at Texas Tech University to work as the director for the nonprofit arts organization, www.sitessetforknowledge.org. He currently lives in Provo with his wife, the artist Sara Lynne Lindsay, and five children.