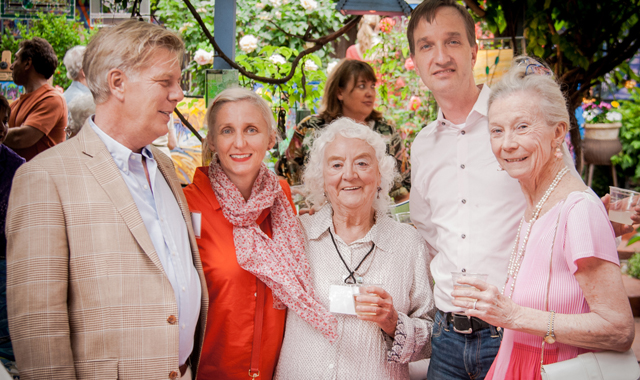 Salt Lake City artist Pilar Pobil was the subject of one of our earliest artist profiles, which appeared in the May 2002 edition of 15 Bytes. Even then the Mallorca, Spain native was an established fixture in the Utah art scene. Her colorful paintings, held together by a sinuous line, were already in most public and many private collections. Her Art in the Garden event, held annually in June and featuring the work of local artists in the unique setting of her garden, was and still is one of the highlights of the summer for local art lovers.

At 86 Pobil is still very active creating new works, and has no plans for an imminent departure, but a group of art enthusiasts who have come to love the unique setting of her home and the impact of her art have decided to get busy now to perpetuate her legacy.

Brent Cameron, a long-time friend, his sister Daryl Barrett, and Patrick Hoagland (of Patrick Moore Gallery) have been brainstorming for years of a way to keep the house as a local art treasure, but couldn’t find the right solution. Pobil was passionate that the house serve the arts and the community. When Kate Duffy heard about the project, she suggested they incorporate as a non-profit. “Pilar is the reason I started painting again about 15 years ago,” Duffy says. “Her work and her story, along with Pilar herself really inspired me to get back to my artist self.” In March the group filed the paper work to incorporate as the Pilar Pobil Legacy Foundation, with plans to eventually buy Pobil’s house from her estate. The artist has agreed to donate the contents of her home and all the artwork to the foundation.

“One of the objectives of the foundation is to continue the annual Art in Pilar’s Garden, provide educational programs in many arts genres for the public, and offer the home as an artist residence to visiting artists in exchange for workshops, performances and master classes,” Duffy says. “Much of the programming will begin during her lifetime.”

Indeed, in July the Pilar Pobil Legacy Foundation held its first event. On July 10-11, they invited sixty-five students from Guadalupe School to the house for an art workshop. The students took the work they began at the house back to their classrooms to finish. They will display the final pieces in Pilar’s garden on Saturday, September 7, 4-6 pm, in an exhibit that will be attended by the students’ family members and invited guests.

Two more events are planned in the coming month. On Thursday, September 12th, Pobil’s daughter, Monica Pasqual, will give a concert to benefit the foundation. Best known to Salt Lake audiences as one of the quartet in the acclaimed Bay Area-based band Blame Sally, Pasqual will be performing with Pam Delgado (also of Blame Sally) and Josh McClain. Pasqual is the winner of 5 Independent Music Awards and Six Emmy Awards. She will also conduct a songwriter and creative writer workshop on Saturday, September 14th.

Finally, on October 4th, from 5-9 pm, the foundation will host My Burial Chamber: A Celebration of Life. The exhibit tells a visual story of Pobil’s life through her “burial chamber.” Originally presented in 2007 by the Utah Cultural Celebration Center, Pilar has chosen to resurrect the exhibit to close out the summer’s activities. In older cultures, when a person who during hers or his lifetime had done significant work that was worth preserving, all the objects that she or he had used would be collected in the Burial Chamber to provide the means to continue their work in the ever after. Also included would be images of loved ones as well as pets and other memories. Pilar’s exhibition will include photos, angels, a sewing machine, painted objects, cooking utensils and pots, paintings, fashion creations, embroidery and other items that she has considered central to her life. The music of Ravel’s Pavane pour une infante défunte (Pavane for a Dead Princess), with its slow rhythm and repetitive cadences, will provide the perfect background for the Chamber.

Funds raised during these events will be used to purchase the home and will be held in Trust until the sale takes place. Program funding will be utilized now to develop and execute programs that Pobil will have the opportunity to oversee.