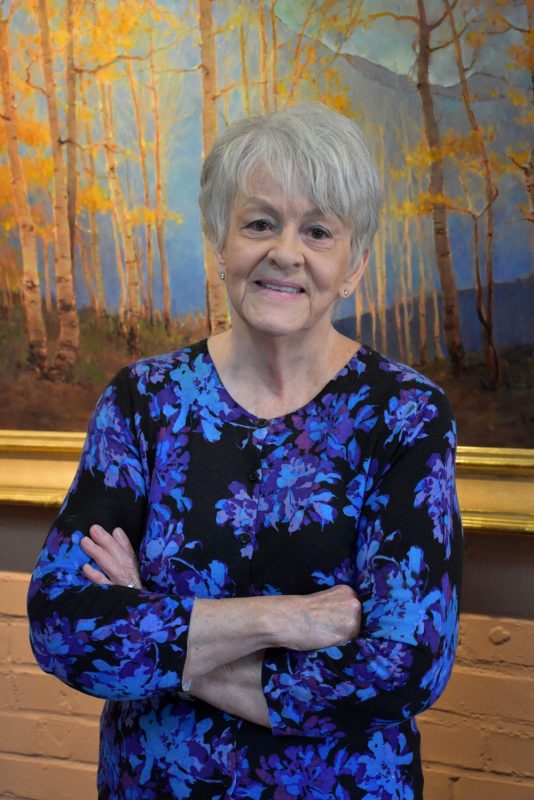 When Phyllis Forsey left for New York City in 1957, she was not headed for The Art Students League like some of her Utah peers. She took a more circuitous route to a painting career.

Forsey had just finished her freshman year at BYU, where she had taken several art classes and “painted the flora and fauna and the figure,” but also realized how much she liked to sew. In a pattern book, she discovered an opportunity to study fashion design back East for a year. (“You’d never know it to look at me now,” she says with a rueful smile. “I like to be comfortable.”) After talking things over at home in Richfield with her mother, where her father had the Forsey’s Ice Cream plant – and Phyllis would pitch in summers making popsicles – she determined to leave.

A gutsy move for an LDS girl from a small town in an unknown state, and she indeed felt like a duck out of water for a while around the sophisticated group at the Fashion Academy in NYC. That was until she located a “great” ward and, within the week, had an apartment with two roommates. They split the $140 a month rent. She met her husband-to-be, a medical student, at that same great ward and, after finishing her fashion illustration training, Forsey went down to the Garment District and landed a job drawing fur coats. “Then [the owner] found out I could sew, too,” she recalls. That was around 1956. She got married in Salt Lake City in 1958 – then returned to New York. In all she spent seven years there.

She had to stop working for the furrier when Karen came along – the only artist out of Phyllis Horne’s six children. Karen eventually would open Horne Fine Art in Salt Lake City with husband Michael Rowley, and represent her mother along with other fine artists. The gallery is celebrating its 15th anniversary tonight, Feb. 16, during Gallery Stroll. 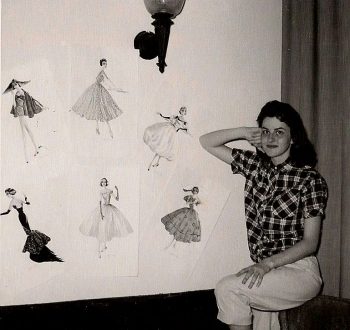 In New York with her fashion illustrations.

Phyllis Forsey Horne certainly plans to be there. She overcame a lot of obstacles to become an artist and her paintings of trees and gardens and rural Utah landscapes now hang in numerous public and private collections including the Utah State Art Collection at the Governor’s Mansion, the Salt Lake County Collection, Kennecott Copper, St. Mark’s Hospital, and the Springville Museum of Art Permanent Collection. She exhibited for several years at the Utah “Days of 47” Invitational (where 47 artists were invited to show); and was selected as “One of the Hundred Most Honored Artists of Utah” by the Cultural Olympiad Curatorial Committee in 2002.

Now 80, she has 20 grandchildren and 8 great-grandchildren “with another due in April.“ Though she and her husband divorced 20 years ago, they remain cordial. “He was a great supporter of my art, actually,” says Horne. “He helped me find places to paint. I rented a few studios to do my artwork. I had a place over Benihana for a couple of years. Howard Clark [a painter and owner of an interior design firm who also worked in real estate] let it out to artists and we had five or six in there. You just took an elevator up above the restaurant, smelled the Japanese food and painted,” she recalls. “We used to have to park at the Salt Palace and pack our stuff over there. It made you feel like you were very serious. Otherwise, I just painted at home.”

Home, for the first five years in Utah after a number of years in California, was in Bountiful, where Horne joined the Intermountain Society of Artists with Nancy Lund and Norma Forsberg. “The Watercolor Society got formed and I was a charter member of that. I signed up to take classes at the new Bountiful Art Center from Edie Roberson and some others. Tony Rasmussen was there then. George Dibble came out and taught a class for two days and it was wonderful. You certainly learned how to loosen up and simplify – even though I’m a little tight. (I used to have a more impressionistic approach but I’m quite straight-laced now.) You were so grateful when he mentioned your name in his ‘Tribune’ columns. I sure miss that. A lot of the artists do. But those days are gone, I’m afraid.” 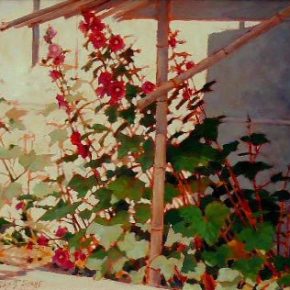 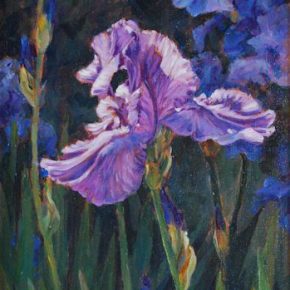 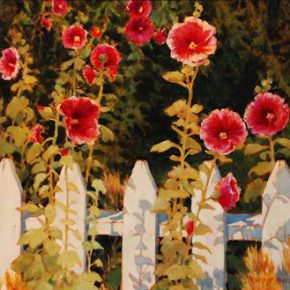 Horne had taken watercolor and oil classes at BYU, followed by some adult education classes in California, when they were stationed there in the military. “I had a lot of little things to develop my knowledge,” she says. “I even took The Famous Artists Course.” She accomplished this by sending in a ubiquitous test from the back of a magazine with a sketch of a dog that said, “Can You Draw This?” Because they moved so much due to her husband’s medical profession, she took five years to complete the 3-year course from the Famous Artists School in Westport, Conn. Founded by Albert Dorne and Norman Rockwell with faculty including Ben Shahn, Al Capp, Milt Caniff, Rube Goldberg, Ben Stahl and others, Horne recalls that “it was well-organized. They’d send you a lesson; you’d do it and send it back. I still have those lesson books. I refer to them on odds and ends. I used to take ‘Southwest Art’ magazine and I would notice now and then someone would take Famous Artists and I would say, ‘Good for you!’ It was important because I was a homemaker and studying at home.”

Karen Horne recalls that her mother’s small studio was next to the laundry room – and laundry was going all the time in that large household. Still, Phyllis made time to paint.

Horne always liked to draw and paint a bit – even had a drawing in the newspaper when she was 12 – but never took herself seriously because she was raising a family. “In New York I got information out of magazines for watercolors because I was raising two children by then – my oldest son was born there, too. At BYU I was a little naïve, I didn’t want to study art history, I wanted to PAINT. We had original art in our home growing up and I always enjoyed that but I never made the connection that I would be doing this professionally, that kind of came later.” 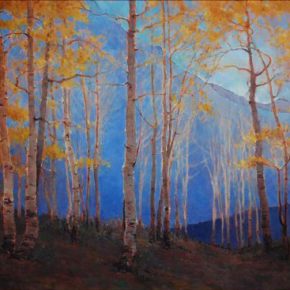 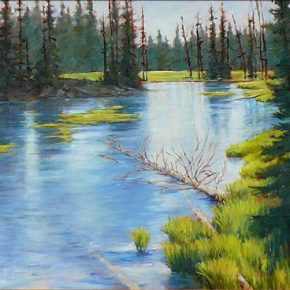 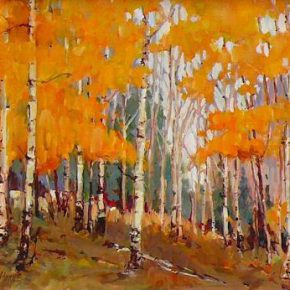 When Horne first displayed her art in the ‘70s it was a painting of some dolls that she entered into a Mother of the Year competition. She won the state and a first-place national award of a thousand dollars (and got to make another trip to New York). “My first big prize. That got me really rolling. It was not the kind of painting that wins prizes – it was sort of sentimental – but I still have it and the dolls, too. I collect dolls. And jigsaw puzzles, the hardest ones I can find. I collect Flo-Blue dinnerware from the ‘80s,” she continues. “My mother was an antique collector. Pioneer-ware. I thought she was out of her mind. And now I do the same thing,” she says with a laugh. Horne adds that art stores were always like candy stores for her with the different paints and brushes and the watercolor paper. “I don’t do watercolor anymore and I’ve got tons of watercolor paper sitting there.”

Her lone experience with acrylic was a sign she painted for her older sister’s beauty shop. Her other sister taught grade school and her brother ran the ice cream plant after her father retired. “He finally sold out – it was hard to compete with Carnation and Meadow Gold. You either had to [modernize] or part with it. So he ended up selling insurance,” says Horne.

In 1981 Dave Ericson had Phyllis Horne’s first one-person show. “I’d only shown with a group before that,” she remembers. Her career took off from there.

She “sort of” paints from photographs, something she did more often with her Nikon and telephoto lens. She doesn’t do well with digital, she says. “But being a Realist I have to get a start from something. It’s usually my own composition on the photograph, but the paintings take on a life of their own after a while and I get a totally different scene,” says Horne. “I get a lot of hollyhocks from my imagination because I’ve painted so many of them,“ she says, laughing. 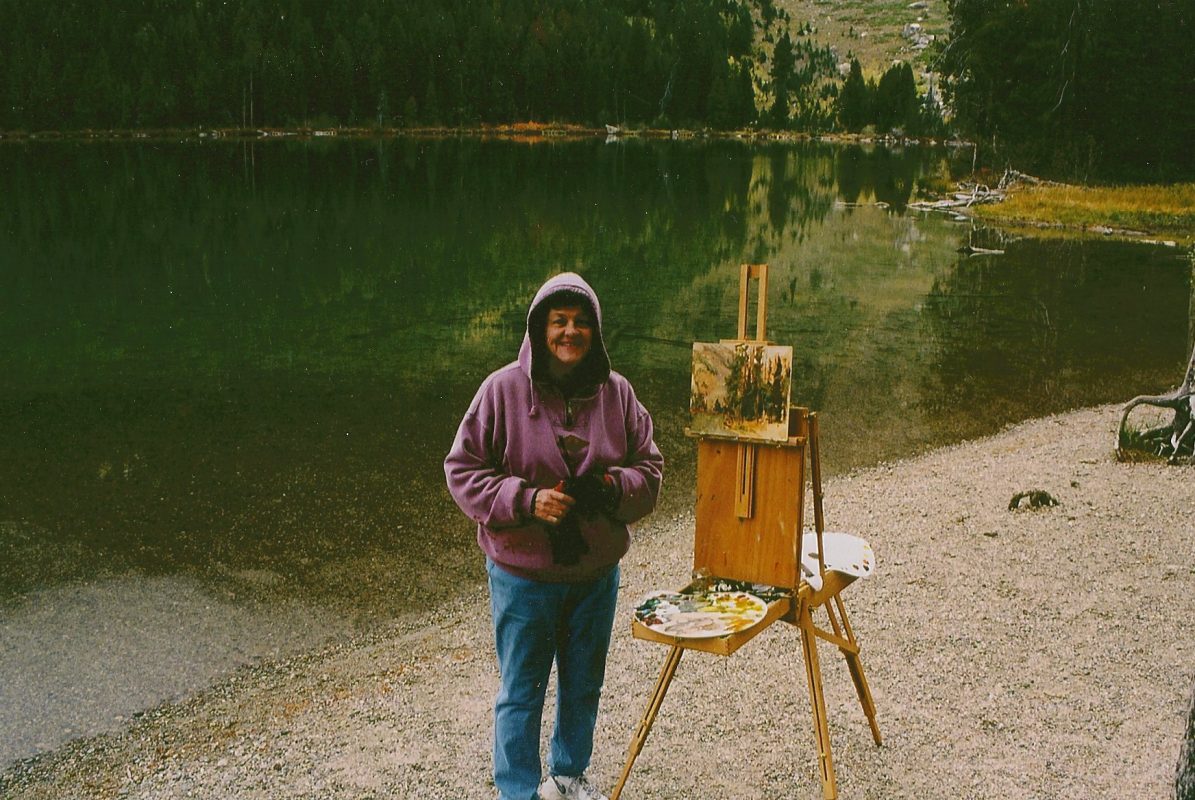 “I’ve painted outdoors, but I don’t get a finished composition that way. Sometimes I’ll develop it, but not always.” She has done quite a few paintings in Victor, Idaho, in the Jackson Hole area. “I usually work in watercolor there because it’s easy to haul around,” she says. But her primary medium, really her only medium, is oil. “So I paint a lot at home. Karen’s very cautious with masks and gloves and so forth. Me, I’m still here, but I don’t know if I’ve ruined my health or not.”

Horne doesn’t go to Watercolor Society anymore. “Because I’ve lost so many friends, some older than me and some younger. We do kind of come and go.” And she doesn’t do Facebook. “I’ve stayed away from all of it. I just don’t want to go around looking down. I’ve got to look up at the clouds. I want to see the skyline. I just have to be looking around,” she says.