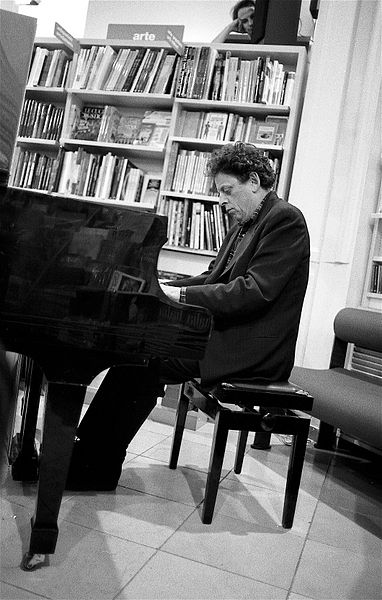 Throughout history, success has often been linked in the popular imagination with unfair choices: Alexander the Great had to choose a brief life and undying fame or a long life in unending obscurity. Talented women have usually had to choose between art and family. In our era, the choice has been money or respect. Damien Hirst has made more money that any artist ever before, but critics enjoy suggesting that he’ll need it to compensate for history’s amnesia. Perhaps no one has been treated more unfairly than Philip Glass, who turns 75 today. In spite of greater success by any practical measure than any of his contemporaries, Glass appears most often as a footnote in his fellow composer’s stories.

Philip Glass is one of a handful of remarkable composers who were born within a few short years of each other. Among the best known is Lamont Young, who was featured last week on a program broadcast on Classical 89, the BYU radio station. Young is Yin to Glass’s Yang: a composer almost no one has heard of, who has never made money on his music, but whose name is spoken in hushed or ecstatic terms by the few who know him. His insight, that most music spends its time dwelling on what has gone before, or anticipating what is to come, instead of truly inhabiting the sounds of the present moment, owes more than a little to the ‘Be Here Now’ ethos of the 60s. It’s also often cited as the cord that binds together the closest thing America has had to a major musical movement. Their music is often called Minimalism, after the contemporary New York-based plastic art movement, though absolutely no one likes or approves of the name. Glass studied at Julliard and in Paris with Natalie Boulanger, but he developed his ‘minimalist’ chops in India, where he crafted a rhythmically-based, repetitive structure that gradually shifts from chord to chord. Terry Riley also studied in India, with Pandid Pran Nath, which is kind of like having played sessions for Sun Studios with Elvis, Jerry Lee, Carl, and Johnny. But the relationship that proves the point is that between Philip Glass and Steve Reich.

When their music was happening but not yet known, these musicians formed their own groups to perform their works, pressing into service electronic organs and other rock instruments. In those days, Steve Reich played in the Philip Glass ensemble. Since then, Glass has written operas that sometimes run five or six hours and are fought over by major world opera companies. He’s written movie scores and collaborated with front rank poets, science fiction novelists, World Music figures, and Rock icons like the Grateful Dead. Steve Reich has written a piece for 18 drummers, another for six pianos, and one for a single voice on a tape loop. Guess which one gets the critics’ respect?

A few years ago, I spoke to flutist Ransom Wilson on the occasion of his performing a piece he commissioned from Steve Reich. While thanking him for adding to the world’s store of whatever one calls this stuff, I told him I thought it was the music of our time. He agreed, and then he added, ‘About damn time, too.’ With Glass, all these idiosyncratic, wonderful composers are passing through their 70s together. Music is a field where long creative lives are possible. The question remains, though: is it their creative lives that are going to waste, or ours as their audience? Anyone who has a capacity to hear new sounds and music that plays by different rules, new rules, should take time in honor of Philip Glass’s birthday to listen to some of his, and his fellow composers, music. Music you don’t care for won’t actually hurt you; music that would get inside and tell you who you are, if only you heard it, is a gift you can give yourself every day.

Phillip Glass’s recordings are readily available in commercial format but his contemporaries’ are less so. You might find some of their music at UbuWeb, a website devoted to the avant garde.