Persistence of a Lost Mural: At a Thai Restaurant on State Street

You felt your car was honorary among elephants, that you were where a Thai dignitary or king or queen would be, or, surely, had been: while an elephant mural was still there, at the restaurant on State street in Salt Lake City called Thai Siam.

Once, when it was Thai Siam, you spotted close-to-royalty: not Robert Redford, but Kurt Bestor, who now performs every winter at The Egyptian Theater in Park City at Christmas time. There with a group of male musician friends, all wild-haired and throwing their heads as they laughed. Among gold elephants in gold picture frames, not far from the painted mural-elephant as tall as a real elephant and very close to their parked cars, Bestor and friends looked as if they were at a Thai embassy’s party. You, in the–elephants-restaurant, got to accidentally be there, too.

Where the elephant mural was is now pale, flat, dust-gray paint, ending in a yard-deep black border running just above the ground. Inside, the logo is lettering soaring above a simple round black restaurant vessel, spelling Coco Wok like Radio Flyer lettering on a sled. Coco Wok’s lettering seems to be formed from/flying from steam, taking off into restaurant atmosphere.

All the indoor elephants, framed in gold (some say origin of the word “Thai” is in Thai words meaning “gold”) and the dreamy young muralized elephant, outdoors, on the south side of the building, are gone, replaced, inside and out, as if by a pale boucle Coco Chanel suit, bordered on all its edges by somber strips of black.

Coco Chanel in mourning? How could they banish the giant elephant, paint over it, take away the framed golden indoor elephants-repeated-artwork? Other things of beauty did survive, are still there with the new owner: graceful earthy-metal Thai figurines, each a foot tall, set in window bays, like mediators or guardians, separating you from the view of parked cars in parking lot. An ornate dark  wooden hostess-stand is still opposite its front door. But when the hostess asks how many of you in her kindly voice you still want to say what a child would ask: where are the elephants?

As if in a jewel heist they were stolen, you think. How dare they? Has the new restaurant banished, put an end, to beautiful food, too? 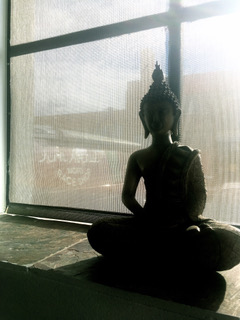 A metal sculpture piece in the window of Coco Wok, photo by Rebecca Pyle

You go to find out. On a cold night you and your companions, one human and many ghosts of original Thai Siam, ghosts of elephants-past, order soups, curries, and one serving of Thai tea. No dessert: grief’s too great. Grief’s unsweet. And what do ghost-elephants want?

The soups’ and curries’ tomatoes, onions, carrots are large, vivid, hand-cut: chunks of pale chicken are different in size, and many. Their broths outdo the word piquant. Have shut-in months of the pandemic, attendant anxiety and loss, loss of the elephant murals and artwork, here, made you too grateful, astounded, about/by, this delicious food? This is better, here, than you have ever tasted, or, at the very least, as-very-good. (Even the ghost-elephants you’ve brought with you, in your head, might be happy to know this is true; elephants never forget, they say. And, loyal to place and memory, always can/will find their way home.)

Square-sided, white, plain, ceramic bowls make colors of curry and soup and red rice even more brilliant. But you only began to be sure it might possibly be a fine place (despite the mural’s, elephants’ banishment) — when well before the soup and curry arrive what you thought would be one serving of tea arrives. Not in one small cup, but in a large teapot, decorated with one fantastic beast, each side. One grimacing, head-down blue dragon is fired into the white glaze on one side; you turn the pot aand see one more blue creature, simultaneously fish and fowl (with scales, but also a beak, looking part-rooster, part fancy fish), sinuous on the other side. 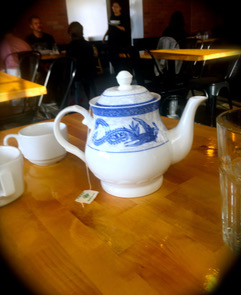 More cups? asks your server. She brings another, so the teapot can be shared.

The elephant of the mural is unrecoverable, under obscuring pale-gray paint. That parking lot has lost its magic, once beside that nimble painted elephant stepping east, but swiveling its head west, toward State street, toward the restaurant door. Surrounded by blue sky and white clouds, the elephant also, as if part of a vast handwoven carpet, was surrounded by one giant gold circular medallion; repeating intricate blue medallions advanced across the rest of the elephant-side of the building. Below elephant’s front feet was one spilling flood of golden tendrils suggesting the elephant perennially re-crossed fast-moving rivers, played in Indian Ocean’s waves. The Thai Siam mural-wall sang out pleasing, soothing, primary colors: dark blue-gray elephant against dark-red wall, bright blue and dull gold medallions. A handwoven carpet, created by an artist and paint, to love.

But you might forgive, because these foods, dark gold vegetable rolls tucked beside them, small rounded hills of red rice tucked beside them too, and a decorated teapot of blue and white, bring you back again, to a faraway party, the same one that suddenly-head-turned-elephant, outdoors, was once inviting you toward, indoors, with a sharp turn of its head.

A good mural, vanished, still has a ghost. Which brings you back.

Three Thai restaurants in succession occupied this building, before it became Coco Wok; perhaps the previous owners, or the landlord, dressed this building in its neat dull suit to make it quickly easy to quickly pass on to another, possibly unknown, set of restauranteurs. But so great is your grief three days pass since you were daring to park beside the building and go inside; when you realize that commerce can be a cold and cornering friend, for a business or an artist. Perhaps former or current owners felt they had no choice but a blanker slate?

Perhaps a great mural, artwork, when it’s loved, might imprint itself more than you will ever know, upon your soul: only if it’s gone, unrecoverable, do you begin to know?