Performance in a Digital World: Everything Tendentious or M in Luck at the City Library 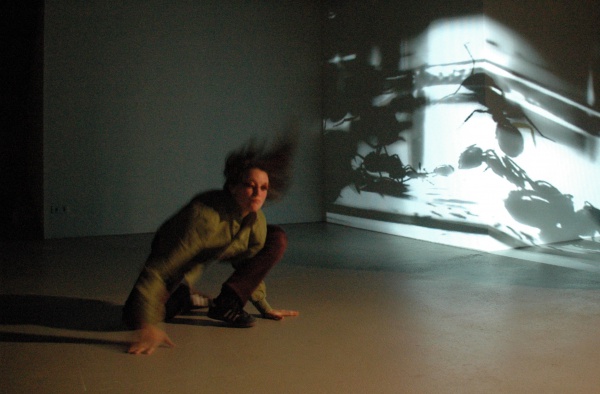 Everything Tendentious or M in Luck was presented in a suite at the downtown City Library this past weekend.  The inter-disciplinary performance by German artistic director Michael Schmidt featured two artists living and working in Germany alongside locals Analeigh Sanderson, Joshua Yago Mora and Tanja London (who helped bring Schmidt to Salt Lake City). It was refreshing to walk into a show not knowing what to expect; congratulations to Tanja London for bringing a different aesthetic and sensibility to Salt Lake.

The space was intimate with audience members sitting closely on a raised platform of real green grass (a stark juxtaposition to the explored cyber-world) or standing in the perimeter or the room.  The content is focused and developed, examining themes of technology, bodies, and human connection or lack thereof.  These are themes that many artists have been exploring lately and this particular exploration goes between actual lectures and embodied movement, exploring topics ranging from the Industrial Revolution to the vastness of Facebook and cybernetics.

While I am not sure I feel the urgency to join a revolution against technology, partly because humanity has always been pretty awful with or without the aid of computers, this show was powerful. It was strongest when the human body moved with and against themes of connection and disconnection, sweat appearing on shirts and faces as a reminder of our humanness, our flesh and blood.  However, the inclusion of text was also engaging and organic with carefully choreographed transitions serving to either dispel or create tension. An ambient video design by Scott Wasilewski reminded us of our digital age, and often was projected on the dancer’s forms, imprinting their bodies with the familiar glow of florescent light.

Ten or so exercise balls were used to offer visualization of our relationship with technology, concealing the dancers in the beginning and undeniably supporting Lena Visser while she danced and spoke of revolting against the industrial revolution, and ultimately trapping the dancers, their entire bodies hidden as their arms barely outstretched.  All performers were skilled both theatrically and physically, and blended the two back and forth throughout the show.

The show climaxed with the four women frantically moving their bodies, twisting and falling and contorting, unable to escape the bodies that we are given despite the technology we have invented.  The feeling in the room at the conclusion of the show was electric, the small audience clapping for several minutes, all of us alive in our skin while our phones and computers waited for us at home.