“Mother and Child” by Paul Nielson

The history of the beginning of modern art is often told in terms of a reaction to and discarding of the longstanding tradition of the Academy. The art academy has its roots in sixteenth-century France, coming on the heels of the artistic accomplishments of the Renaissance. Many artists studied the works of Raphael, Michelangelo, Bellini, Titian and others, and also focused much of their attention on the art of Classical Greece. Before the rise of modernism, this tradition of study was the dominant force in Western art for well over three hundred years. Today, the tradition of the academy still exists, though outside the contemporary “art school.” Artists continue to study those of the past in figural drawing, perspective, composition, narrative and other aspects of correctly rendering naturalism and the Classical tradition.

One artist in whom this tradition is still very much alive is Provo-based artist Paul Nielson. Studying privately with his master (in the traditional sense of the word), famed artist Patrick Devonas, after graduating from the fine art program at Brigham Young University, Nielson has gravitated toward a study of the Classical. Neilson’s interest was ignited with the figural drawing courses offered at BYU, and after exploring other genres, he began an intensive study based upon the tradition of the Academy (first at Carl Bloch Academy in Springville) and the tradition of the Classical.

The term Classical Art generates many connotations — motivation to correct rendering of the figure, naturalism — and thrives in many cities, such as New York, Los Angeles, and the pinnacle of study at Florence, Italy. The tradition has evolved from artists such as Raphael and Titian, to Le Brun (the first president of the French Academy of Art), Poussin, Boucher, Fragonard, David, and Bouguereau till the present day. At one time, any young artist who wished for success was expected to study at an academy, many of which flourished throughout Europe.

Following this tradition, Nielson dedicates himself to his craft, painting with intensity and excruciating detail. The lengthy process by which he arrives at a finished work is no less excruciating: figural drawing from life, clay models, preliminary sketches, contriving an actual staging of the clay figures to render his astoundingly accurate compositions correctly.

Yet as post-modernity allows, Nielson takes his classical training as a basis, while contriving images that he terms “Classical Symbolist,” as other contemporaneous artists have done. An image such as Théodore Géricault’s “Raft of Medusa” may serve as an early example of the concept behind this term. The raft, having survived a shipwreck lingers upon a stormy sea; some figures are dead, some alive, yet a small detail of a boat in the distance promises hope, salvation and liberty — many of the connotations of French ideology in the stormy 19th century. The painting is magnificently rendered, with symbolism and a degree of the Romantic sublime.

To this masterpiece might be compared Nielson’s “Philios.” It also is classically rendered in great detail, yet there are aspects of Romanticism in Nielson’s motivation- again, hope and optimism in this world, for the past, for the future and primarily the present in figures which he terms mystical. This height of humanity in Nielson’s work is reflected in these figures that are, like his manner, “classical” — timeless. The composition is excellent, with the utmost exactitude in proportioning. However it is the figural aspect that gives the picture the element of the sublime. They faceless figures are shrouded in cloaks, and connotate aspects of the past, present or future. Nielson replicates these figures in many of his paintings — a forest, a deserted plane, a sea shore — and they stand tall and seem to guard the gates of the hope of humankind. His paintings display an inner pathos, a main directive for the Greeks, a pathos seldom seen in contemporary painting. 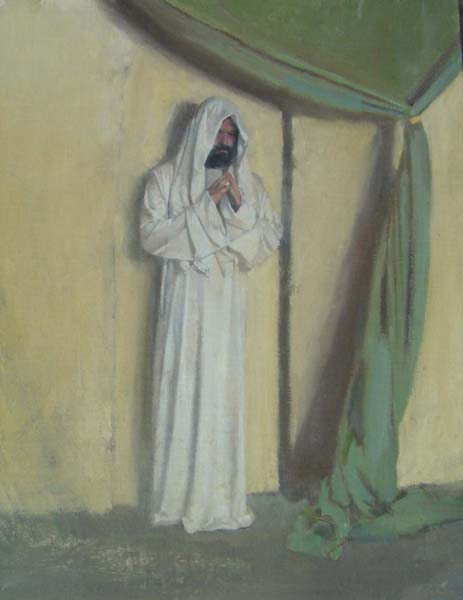 As Nielson paints with such intensity, his works are equally intense. The artist usually may be found in his Provo studio, working on life studies, preliminary sketches, preparing his clay models and painting his works. Often his wife must interrupt him during his work to eat and he sleeps very little. His art, according to him, is a passion equally powerful as other aspects of his life and he forgoes any superfluous activities for the sake of his work.

Nielson’s paintings are a testament to the continuation of fine painting in the traditional sense, yet have the technique, the content and meaning that many representational artists of today do not have. Nielson’s works are bold, masterfully articulated, unique, and above all meaningful in their sublimity. The pathos that one feels in his paintings incites emotion as powerful as the manner in which Nielson renders his canvases. For a showing of the artist’s work you may contact him at: paulnielson99@hotmail.com