These beings arrived as strangers – and then it began – they became less strange.

For nearly two decades, Ogden-based artist and international photographer Paul Butler has directed the annual “Wendover Project,” which on Sept. 12 is expected to draw more than 100 women. Most, at first, will be strangers. The majority will stand nude and barefoot on private property in the hot sun while being artistically body painted by the other women in a design created by Butler. They then will pose as a group for his camera, followed by cool showers in a nearby hotel. Make no mistake: It’s a long, often miserable day – tired legs, sore feet. But more women are welcome to contact Butler and take part, as painters or posers. He says the project offers great discussions, new friends, self awareness and freedom.  “Often tears and hugs come my way for the positive experience,” Butler states.

He got the notion for the Wendover Project some 18 years ago while drawing figures in the studio and “discovering how common it was for women to ‘hate’ things about their bodies,” Butler recalls. He found it painful to see them feeling inadequate or insecure “considering how temporary we all are.” (He finds that men, whom he also sketches and photographs, are significantly less body-conscious.)

Butler knows all women are beautiful, despite age, weight, color, ability, stretch marks, an off-kilter nose, or any other misperceived “difference” or “imperfection.” And if that is the message, the human body then actually becomes his medium. “At Wendover, there are no good or bad shapes,” he says, “just human shapes, alive and celebrated.” 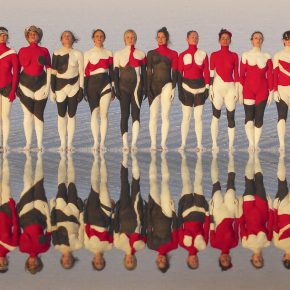 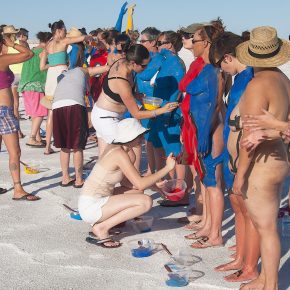 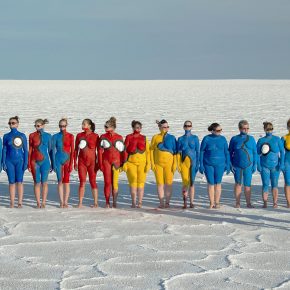 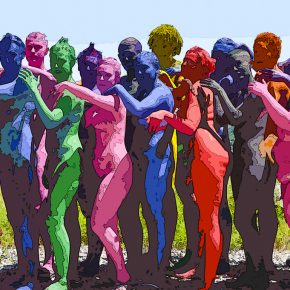 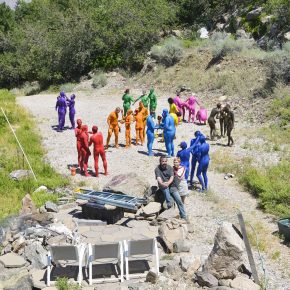 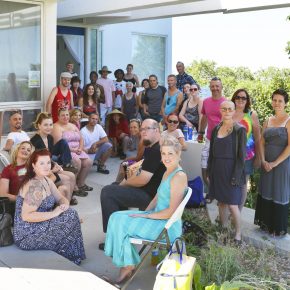 Butler tends to be very good at whatever artistic pursuit he follows. A student of famed USU educator and landscape painter Harrison Groutage (who died in 2013 at age 87), he learned his lessons well. One of Grout’s favorites, he lived with the family for a time so he could afford to stay in school and remained close friends with the artist for 40 years; daughter Hilary Groutage still considers him a big brother. He also studied art at California State University at Long Beach.

A Sterling Scholar, he began winning professional art awards at 17; took up photography seriously at 18 and went on to do the usual: oil, watercolor, pastel, charcoal and sculpture. He then evolved into another area essential to the Wendover Project: design. Furniture, costumes, houses (including his own impressive studio in the Ogden foothills, an ongoing project he started in the ‘80s).

“I see art as admiring and enjoying the beauty around us. I love selling stuff, but don’t think of art as a product,” he says. He does photography worldwide, a lot of oil and charcoal in the studio, and reserves a room for body painting, or as he terms it, “composition on multiple bodies,” which he photographs and often posts online. Butler spent three days in “Facebook jail” in July (for those of you who have never overstepped, that means you can’t post or use FB Messenger for a specified period of time.) He had skipped the body paint that time. 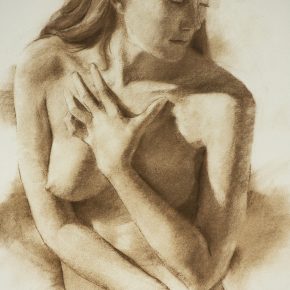 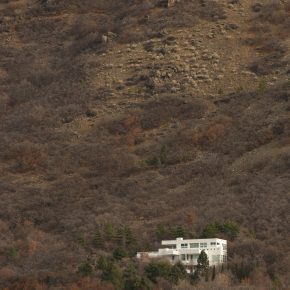 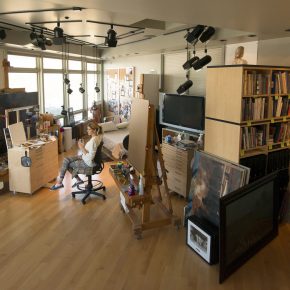 For the Wendover Project, Butler uses “bright, exciting colors” and organic shapes in the design, taking cues from human bodies. The project to him is first art, then design. The photography, he says, is merely documentation: “It’s only the avenue to get me back to the studio where I can continue the art.”  We live in an age, he explains, “where we actually can discover the art many times again on the computer. So when I first design it, I think about that, about later changing the colors, textures, edges.” For his first Wendover Project shoot he had just a single model and used “white stripes to make parts of her body disappear against the white salt,” he recalls.

And how do his models feel about the experience? The women we spoke with agree that it is liberating and both say they plan to return so long as the project continues.

This will be Jen Robel’s third year in Wendover. She first heard about it from a friend; they teamed up to go together and have continued to attend. “I agreed to do it because it sounded like an enlightening experience,” says Robel. She explains, too, that she once suffered from eating disorders and body issues and felt it would be a good opportunity to “for once, be comfortable in my own skin. I was not wrong. Once you get out there and on the flats without your clothes on you’re no longer just a sexualized body. You’re just a person,” she says. “Afterward I had a newfound confidence that I never knew I had, not to mention I had also made a ton of new friends.”

A year ago, Macie Hamblin signed up to be a painter. “I was too chicken to be a model,” she remembers. But she went to Butler’s studio and worked with a smaller group “and it was just so fun that this year I have to be one of the models.” She is bringing two women with her who never have been part of the project. “It’s just intriguing to be with a group of women with different body types,” she says.

Hamblin at one time was scared of being naked in front of other people, “even by myself, I used to avoid mirrors. You just get closer to yourself with this. I learned that all shapes and sizes are really beautiful, that I’m really beautiful. In today’s society it’s not OK to be different. Here, you don’t have to lose weight to be celebrated,” she observes. “I feel like a work of art. Well, I am a work of art and Paul makes us realize that. 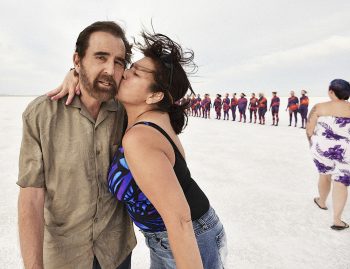 “I’m so grateful that this exists,” Hamblin says.

The 18th Annual Wendover Project is being held in an undisclosed location on Sept.12, 2015. Female models and painters are still wanted and information is available at https://www.facebook.com/paulbutlerusa. Carpooling is encouraged and signups also are available there.

UPDATE: It was a record turnout for the 2015 Wendover Project: 130 women participated. Most of the 95 who modeled were new to Paul Butler’s camera, but few (if any) were shy. Butler says it was a perfect day with soft light and filtered sun, but that when the picture plane becomes such a long horizontal, with very little vertical, “it’s a unique challenge. The design considerations are limited to variations along the horizontal.” He adds, with a laugh, that his camera with a telephoto lens was so far from the models, “I had to use smoke signals from one assistant to the next to change poses.”