Pamela Beach’s Portraits of the Heart and Mind 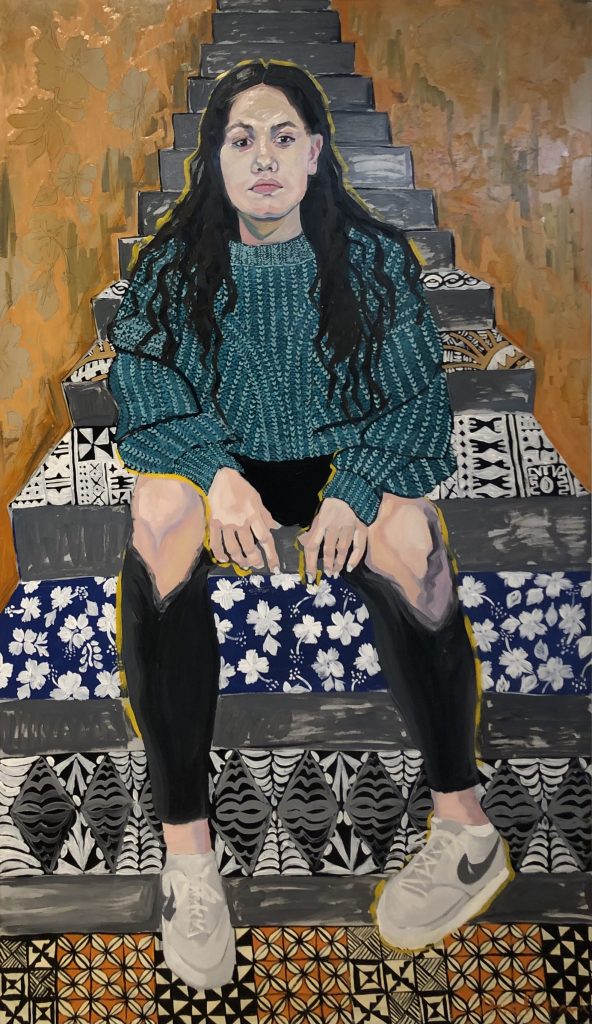 To approach the figure portraits of Pamela Beach, on view in the main gallery at Bountiful Davis Art Center until September 10, you must pass a crowded assortment of colorful and often familiar-looking objects drawn from the era of Pop art, which can distract and detain the casual visitor. But don’t let them. Pop art has been around for years. It can wait a little longer.

Trust me. Curator Todd Marshall’s motley pleasures will take novice and old hand alike far beyond the soup cans and celebrities, towards a deeper appreciation for the Art of the Sixties. But Pop, with its wealthy consumer toys and reincarnated white masculine point of view, can hardly avoid ticking off — not shocking, but boring — today’s audience. By comparison, as I approached the gallery corner devoted to Pam Beach, one name leapt to my mind: that name was Alice Neel.

Neel was surely postwar America’s greatest portrait painter. She was so radically original that her contemporary artists and the critics of her day stopped talking about portraits in order not to have to admit her to the conversation. And while she has yet to recover the recognition she deserves, artists like Beach have absorbed her diffused example, whether they know her specifically or not, and are showing the way forward for those who want today’s identity-driven, gender-aware, ethnically unbiased perspective on social justice to be part and parcel of their world. It’s an art that isn’t just narrative, but foregrounds the domestic drama of actual life: the real lives that most of us live. 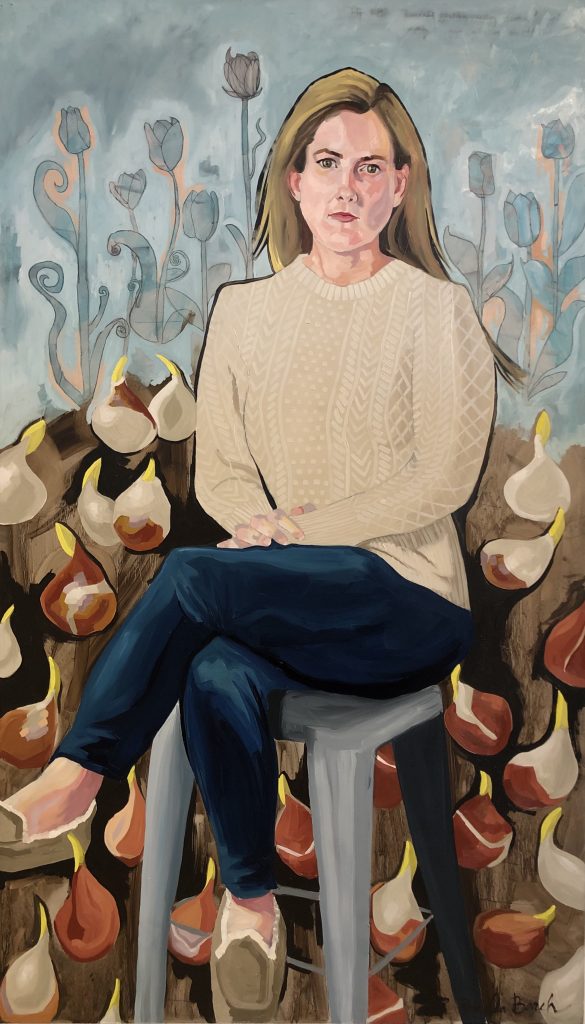 There are 14 of Pamela Beach’s seemingly life-sized figure portraits at BDAC, and any one of them could serve to show how these life studies combine individual experience with a knack for artistic invention. ‘Tucked in the Cold,” for example, presents the aftermath of a divorce that the subject came away from with a new understanding: a realization that her former self-image as a compassionate person seriously lacked sufficient knowledge of just how much potential pain and suffering there is. We know that because after Beach was done painting it from life, the artist and her subject spoke by phone about their shared experience, a conversation the artist memorialized with a pencil notation jotted on the only handy place: the corner of the portrait, where it can still be seen and read, thus admitting the viewer to their shared intimacy.

Their conversation during and after posing is not the only place where Beach opened up her process. Having apprenticed in the context of too many stories about remote artists, whose children grew up neglected, abused, and alienated from their parents, she was determined to make certain that her six children experienced art and art-making as a healthy part of family life. What’s “Tucked in the Cold” are tulip bulbs, seen in the lower part of the painting, that the work’s subject, a gardener, meditates on through the winter. Both metaphorical and real, they are what she describes as an “exercise in hope.” So much for the adults; the tulips in the misty background were added by the artist’s children, whom she allows to contribute to her work. Sometimes, she admits, she feels she must paint over their efforts, but in this case they added a successful and conclusive dimension to the portrait. 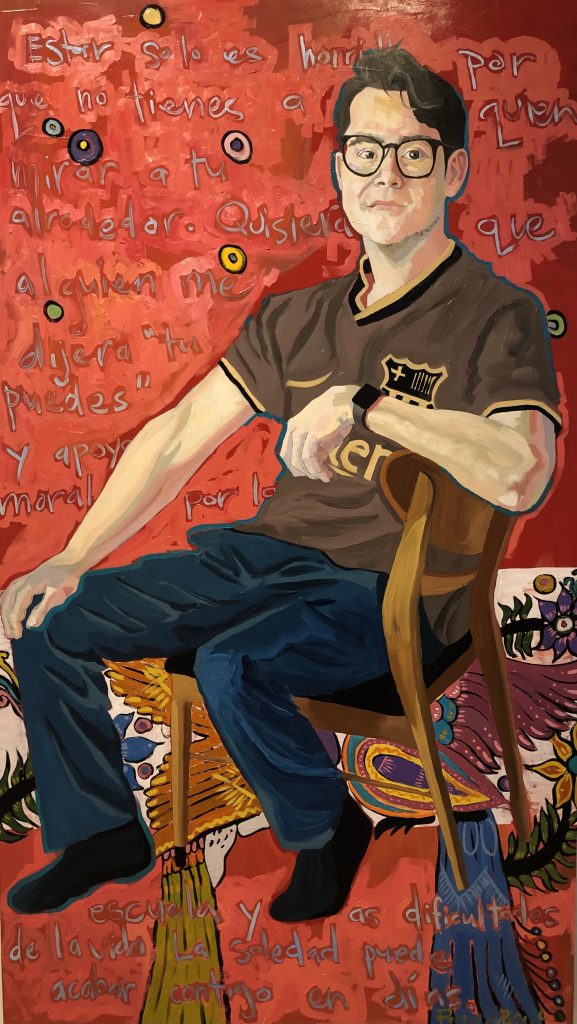 There will be some who object to taking such liberties with the traditionally defined boundaries of artistic responsibility, who would accuse her of misleading her viewers and confounding their expectations. When Renoir painted a boating party modeled for entirely by his friends, they became anonymous types, to be identified only later, by scholars. Beach, however, makes sure the universal types she depicts — the alienated, the lost, the unloved, but also the self-asserting, those who feel they are making progress, and the triumphant — retain their individual identities, which if anything she enhances. “My work is about connection, respect for story, and dignity of each individual,” she writes in the pamphlet that accompanies You/Me/Us, through which she shares the things that subjects have shared with her about themselves.

Some may wonder why an artist would give away such secrets, acquired in confidence to bolster her painted revelations. It would seem that she distinguishes the visual truths she has learned to discern and reveal with her brush from the stories she is told by her subjects. The former are part of her craft, they belong to her, while the latter do not. They belong to her subjects, or are the common property of humanity. “I offer the world art that shows reverence and respect for human experience,” she says, adding, “I seek expression of that in life which is only felt. What goes on in the heart and mind is where the real transformations in life take place, and therein lies the place that I strive to give visual representations to, through my paintings.” 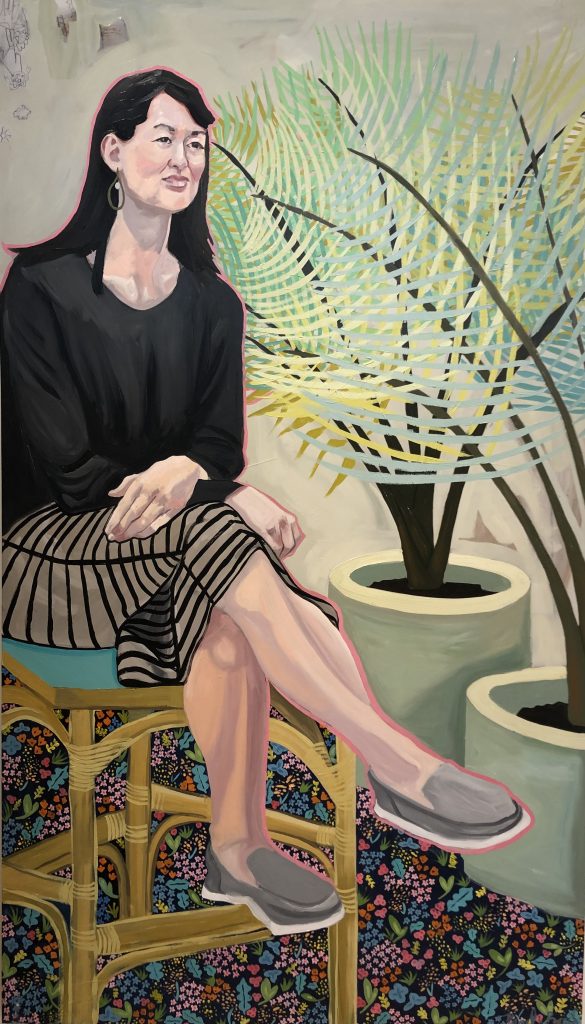 Like Alice Neel, who also distinguished herself by choosing her subjects from family, friends, her creative peers (among her male portraits is a nude figure of one of my first editors), and not from the famous, the powerful, or simply those who can pay, Beach chooses subjects one might spot on TRAX, or encounter at a BDAC opening. “I offer the world art that shows reverence and respect for human experience.”

It remains to comment on how she does this. There are a variety of personal touches evident in these portraits, which will reward time spent in closely observing them. For a comparative example, Neel painted figures in a traditional manner, using perspective and shading to capture their rounded bodies set realistically in domestic settings. Beach agrees with her on the subjects, but renders them in a contemporary manner. In her figures, relatively flat depictions of clothes and surroundings are stitched together to gently prevent viewers from forgetting that these are her versions of what they might see, and unlike photographs, which might be mistaken for objective truths. In “Sticks and Stones” — the title refers to the subject’s response to racist insults — the figure floats in front of a vertical-looking, stone pattern ground and a thin screen of trees. Generally, the figure is then set apart from the background by an outline — red, in this case — that inserts a third dimension and makes them stand out from their environments. In addition to the lively energy of the faces and bodies, it’s another way that Pamela Beach reminds us that these individuals are more than what may surround them. That, and her knack for bringing her portrait subjects to life, places her at the forefront of today’s visual artists. 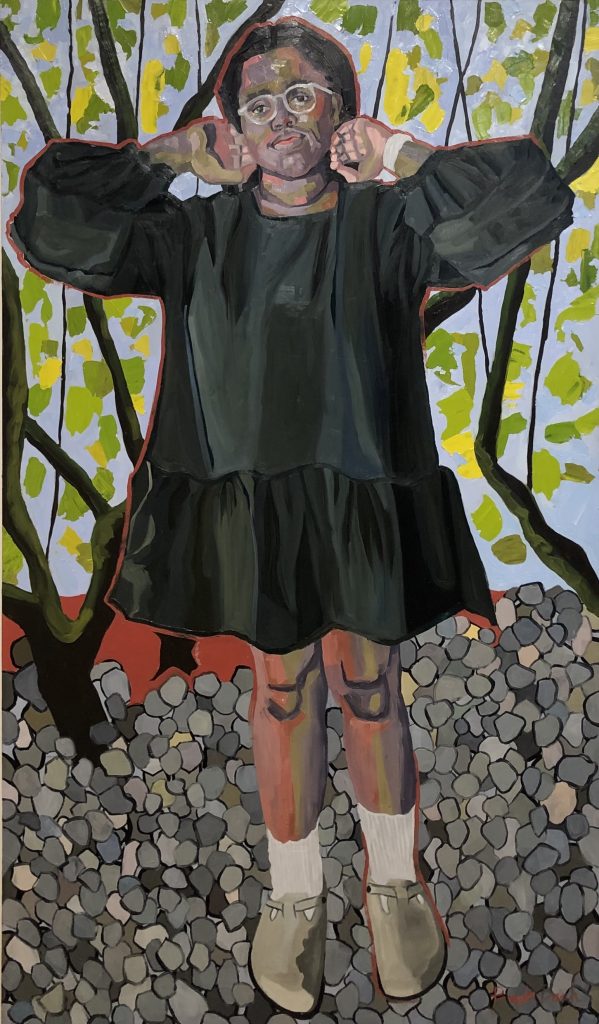