Kevin Red Star’s paintings at Modern West Fine Art give the immediate impression of no-nonsense stability and strength. Their compositions—featuring mounted Crow warriors, tipis against starry skies, or profiles of chiefs in traditional costume—are balanced and deliberate. Most shapes are fully delineated. The predominant colors are subtle, earthy tones, which make the canvas look in places like soft, tanned leather. Patches of red, yellow, or blue pigment are bold, but measured and deliberate in application. The paintings betray a methodical precision that only the most experienced artists can create. However, you will have to look closer to begin to understand Red Star’s clever, dreamlike take on traditions of mark-making and representations that blur how we separate subjects and symbols.

Red Star was born on a Crow Indian reservation in Montana and began his career at the San Franscisco Art Institute. He paints things that are painted—he represents objects that have been marked with pigment in a world alive in his canvases. He depicts a painted shield or a painted face or a painted tipi. Some of the dwellings and tools look weathered, as if they had been made and marked long before Red Star got around to featuring them in the center of his canvases.

He sets up a layering of time and agency—who painted these small painted objects and when? It’s an absurd thing to wonder until you stop to think about the works’ internal logic. What is he getting at by cleverly undermining his own singular authority as the artist?

The shapes and colors of the figures he paints in definite narrative scenes, like the eight riding warriors in“Hunting Party,”echo his representation of the painted symbols on objects, like the three horses in the middle of “Three Horse Shield.” Nowhere is this dynamic more apparent than in works like “Good Horse’s Tipi” or “White Bison Tipi.” You can’t be sure whether the horses on“Good Horse’s Tipi” are firmly fixed to the dwelling’s material, or if they are about to run off into the field or sky at the edges of the tipi flap. The way that Red Star describes the tipi shape, which is simple to the point of abstracting into a crisscrossing of lines and shifting colors, is essential in making the viewer doubt what is the painting’s subject or symbol marked onto that subject. Blurring these definitions demonstrates their fluidity.

In Red Star’s work, he documents traditions of mark-making and its vitality in Crow cultural heritage—from painting on faces to painting on tipis. In his work as an artist, he simultaneously perpetuates that process by creating his own contemporary paintings. 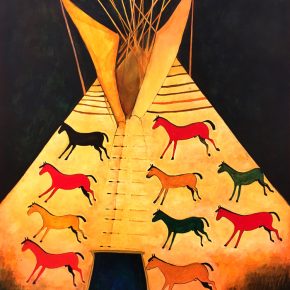 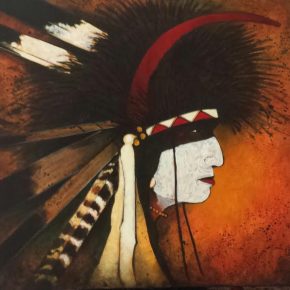