Painted Faces: Bierstadt to Warhol at the UMFA 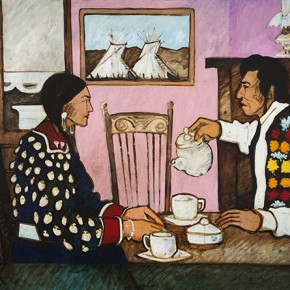 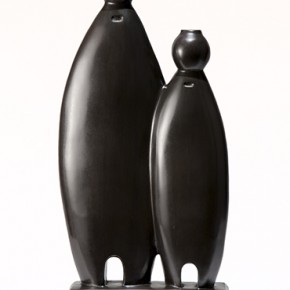 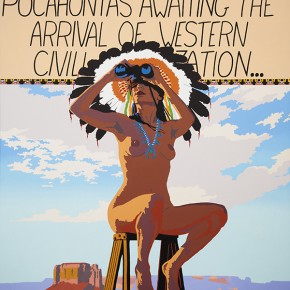 Individual works in Bierstadt to Warhol: American Indians in the West at the Utah Museum of Fine Arts (UMFA) may include western scenery, desert skies, colorful iconography, ethnic clothing and possessions, horses, and assorted mythic activities, alone or in various combinations. Some contain none of these. But the one thing they all have in common is faces. Proud, stern, rugged, full of weather-carved character or mysterious, even inscrutable, these noble visages return our alienating gazes, search the horizon for things we never see, or just go about tasks as mundane to them as they are mysterious or evocative to us. Only a few–perhaps as few as three–withhold their faces from view, and they do so to make a point. Two sculpted women, covered from head to foot in flowing garments that might swaddle Muslim women, balance pots of water on their heads. In effect, the pots become their heads, making an uncertain point about their identification with this humble task. Two figures riding in the back of a pickup truck are wrapped so tightly in their blankets they lose all identifying characteristics, becoming mere cargo. And in the one shocking image here, a naked maiden’s binoculars and bandana-blindfold render her anonymous while empowering her with something like the sense of threat the pioneers must have felt whenever they encountered her free-ranging ancestors.

There are no early self-portraits of native Americans here, though such images do exist and can be seen in museums in Los Angeles, Tucson, and elsewhere: museums more interested in ethnography than art, perhaps. For the first century of this chronological display, the Indians are the objects of artistic concerns they don’t share. Later in the 20th century, perhaps in response to pervasive depictions in moving pictures, indigenous artists with various motivations begin to paint and sculpt their self-images. Here the collection takes a rhetorical position for the first time, ignoring artists who only seek to reinvigorate their own tribal artistic tradition, focusing instead on those who deliberately challenge convention and cliché in order to assert their own identities. In the third era, Pop artists add irony to the mix, using deliberately heavy-handed visuals to foreground the sentimentality of the earlier mainstream depiction, even as they decline appropriately to try to correct whatever distortions those sympathetic, but questionable, outsiders brought about.

Bierstadt to Warhol: American Indians in the West includes multiple canvases by each of several artists. This gives viewers a chance to explore not only the subject matter, but the range of skills, techniques, and purposes each artist brought. The collection is viewer friendly, with nothing technically challenging to get in the way of enjoying its contents. The names of unfamiliar artists will give those who want to follow up some good places to start looking. As always, UMFA staff have done a sensitive job of grouping works helpfully, without crowding. The signs suggest useful ways into each work, and if they are universally straightforward and ignore the controversies swirling around this art—as they do about so many cultural boundary issues these days—the opportunity to see the work through ones own eyes is both a valid and pleasurable option.

Bierstadt to Warhol: American Indians in the West is at the Utah Museum of Fine Arts through August 11, 2013. Kevin Red Star, an artist featured in the exhibit, will give a free public talk at 4:30 p.m. Thursday, April 18. Red Star, born and raised on the Crow Indian Reservation in Lodge Grass, Montana, will discuss his development as an artist and the themes in his work.