Paige Anderson’s paintings are a trip into high order. All is arranged, undone, arranged again. In “A Map of Salt and Stars” and “Heavens Clothed in Earthly Vestments” pointed star-shapes repeat very, very methodically, but with squinting shimmer-gleam, like the modulated light emanating from a crop of night stars. (Blame the limited structure of our eyes, blame also even the Hubble telescope’s structural limitations, for what seem like many angling points on stars: distant stars, of course, are really only round.)

These paintings remind us our dreams and hopes hover like an ever-changing aurora borealis, over everything practical in our lives. Looking up at stars, even briefly, we forget the practical; we think of what is faraway, hoped-for. (Like parents’ dreams when a child is born: the diaphanous dreams of possibility, luck, sustain us through realities.) 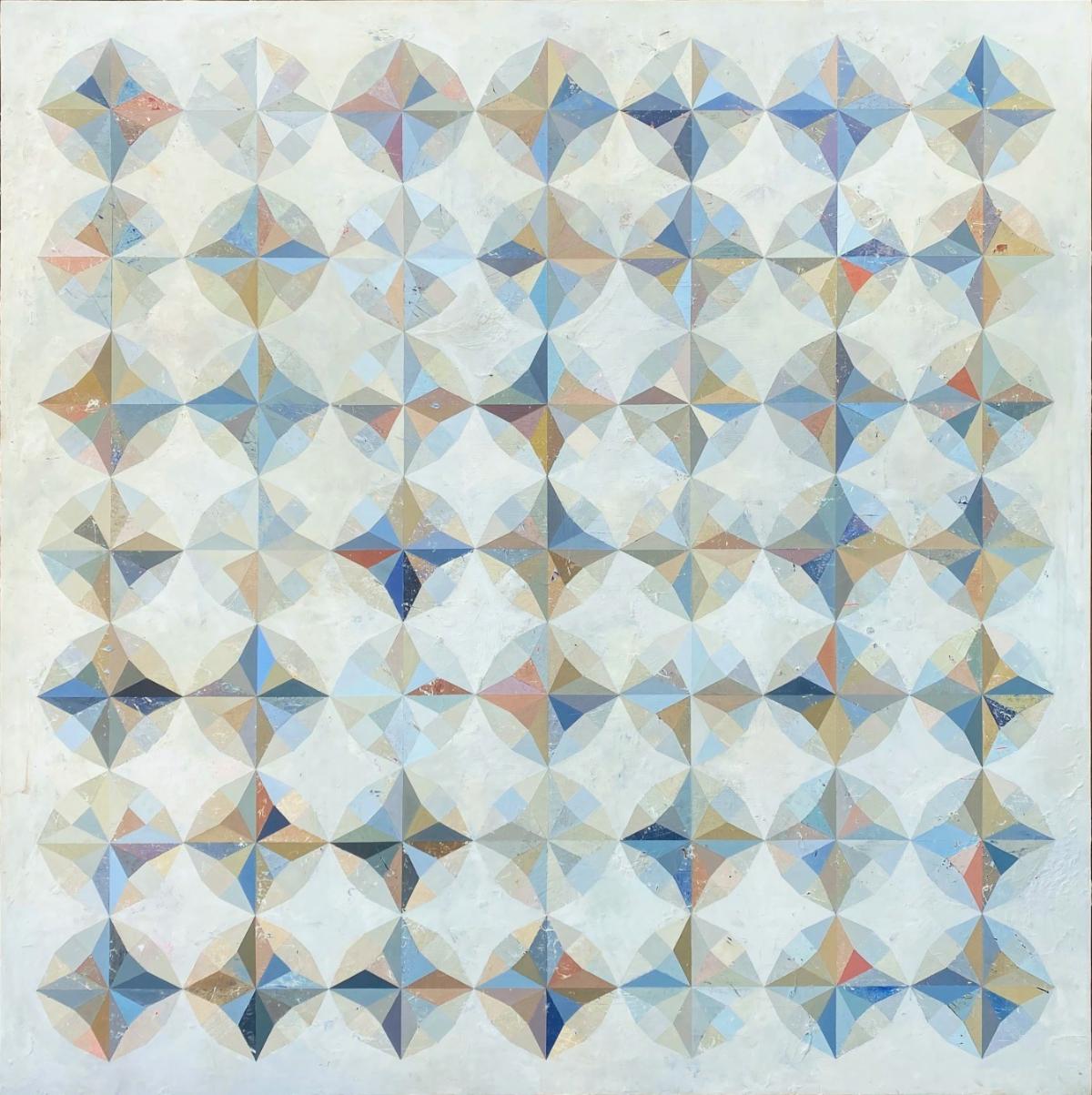 Given a chance to know exactly how Anderson layer-paints these oils on canvas, with what control, with numerous redos, even sanding away surface layers of paint and starting again – you might say no, thank you; suspecting, correctly, that it is not only by recipe, that only the intent artist could intuitively persevere through multiple additions and subtractions. (Josef Albers, the artist/color theorist, was similarly addicted: he filled small perfect squares with color, until the color spectrum was near-exhausted.)

As if lit by fireflies, Anderson’s “Once More We See Stars,” with its classic quilt pattern of red, mighty, out-branching, out-linking stars seems to travel simultaneously into past and future. Where it’s reduced, by sanding, to purest, blankest white, we know we’re back at an old quilt’s beginning, to its inner, pristine, layer of white cotton – back at quilt’s birth-pangs, the year of its formation. Or, to a real quilt’s end: when an owner of a real quilt might decide that, because its design and colors are so worn away, time has come for its end. 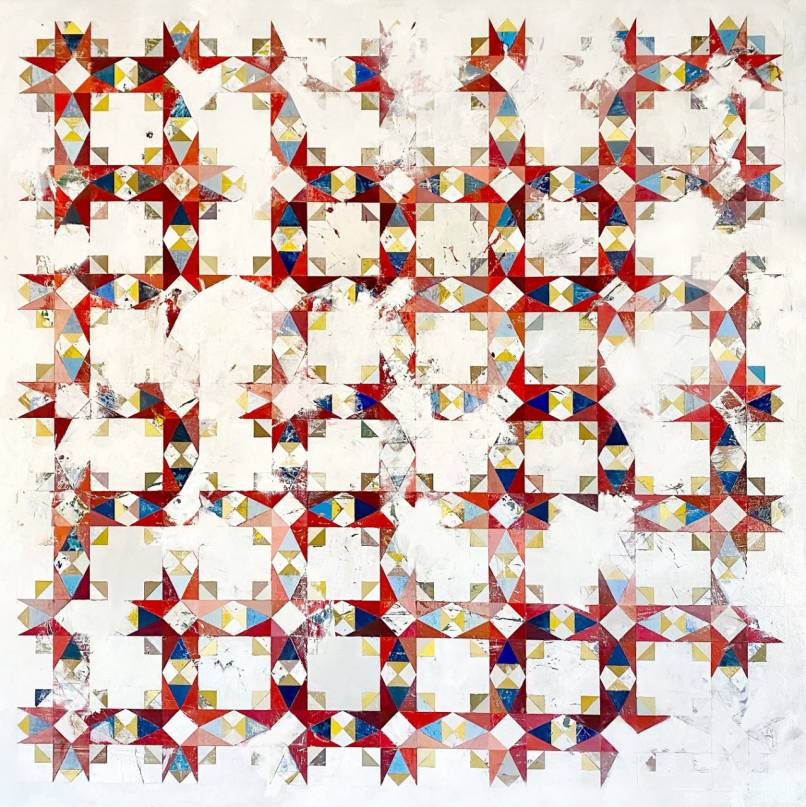 There is an abacus determination in these many paintings; the precision of a farmer planting crops. Mostly, Anderson is fond of cool tones: an ameliorating jade green appears often, but, most of all, a Cinderella-ballgown blue reappears, exhaling a superior frost.

These paintings almost seem too fine-spun for this world. But Anderson has granted hot stars a keeping place, an orderly jam-jar reprieve: here, on earth, in her work, starlight finds a glade of coolness. 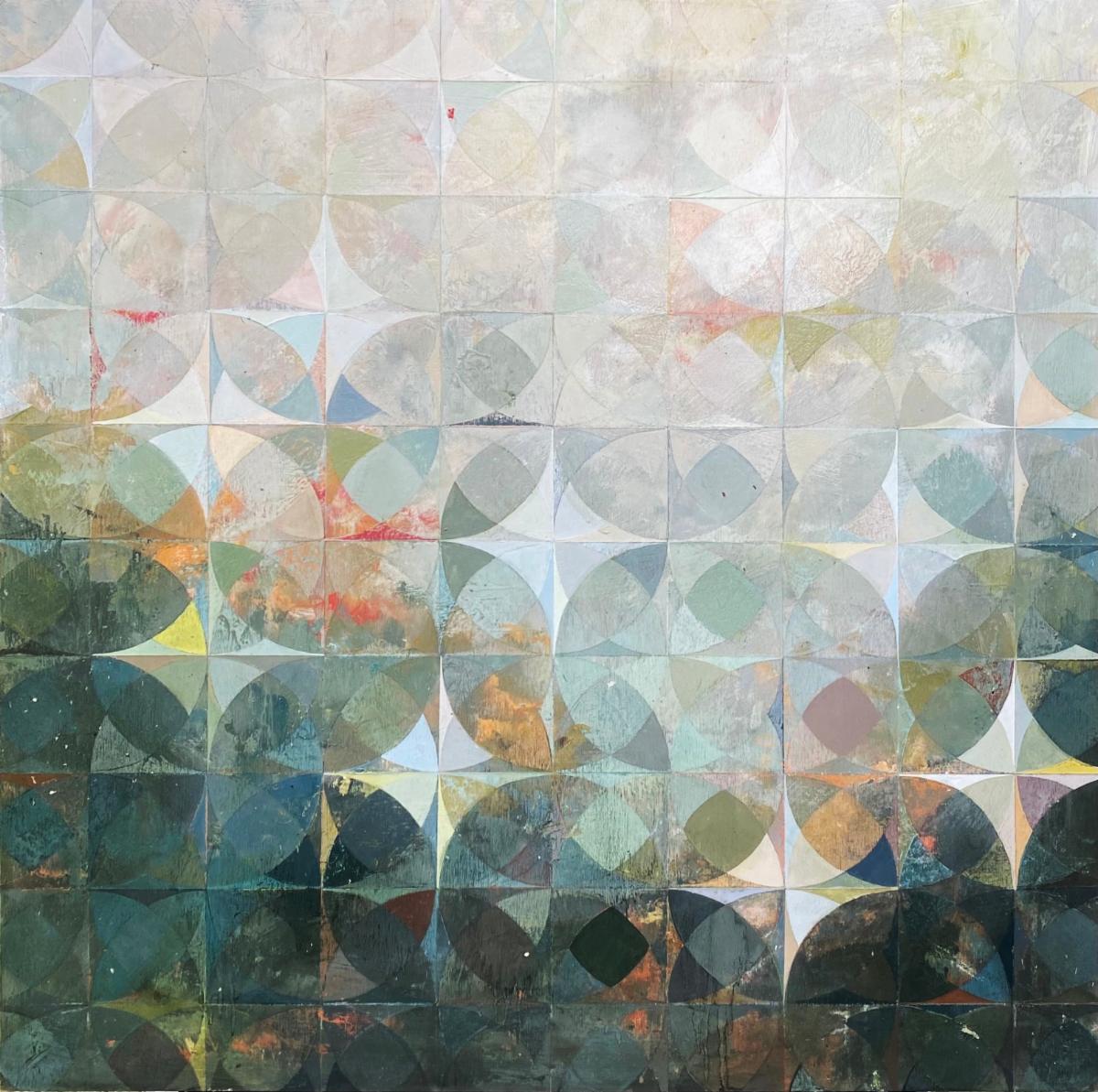