December 29th marked the end of Park City’s autumnal hibernation. Every fall, after a relatively busy summer season climaxing with the frenzy of the Park City Arts Festival, Summit County’s art scene settles, like the bears who used to roam their mountains, for a period of denning, not completely dormant but far from active. Few galleries hold openings during this time, waiting for the winter season and the arrival of the skiers to show off their star artists.

With the opening of their January exhibitions last week, Park City’s art mammals have come out of their burrows and are ready to engage the local and national public with a slew of exhibitions. Many galleries make up for their dormant months with a bumper crop of exhibitions in these winter months (Meyer Gallery has a new opening slated for every week in February and March). For now, however, the galleries are easing themselves into the frenetic busy season (where they have to collect enough nuts and berries to last them through the late spring months) with a number of fine, month-long exhibitions.

The Park City Gallery Association has over twenty members, not to mention the unaffiliated galleries and shops, so to look at every show would be a feat, for writer and reader alike. Consequently, the following is merely a sampling of what you’ll encounter if you make it to Park City this month — do so quickly, before the baseball capped, dark-shaded invasive species of mammals takes over at the end of the month.

At the top of Park City’s Main Street, the Meyer Gallery opens their winter season with an exhibit by Boston-based artist Cheryl Warrick. Warrick’s exhibit fills the upstairs gallery space and spills onto one of the downstairs walls. It consists of a group of mixed-media paintings that interchange a series of recurring motifs and painterly methods on an irregular grid pattern resembling a patchwork quilt. Warrick calls these pieces “a search for wisdom.” Warrick’s visual methods shift between landscape painting, transferred designs, abstract paint mixing and hand-scrawled notes. In her search for wisdom, no one style or form is given precedence. 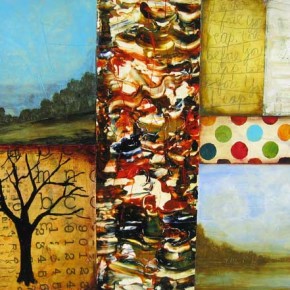 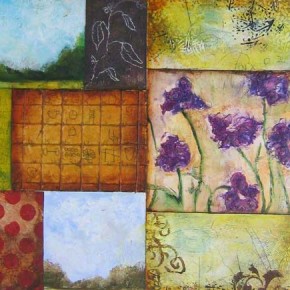 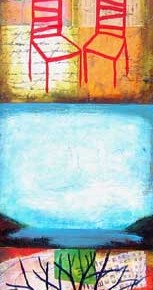 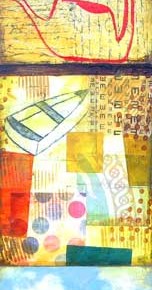 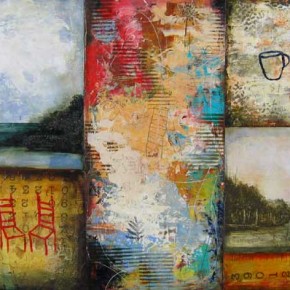 The dominant imagery in Warrick’s pieces are the simplistic line drawings, like a school child’s sketches on a slate chalkboard, which frequently appear in one square of an individual work. Warrick mines archetypal imagery — a boat, a house, a kettle, a cup, a branching tree — to serve as the basis for her “chalkboard” calligraphy.  The remembered childhood evoked by these drawings is called up by other elements in the paintings. A repeating landscape of earth, water, and sky, brushed in thin and loose, brings to mind remembered summers at a grandparent’s cabin. Despite my knowledge of her New England heritage (Warrick is a native of New York) Warrick’s painting brought to my mind the South; not the actual South, but the literary South, the South I know from the novels of Faulkner or the poems of Robert Penn Warren. Maybe it is the nostalgia of the pieces, the yearning for a time when cup or boat were emblems for our existence rather than iPods and Blackberries.

Next door to Meyer, the Terzian Gallery has mounted a joint exhibition featuring two talented Utah painters, Patricia Kimball and Emily McPhie. Whenever I see Kimball’s work, I am reminded of my first encounter with it at Phillips Gallery some years ago. Her landscapes depicting Salt Lake’s east bench were rendered with a restricted, subdued palette, giving the scenes the sense of early morning, before the sun has pulled out the landscape’s brighter colors. A color enthusiast, I felt an urge to see these colors break forth but was intrigued by Kimball’s ability to imply their emergence without actually showing them.

Though I have seen Kimball scrape some pure colors onto canvas over the years, her work has continued to be characterized by a subdued palette. It has also been characterized by an interest in the depiction of figures (in paint, or quite effectively in monoprints as well), notably her series of Winter Olympic scenes from 2002. Though peppered with figures, I wouldn’t call these “figurative works,” as little attention was paid to the depiction of the intricacies of the human body. The figures, wrapped in winter attire, were hulking masses spread across the surface of the paintings. A couple of pieces in the Terzian exhibit are similar to these 2002 works. They are square, with almost non-descript backgrounds upon which Kimball has placed a number of figures, floating or falling in the air. In “Apocalypse” figures are falling from the sky, accompanied by frogs, reminding me of that jolting scene from the film Magnolia, as well as the biblical passage that served as the movie’s source. Kimball’s sly wit is displayed in “Pursuit,” where a businessman, also falling through the sky, reaches out to grasp a floating high-heeled shoe while a more casually dressed man attempts to do the same. As if mocking these men’s attempts, Kimball has painted a dog, midair, stretching to catch a Frisbee. 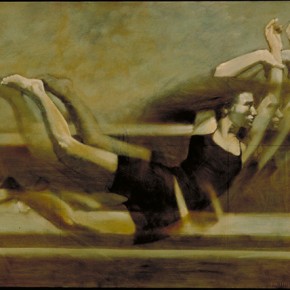 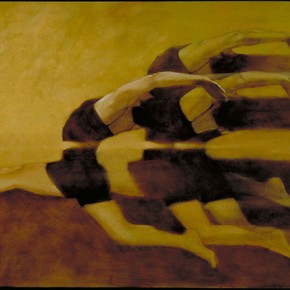 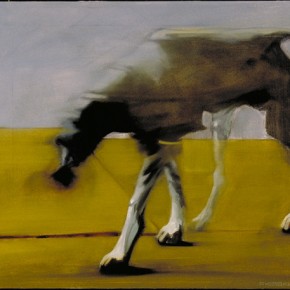 The majority of Kimball’s works in this exhibition are figure paintings of a different sort: the figures are larger, one or two filling the whole canvas, and concentrate more on the details of the individuals. Still, these seem not to be figure studies. These female figures are shown in states of stylized motions, transparent ghost images depicting movement. The artist clothes her figures in

shorts and tank tops so that only their appendages, shooting out sometimes at right angles, are completely visible. The viewer, it seems, is meant to pay more attention to the gesture of the form than to details of human anatomy. Like those first landscapes I saw, Kimball doesn’t let the paintings get away with coloristic fireworks: beiges, tans and umbers dominate, though they can be offset with particularly effective hints of blue tones or streaks of pink in the underpainting. |5| What attracts me about these paintings is that Kimball seems to be able to create that same tension she did with those first landscapes. These figures are in intense and energetic action, but Kimball frames them in a subdued setting, juxtaposing the energy of form with the stillness of her color in a visually delightful tension. 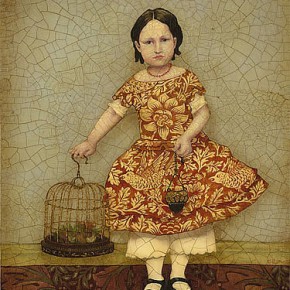 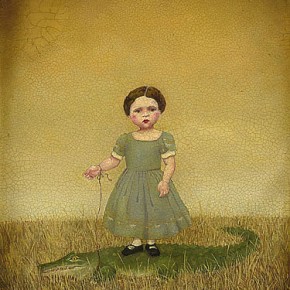 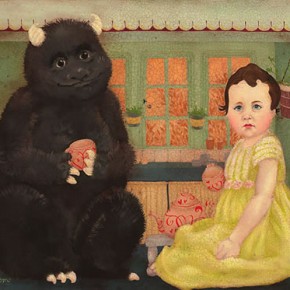 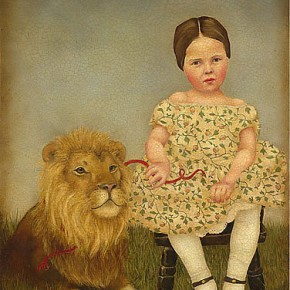 The paintings of Kimball’s exhibition mate, Emily McPhie, operate with a similar subtle tension. McPhie’s small paintings are very still, straightforward and detailed depictions of children. Her doll-like children (usually girls) dressed in late 19th-century clothes, have a measured passivity about them even when they are involved in implausible settings, such as riding a tortoise or taking a crocodile for a walk. Almost every painting depicts a child in some relation to an animal or, in the case of a trio of works, beast. In “Tethered,” a young child in a wallpapered room impassively staring out at the viewer is actually tied to a wholly, black creature. The same creature appears in “Tea Party” having just that. And in “Addie” a young girl holds a birdcage containing a smaller version of the same beast. The settings are all late Victorian, from the preponderance of wallpaper to the circuses motifs (one girl performs with an elephant) and hot-air balloons. The artist has given the paintings a crackle glaze to evoke a sense of datedness and nostalgia. McPhie’s works have an unsettling charm, the caged or tethered animals posing no danger to the children, though they should; the children showing no expression, though they should. It is an imaginary world that teeters between the playful and the precarious and, thankfully, the artist does not dictate our response to it. 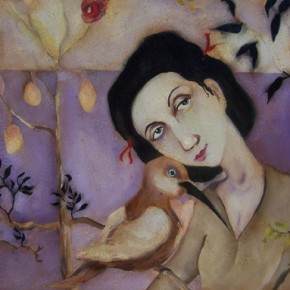 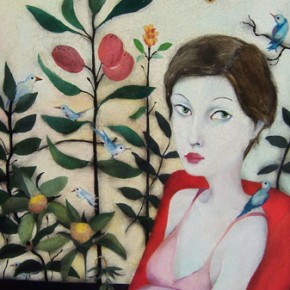 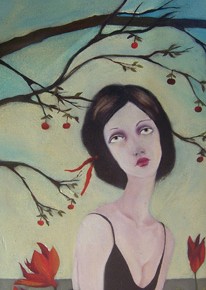 McPhie’s sister, Cassandra Barney, opened an exhibition at Coda Gallery the same night. I must have arrived at the bottom of Main Street and walked into the gallery just as the family reunion began, because I was surrounded by small children, weaving their way (more successfully than myself) through the beaded skirts of Stacy Phillips, also on display. Barney and McPhie are the daughters of Jim Christensen, long-time BYU professor and well-known fantasy painter. His daughters take from him an interest in the childlike world, stylized figures and propped settings. Seeing the two sisters works on the same night brought to the fore their similarities and differences. Barney’s figures are also female, though they are a decade or more older. Animals make frequent appearances in her works, as do trees and flowers. Barney has also applied the crackle glaze in places, though it seems less appropriate on these pieces because they are neither stylistically nor contextually very nostalgic. Barney’s figures are stylized, smooth featured, with ovaline faces perched awkwardly on long necks. In comparison to her sister’s work, I found Barney’s painting somewhat disappointing. Maybe it is because my responses to them were more overtly dictated. In “Freefalling,” a recumbent figure with an exposed chest has a small fire burning on it. In “It’s delicate, it’s my heart” the handle of a kitchen blade comes out of the figure’s blouse. Barney’s women don’t have the same intriguing unease as McPhie’s little girls, maybe because they are older, possibly because they are painted differently. All the pieces have a melancholic, dreamy look about them while being somehow quirky and fun, all of which wasn’t to my particular taste. Maybe it’s a man thing. 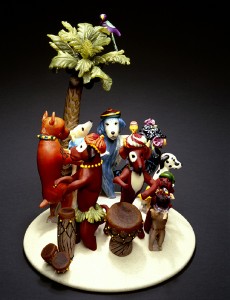 If you like quirky and fun, and haven’t yet had your fill of quadrupeds, then you’ll want to stop by the Kimball Art Center where their main gallery has been devoted to man’s best friend. William Wegman, a painter and photographer well known for his images of canines in costume, presents a suite of photographs showing the Cinderella story with dogs as his models. Also on display are the hot-sculpted glass figurines of Karen Willenbrink-Johnsen, three-dimensional counterparts to Wegman’s photographs, that show dogs in various vignettes and settings: a hoedown, a honkey tonk, the circus.  Along the perimeter of the exhibition space, “funk” artist David Gilhooly fills out the homage to the dogs in our lives with his junk-inspired art.  “Funk” is described by the Center as work that is “between painting and sculpture, features deliberate bad taste and often makes use of unusual materials and found objects.” To give you an idea, Gilhooly’s “Old Dog: New Trix” is a canine cutout filled with the breakfast cereal and “My Dog Spot Wearing Arcimboldi’s Fast Food Shirt” uses children’s meals figurines to create a three-dimensional shirt resembling the 16th century mannerist’s unique style of painting.

There is much more to see this month along Main Street, as well as outside historic Park City proper (such as the Julie Nester gallery) and in the couple of months to come there will be even more. So even if you don’t go there to ski or stargaze, make it to Park City to see what kind of activity the autumnal hibernation has produced.

This was originally published in January 2007 edition of 15 Bytes