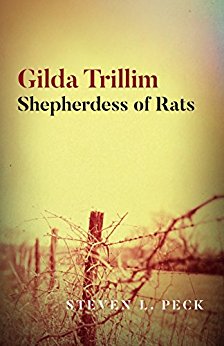 Steven L. Peck’s Gilda Trillim: Shepherdess of the Rats, winner of the Association for Mormon Letters’ 2018 award for novel, is at once whimsical and intensely meditative. It is cosmic in scope, yet profoundly intimate. In other words, it is full of paradox, the kind of paradox that leads the reader to vital epiphanies as they consider the meaning of grace, holiness, and relation.Peck’s second, full-length novel following his debut, The Scholar of Moab (reviewed here), is a theologically rich text that stretches the reader to acknowledge the limitations of their own biases and self-constructed paradigms. One of the most successful things about the novel is that it is provocative without alienating its reader. This is due, in part, to Peck’s characterization of his protagonist, who anchors the novel. There is no other literary character to compare to Gilda Trillim. Badminton player, minimalist author, and 20th-century Mormon mystic, Gilda is so idiosyncratic that she leaps off the page and vividly comes to life, tempting the reader to return again and again to Google just to be sure that she is not a real historical figure.

Gilda is an unconventional novel that does not follow a progressive linear plot, though it does develop and build upon the themes introduced in its early sections. As the epigraph explains, Gilda is “An Academic Work Disguised as a Novel Disguised as an Academic Work” (xv). The novel is presented in the form of a master’s thesis by Kattrim G. Mender for the School of Esoteric Literature at the Mervin Peake Online University of the Arts and Sciences. Katt’s thesis is a source biography on Gilda Trillim, “one of Mormon literature’s most important pioneers,” and contains 24 “Vignettes” that include excerpts from Gilda’s literary work, letters between Gilda and her close friend Babs, and journal entries.

Born to a Mormon family in Idaho, Gilda became a world-renowned professional badminton player before turning to writing. Over the years, her style evolves into bare minimalism. Her later “novels” are series of lists grouped together by the following headings: “Objects,” “Action,” “Attribute,” and “In the manner of.” Although Gilda’s literary work is quite provocative, Katt’s thesis focuses on her personal life, especially on traumatic events that shape her thinking and her faith, like her experience as a POW during the Vietnam War.

While in Vietnam for a USO tour, Gilda’s helicopter is shot down and she is captured by the Viet Cong. This particular vignette is emotionally difficult to read, yet one of the book’s most beautiful sections. Abused and broken—physically, emotionally, and spiritually—Gilda finds herself isolated from the other prisoners and starving to death. It is at this hopeless point that she befriends her unlikely saviors, the rats, who not only save Gilda physically by providing her with food, but also guide her to a higher understanding of love.

It would seem that her friendship with the rats helps her to comprehend fully the necessity of relation. Two years after her imprisonment in Vietnam, she writes in her journal:

So it seems like a thing-in-itself is not revealed even to itself, but only in relation to other things. Alone an object or a thing is nothing. A moon in a universe that held only a moon would not be there. It would have no properties until it related to other things, things that, relating, give it size, structure, and all the rest. The moon is revealed by the light of the sun, by the pull of the earth, by the foot that walks and leaves footprints in the dust. And I similarly find myself manifest by the moon and its shine … Here I stand in relation to an infinity of other objects and an infinity of relationships of objects to one another, which create new objects like the waves created by the moon and ocean which structure and mold other objects and on and on and on.

This particular excerpt is just one of the many examples of Peck’s brilliance, describing complex ideas with poetic sensibility and simplicity in a way that invites the reader to meditate on his or her own place in the universe.

This nuanced, yet powerful, approach is especially effective for the presentation of many of Peck’s theological concerns, allowing him to avoid the pitfalls common to any artist of faith: it is rare that a faithful author successfully captures what is most sacred to them without resorting to cliché or didacticism. Flannery O’Connor, the great Catholic American author, was acutely aware of this difficulty and successfully found the balance between being Catholic and a writer. She counseled aspiring authors against slipping into the comfort of their own beliefs, making them into figurative blinders. She wrote in her Writing Short Stories, “Your beliefs will be the light by which you see, but they will not be what you see and they will not be a substitute for seeing.” Peck’s Mormon faith becomes a lens through which he sees, enabling him to create an expansive, rather than limited conception of the Divine.

In this way, Peck’s theological fiction establishes itself within a rich literary tradition. Like Dante’s Divine Comedy, Gilda imaginatively transcends finite human experience and presents a vision of the divine that defies expectation. As with Dante the pilgrim, Gilda learns the ultimate and simple truth that God is love, the “Love that moves the sun and the other stars.” She learns this lesson through an exploration of ecology, “a harmony of relationships.” Through understanding the necessity of relation, Gilda learns the necessity of love, the driving force of the universe.

In the context of contemporary American literature, Peck’s theological conceptualization is in many ways parallel to Marilynne Robinson’s 2004 novel Gilead. Peck, like Robinson, creates the possibility for deep theological reflection. Gilda is the kind of novel for those, according to Peck’s thesis writer, “who have time not only to read, but to stretch their minds to the distant stars.”

Peck may remind LDS readers familiar with contemporary Mormon fiction of Jack Harrell, whose challenging works ask readers to question their biases and assumptions. In a 2014 interview with Laura Austin for Mormon Artist, Harrell revealed his deep interest in the state of Mormon letters, asserting, “[T]here isn’t a lot of good Mormon literature out there. We live far below our potential. Most of what sells in the commercial Mormon bookstore is pablum. Yet we have such an amazing theology, so comprehensive and gracious. It’s also a religion that is not without contradictions and mysteries. Our writers do so little to capitalize on this.”

Peck’s novel thoroughly fulfills Harrell’s call for an authentic and theologically engaged Mormon fiction. One way he accomplishes this is by exploring the concept of the Divine Feminine. Gilda’s experience in the POW camp culminates in a vision of Heavenly Mother, who voices one of Mormonism’s key tenets: “Ask, daughter. Only in questions does grace unfold.”

This particular episode is refreshing, inspiring, and profoundly spiritual without moralizing. And it is emblematic of how Peck explores the mysteries of Mormon theology in a way that is expansive, thought-provoking, and hopeful. Despite the unique, at times bizarre events Gilda experiences, Gilda Trillum, Shepherdess of Rats is relatable and inviting. Readers will come away from this novel with new eyes—an expansive vision to appreciate the beauty of complexities, and a new sense of curiosity to quicken the mind and soul.