On the Border: Paintings from the Myanmar/Thailand Border Focus Attention on Refugee Populations 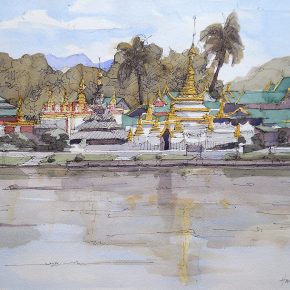 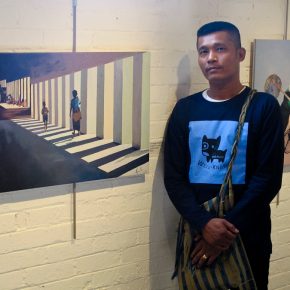 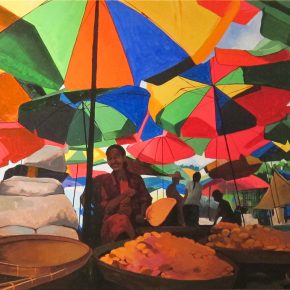 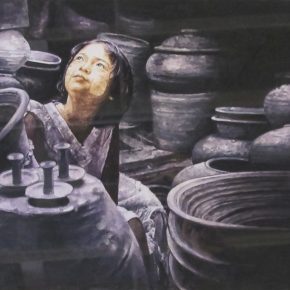 Since 1962, the minority ethnic peoples of Burma (Myanmar) have been subjects of an ethnic cleansing. Many escape into Thailand and live in camps along the border; some have been given refugee status and live here in Salt Lake City.

When local artist Hadley Rampton traveled to the Thai/Burmese border last year to introduce visual art as therapy to Ban Mai Nai Soi camp inhabitants, she learned of two men who were employing their art to bring greater awareness to the crisis in Burma and the thousands who are impacted.

They managed to meet and the men agreed to come here and put on a show at Art Access in hopes of bringing attention to the Burmese refugees in Utah.

Rosey Hunter, then director of University Neighborhood Partners, sponsors of the annual trip to the camp, helped introduce the three artists and now, as an associate professor in the College of Social Work at the U, helped facilitate my interview with Nyan Soe (artist Maung Maung Tinn could not obtain a visa to travel here).

The work of all three artists is remarkable, some of it touching. Nyan Soe works in acrylic; Rampton in watercolor and ink; Maung Maung Tinn in monochromatic watercolor.

Nayan Soe, the son of an artist, arrived in Salt Lake City on Tuesday night and says, through an interpreter, that the new place and new people have made him “totally a new person.” He’s a charming fellow who, not surprisingly, works as a broadcast journalist. He studied art in high school (graduating in 1995) and now attends the National University of Art and Culture in Yangon, Burma’s capital.

(Like math, geography is not my strong suit, but I was ashamed I didn’t know the capital of his native country. Nor was I aware, except vaguely, of the atrocities going on in Burma. Is there not enough international news in this valley, or am I not reading/seeing enough of it?)

Watercolorist Maung Maung Tinn is a refugee from Burma who has lived in Mae Sot, Thailand, border town to the camp Rampton visited, since 1994, as a health worker and artist. When he was a child, he used a stick and the clean surface of the ground as art materials. He writes that his fellow Burmese refugees are living on the town’s garbage dump; some live in brothels; some are in prison; some live in the forest. Their lives motivated him to start painting again. With the help of many friends, his watercolors have been exhibited internationally and sold to help poor families and laborers. A book of his work and writings is available at the gallery.

This very moving exhibition, in the main gallery at Art Access in Salt Lake City, is well worth seeing. It runs from March 18-April 8. During the opening reception on Friday from 6-9 p.m. you will be able to meet Nayan Soe, who has traveled from Burma to be here, as well as Hadley Rampton, two artists with something to say. www.accessart.org