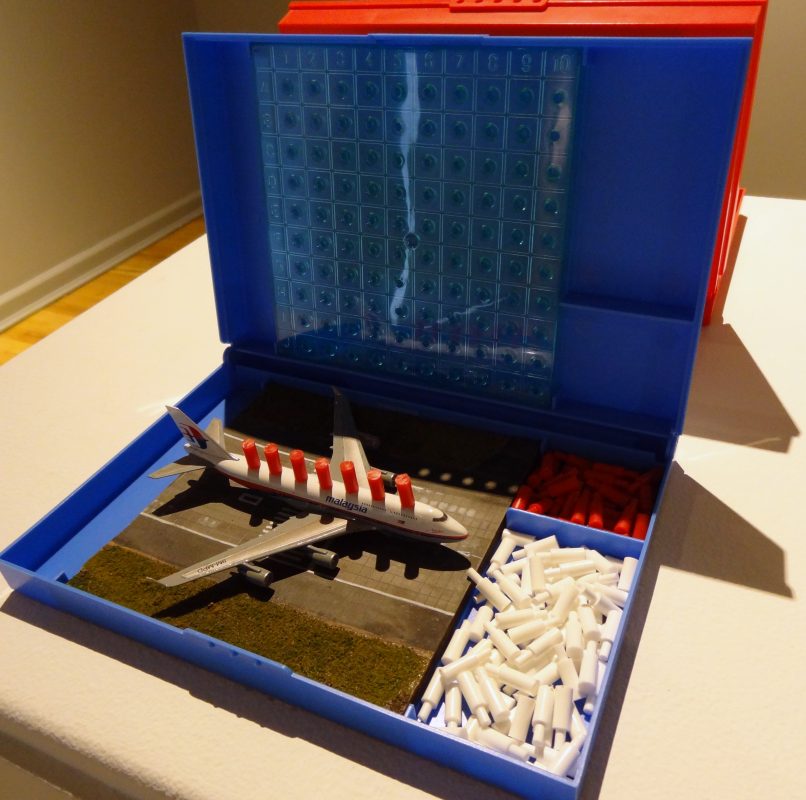 Darn! . . . Shoot! . . . Fudge! . . . . Euphemisms—inoffensive ways of not quite saying what you mean—permeate every language and clog everyday speech. Angry young speakers bristle at having to use compulsory substitutions, which aim to comfort not the speaker but those listeners who don’t want to hear it, who are offended by direct expression and honest feelings. Even as linguists worry that such emotionally powerful expressions can only lose impact if overexposed, euphemism remains a loophole in the sacrament of free speech. Yet artists Holly Cobb and Michelle Montrose Larsen point out that there are other forms of euphemism, not only verbal but also visual that permeate and undermine communication just as much as enfeebled words, while often going unnoticed. To demonstrate their point, they’ve mounted a collection of work by 10 artists (at Finch Lane until April 13) that, as the cliché goes, should have something to offend almost everyone.

For instance, there’s Alison Neville: Weber graduate, artist-in-residence at UMOCA, education coordinator at Bountiful-Davis Art Center, and founder of the Bob Ross Society. Neville doesn’t seem to have met a medium or an art project, from graphite in a gallery to polymer clay in a pop-up show, that can’t benefit by her contribution. Her Nasty Women, a show by female artists that used widespread anger at President Trump to garner support for the indispensable work of Planned Parenthood, showed how art can move away from its traditional role of spectator and closer to the center of events. For Sugar-Coated, Neville has constructed tiny, exquisite dioramas, mostly in pairs, to illustrate the reality of military events. Each pair operates like the familiar children’s game, Battleship: two imaginary players sit across from each other, on either side of a playing board, of which each can see only his or her own side. Unlike war, which is nothing like a game, the goal here is presumably to score harmless points while preventing the other player from doing the same. What both war and Neville’s games have in common is the deliberate obscuring of one’s own actions. At its extremity, euphemism is indistinguishable from outright hypocrisy.

Most euphemisms are recognized as such by speaker and listener alike, and shared as such. Facial expressions and crooked fingers making “air quotes” are sometimes used to signal “I know I’m not being candid, here.” Visual substitutions are another matter, as Jamie A. Kyle demonstrates in two photographic landscapes that, while less realistic than Neville’s, equally evoke games and make-believe. Easily confused for collages cut and assembled from other photos, they probably work better for men who, as boys, played with action figures on not-to-scale, unrealistic backgrounds of furniture, rugs, and other textiles. It’s not hard to imagine how the necessary imaginary work of such child’s play can beget artists, and while Kyle’s works here are more fanciful than realistic, it will be interesting to see what sort of visual vocabulary he invents that may give him more range and control over his effects. 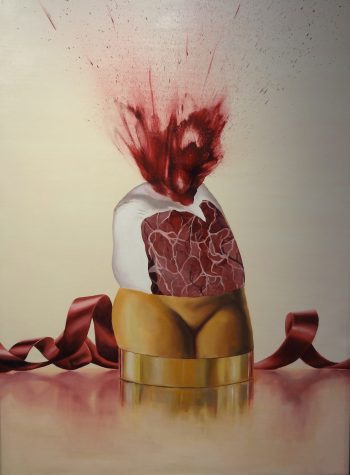 There’s a range of demonstrated ability here, but also schools of thought about the purpose of art. Derrek A. Wall paints his celebrities and Gay icons down to the level where content matters more than presentation. His titles give away the game while undermining the hypocrisy that protects mainstream consumers from what they choose not to acknowledge. Rock Hudson is “Muscle Mary Fairy” and as for Lady (not Princess) Diana, “She’s Gone To a Better Place, You’ll Never See Her Again.” Most political art trades in long life for immediate appeal; this is art bordering on therapy, which tends to do its best work before it leaves the studio. Michelle Montrose Larsen’s hyperrealism, on the other hand, does something similar not with sexuality, but with biology: in other words, not with a current social quandary, but with a most intractable predicament. Her “Luster of Moisture” contrasts the dry exterior and moist interior of human bodies to call attention to fortunes spent seemingly trying to invert the healthy, natural order. Some of her references are arbitrary or uncertain, but the glossy advertising-level skill with which she represents them identifies their dissembling technique as a perversion of talent that renders the underlying arguments moot.

Ever since the Romans, the apotheosis of representation has been trompe l’oeil, the image that fools the eye. Scott R. Horsley drawing the front page of the newspaper fits squarely in this tradition, with an added twist. With their common title, “All Out War On Everything,” and their references to Supreme Court nominee Neil Gorsuch, Vice-President Mike Pence, and former presidential aides Reince Priebus and Steve Bannon, these pieces leave little doubt that Horsley is “drawing” a line between partisanship and the disregard for truth. It’s just hard for true believers to hear their opinions criticized. The true genius of Horsley’s technical approach, however, comes in the easily overlooked squirts and sprays of paint—color on one side, black and white on the other, which look spontaneous until examined more closely, at which point their flawless mirror-imaging reveals how the totally false and artificial can be made to look authentic. 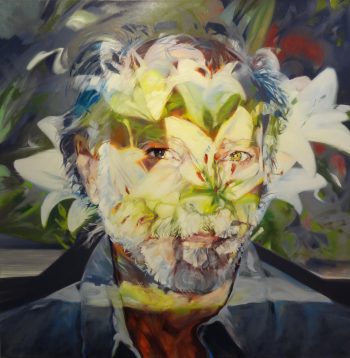 Parts of Holly Cobb’s paintings can also fool the eye, or could have before she overpainted them. Her four subjects—Aji, Heather, Alisha, and Joe, all in monumental headshots—look variously like photos or impressionist portraits, over which she has loosely painted bravura fragments related to how she sees them in her mind. For the duration of the show, she has attached to each a greeting card that also refers, in an arguably more euphemistic language, to their significance to her. She has identified her concerns as sex, aging, pregnancy, and death, but companionship, solitude, possibility, and bereavement are equally present. And while euphemisms often confound and blunt encounters with all these experiences, the masks Cobb paints over her loved ones (for surely she must know and care about them deeply), like the birthday candles that illuminate Heather’s face, do more to ennoble than to obscure them. It’s as if she set out to reveal some knowledge so personal and powerful to her that it vaporized the euphemisms she set out to expose.

Euphemism, with its implied duality of ideal truth versus deflected truth, suggests that it might be well represented by a pair of images. That was the strategy chosen by Keith Beard, but “The Believers of Alternative Facts,” his witty and evocative combination of sculpted and painted figures, joined together in turn by an assemblage of industrial and biomorphic elements, ends up perhaps too perfectly balanced to make its point. For those in the audience who imagine that art is a struggle because the blank page so totally defeats the would-be artist, here is a revelation: the real struggle begins much later, at a point non-artists never encounter, when a good idea and skillful execution lead to an expressive deadlock. Beard has so completely matched his red and blue hells that it’s impossible to see the advantage of one over the other. And while it’s true that two competing sides may agree on a goal—say, ending school shootings—but totally disagree on the means to achieving it, that does not make the two approaches equal. Even if there are errors on each side, those will not be, cannot logically be, the same mistakes. Perhaps more to the point, there are no “alternative” facts. The alternative to a fact is not a fact at all.

Another artist with only one piece in Sugar-Coated, Brecken Bird, sidesteps the more common side of euphemism, when it’s used to conceal an unpopular truth, in favor of an uglier reality, which is that verbal deception can save embarrassment, inconvenience, and even lives when used to bypass social hypocrisy. Like Derrek Wall’s “Friends of Dorothy,” “A Walk With Aunt Flo” depends on viewers recognizing a turn of speech that may not be familiar to everyone, but which in the past eased the task of evading a whole host of unconscious and prejudicial values and judgments: a job that isn’t done, but has only changed its location. 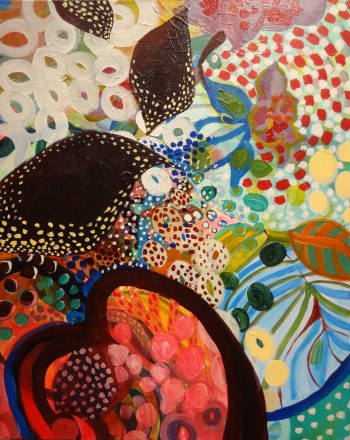 Neither Lisie Beck Brundage nor Fidalis Buehler presents the sort of clear choice between reality and its willful replacement that some of their fellow artists attempt. As one of her titles says outright, Brundage’s canvases create polite fictions, from “Good Manners” to “Disagreeable.” The images so labeled might be described as vegetable or biomorphic abstractions: pleasing visual gardens inhabited by nature neither red of tooth nor claw. She almost denies that irony even exists, except that she oversteps into fantasy: in a world where reality is completely replaced by euphemism, nothing can possibly answer to its name.

Fidalis Beuhler, on the other hand, is a living embodiment of irony. Because of his mixed American and Micronesian parentage, he’s often described as biracial, but race is a fiction invented by post-Renaissance Europeans to justify exploiting the rest of the world, and two centuries later it still has no basis is biological fact. So to supposedly belong to an allegedly inferior race that has no actual existence is to risk drowning in irony. As for Buehler’s art, meanwhile, its charm—charm being one of art’s vital organs—lies in its seeming to originate outside any of the artistic traditions that were, in any case, unavailable to him growing up, so that when he began to invent his own visual world he was able to partake of some primeval and essential visual characteristics. By escaping what was predetermined for other artists, he found something true that was common to all. 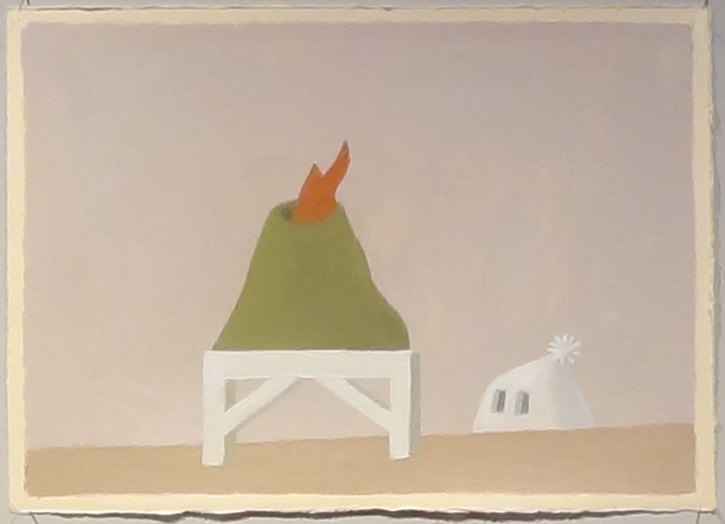 Visitors to Finch Lane during the run of Sugar-Coated will have the chance to cast a vote on the show. Not to worry, though: no one will be asked to choose a favorite artist or artwork. Rather the curators have divided the realm of euphemism into five areas of conflict: emotion, truth, social-political issues, trauma, and the body. Each in turn has five or six examples, and members of the audience are invited to vote for one, two, or more of them, and vote as often as they like. Faced with the question, no one should be surprised to realize that there are some things that are more difficult than others to discuss. Like art itself, euphemisms can be tools for self-discovery.