Off the Wall Materials and Forms Interact in Springville Exhibit 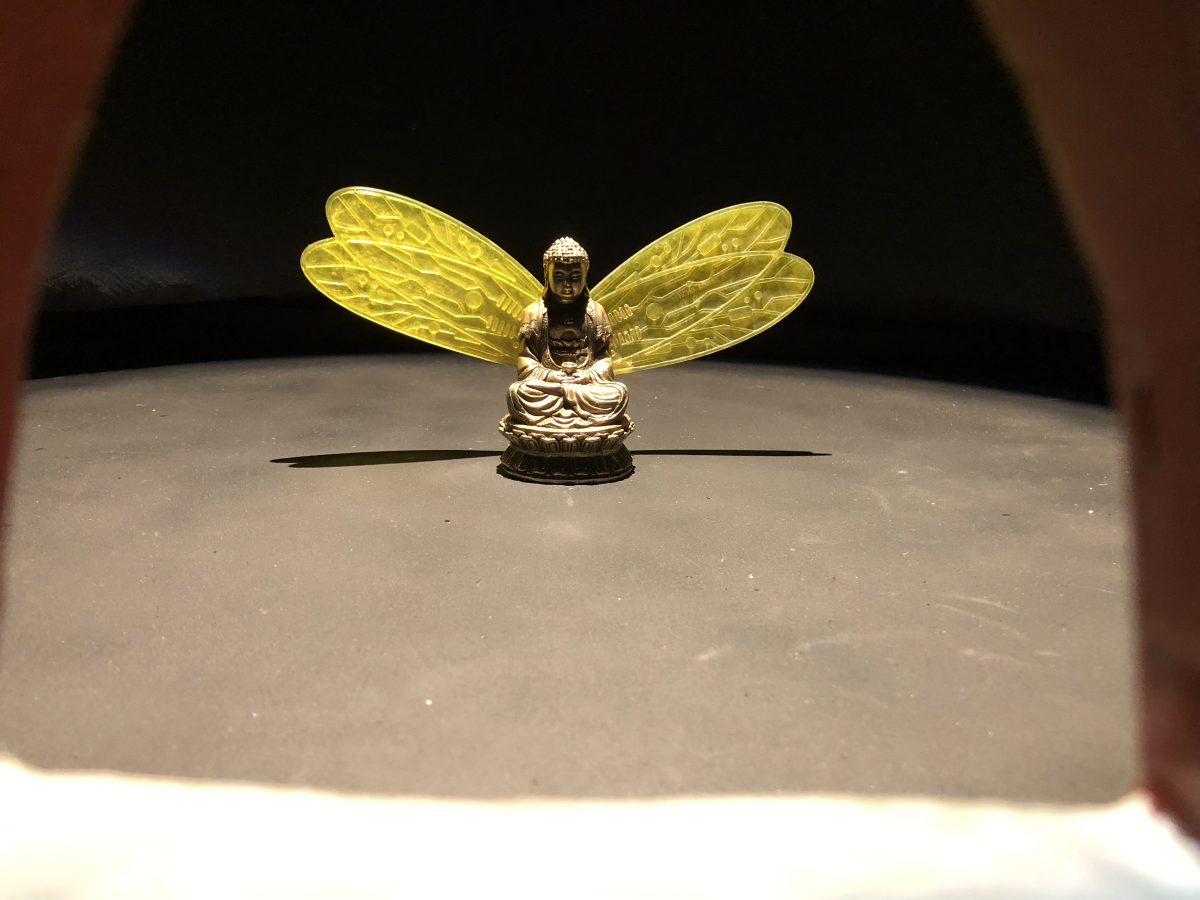 The ancient Romans liked to build gardens next to their homes to open up space and provide vistas. Where that proved impractical, as in urban Rome, they painted those gardens on the walls instead. Even today, the House of Livia — wife of Augustus, the first emperor — displays a garden that fills an entire wall, complete with trees and fences. By the time of the Renaissance, pictures had become visual metaphors for windows, spaced around the walls of a room, with sculptures and furniture placed accordingly. That practice still applies today, and a traditional museum like the Springville Museum of Art will boast gracious rooms with paintings that “open up” the walls and cast imaginary light on the furniture — benches, chairs, tables, and sculpture — within. But what does a curator do with a collection of twenty Contemporary sculptures that defy the label and decorative status of “statues,” which have been taken out of the museum’s stored collection with the intention of focusing entirely on this important medium as a standalone art form?

The solution at Springville is both novel and effective. They’ve selectively covered their pale walls with large black panels, spaced as paintings might be and creating a compromise, between the tradition format and such extreme modernism as might display the sculpture in a visual vacuum. This approach forms a sensual bridge between statuary, which is a figurative art, and sculpture, which can be as much about ideas or feelings as appearances. 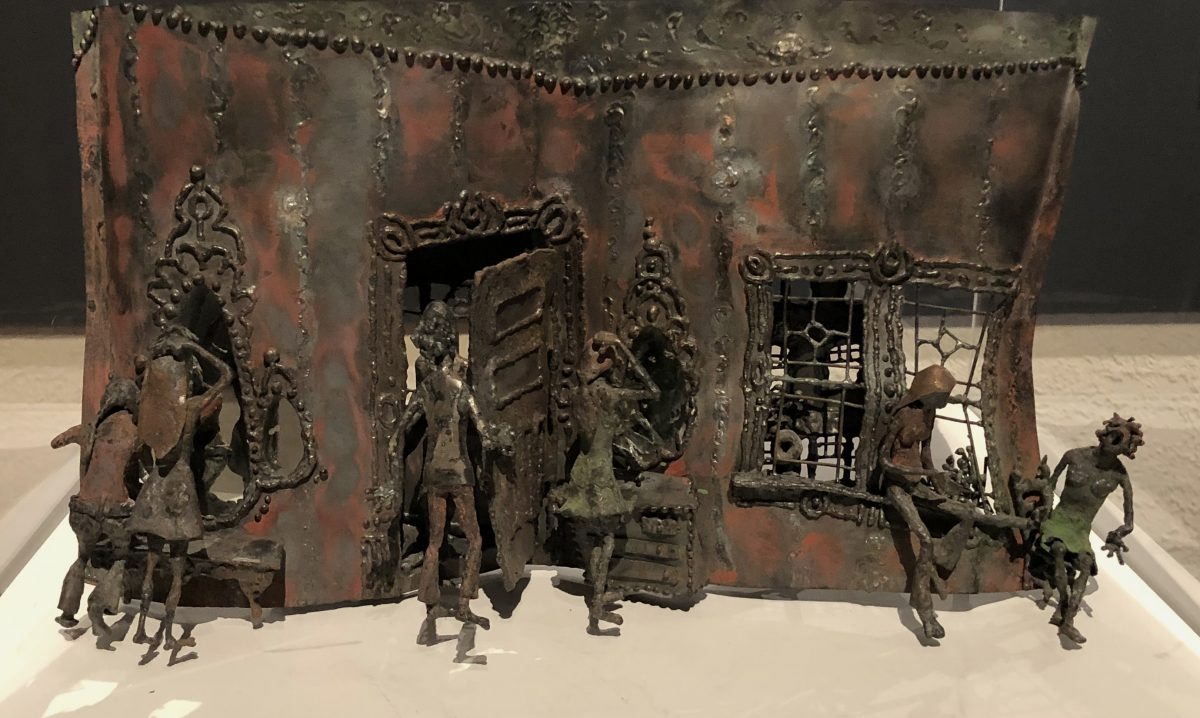 That said, the collection here runs a gamut of approaches, starting from the narrative representation of Sally B. Nelson’s “Vanity Lair” (1975). This torch-carved metal tableau presents a readily identifiable, highly ornamental room peopled by half a dozen young women who primp at mirrors or engage in demonstrative conversation. One of them opens a central door, through which she and we can see a seventh figure, who has come seeking one of the occupants, or perhaps to ask a question or deliver a message. The intricacy of the detailing and the colors produced in the metal by heat are enriched by the view through cut-out windows, through which we can glimpse another room and further activity. By placing the viewer both outside the action and yet mentally inside the space, Nelson makes us voyeurs, participants in a one-way conversation where we hear and see but do not speak or appear, although in this instance we cannot eavesdrop and will never know what is truly going on. Only our imaginations, powered by the engine of curiosity, can answer the inevitable questions these sensitively detailed character sketches bring to mind.

On the other extreme, Trent Alvey’s “Idea=Form” (1994) strips the practice of sculpture to a minimum while demonstrating that while an idea, in itself, may be simple, its elaboration in the material world can be complex. Seen from the front, this vertical stripe of gray, highly reflective stainless steel is crossed by two bars, one white and one black. Running up and down through its center is a beam of light as straight as the path of a photon. Take a step to either side of this lesson in how parallax works, though, and what was thought to exist is seen to be an illusion. Both the steel and the neon tube that produces the light are bent, the black and white bands are subjective explanations invented by the mind, and two dimensions have become three. Trent Alvey is the Utah art scene’s gift to the world of science, and I think that if Albert Einstein could see this, he would say, “Ah, yes: and that is how gravity works.” 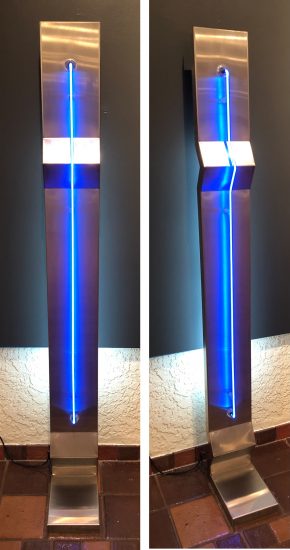 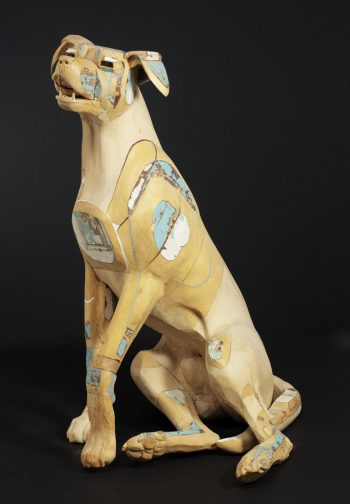 Between those two extremes lie such blended works as Silvia Davis’ “Guest” (1994), an impeccably realistic — right down to the protruding tongue — life-sized dog carved not from a single block of wood, but from a number of wood blocks the artist first laminated together. Rather than seek to hide these joints, as sculptors have traditionally done, she selected her raw material from previously-used wood that still had paint on it. Thus the history of the material is revealed in spots where the paint interrupts the suspension of disbelief and forces the eye and mind to alternate between two realities: the no-longer living blocks of wood and man’s everlasting-best-friend. Another example is Frank McEntire’s “Buddha in the Beehive” (2000), wherein the artist shares his discovery that one of the most important symbols of Mormon theology, the beehive, closely resembles the stupa, an architectural form favored by Buddhists for the making of shrines. To complete the metaphor, he places the bee’s wings on a Buddha who sits in the center of the spacious hive, visible through a bee-sized doorway and lit from above. 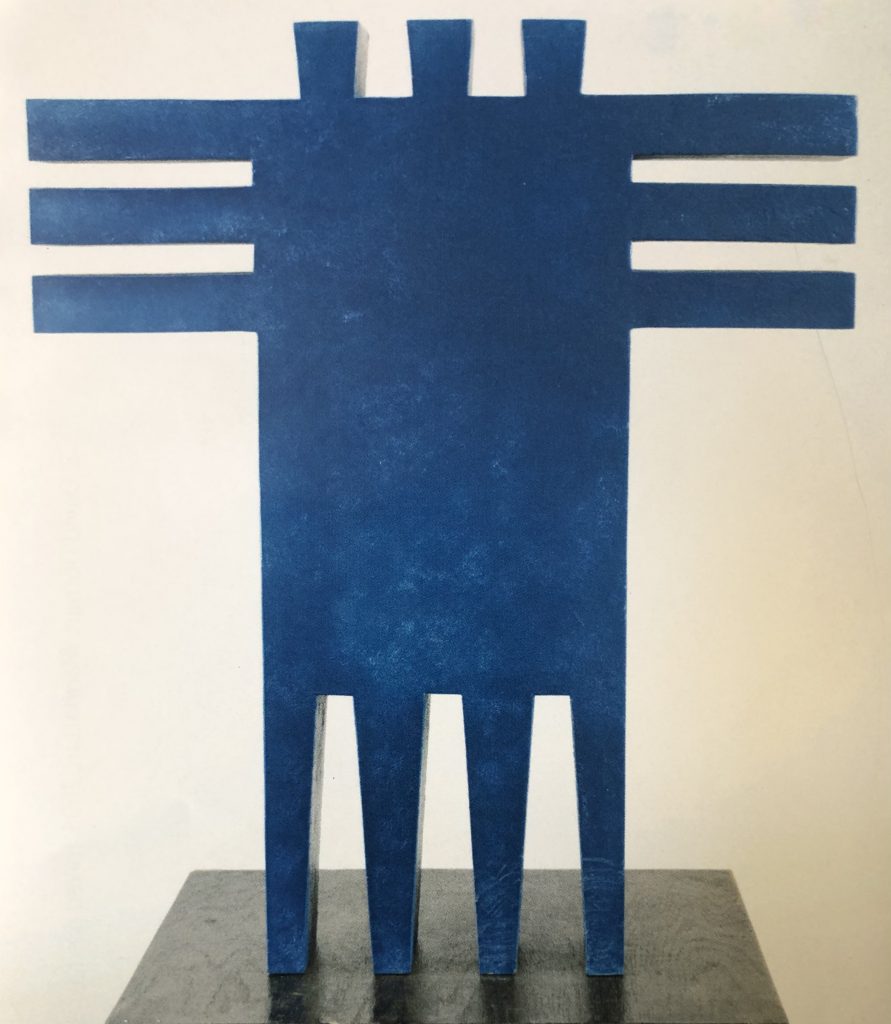 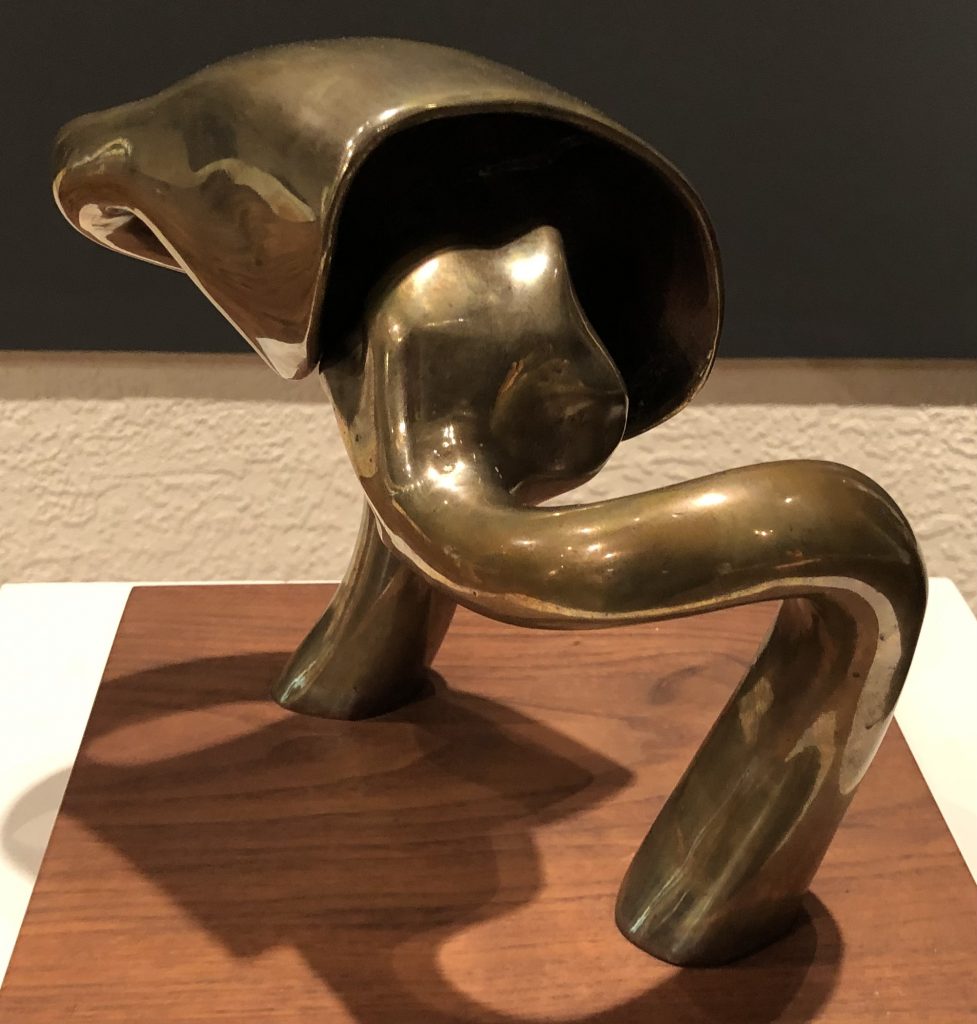 There are numerous language and ethnic groups among the indigenous peoples of the Pacific Northwest Coast, though the most-publicized, who do in fact live along the coast, are not all of them. Vast areas lying inland are also populated by these peoples, including the Gitksan, whose evocative name means People of the River of Mist. The Gitksan are celebrated makers of totem poles, monumental carvings that serve numerous purposes that range from memorializing to mocking. Well within their aesthetic range are single figures, but Raymond Vincent Jonas, in his gallery-scaled “Gitksan” (no date), updates the genre with an unpainted, heavily abstracted human form that in place of paint has only a couple of incised lines as markings. Identity plays a role in this, but also a powerful, if subtle, presentation of fertility. If we listen carefully, Jonas can be heard to say, We Survive, and, We are Here.

Some of these twenty works display sensuous, even voluptuous energy, like the organic, interpenetrating bronze biological forms of Travis D. Crowther’s “Reflective Involvement” (1975). At least one abstracts a traditional conundrum: Sherron Dee Hill’s “The Trinity” (1969). And there’s even a sentimental favorite: Marcee Blackerby’s “Western Flyer” (2015), wherein a child’s identification with adventure becomes complete. Materials and forms interact and compete with each other in a compendium of contemporary sculpture expressions: artworks that are not seen often enough and cannot be seen too often.

Off the Wall: Sculpture from the Museum Collection, Springville Museum of Art, Springville, through Dec. 11.