Of Books and Writers: The Printed Garden Opens in Sandy 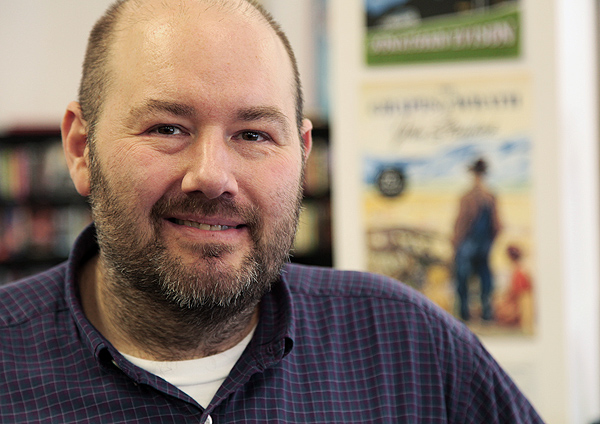 Aaron Cance is everything you think of when one says “bookseller”–that is before the age of Barnes & Noble and the now defunct Borders Bookstores. He’s a gentle, thoughtful-looking man with facial hair and a little nerdy with how he talks about the industry. He offers an astute voice in recommending books that will bowl you over, and, of course, he’s a writer and literary critic himself.

An author of two novels, Cance is a regular book reviewer, his byline appearing in Poets & Writers and in 15 Bytes (you can read a sample of his work here), and he’s been a go-to guy when it comes to vetting books for consideration in our annual book awards.

A feature for years at the cozy, buzzing King’s English Bookshop in Salt Lake City, Cance has recently struck out on his own. The Printed Garden in Sandy is a brand new independent used/new bookstore. 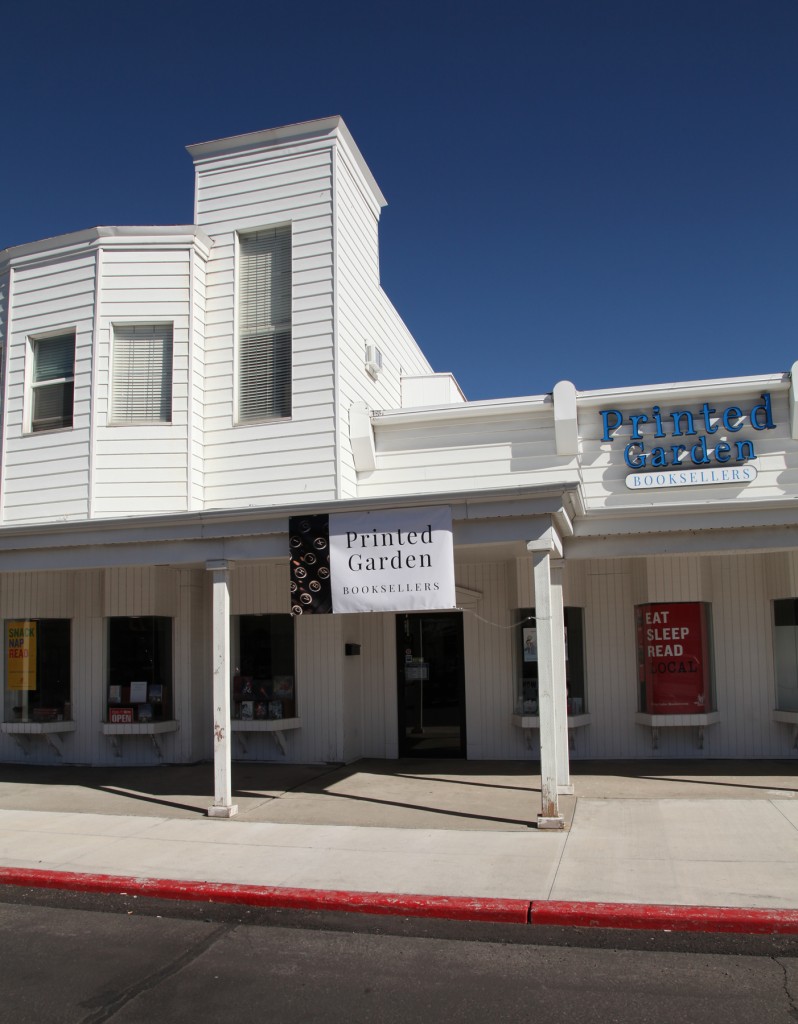 A new bookstore? Almost unheard of these days. Anne Holman, manager at the King’s English, says, “The only thing better than an indie bookstore is more indie bookstores. I’m thrilled for Aaron and the fruition of his dream, to own and operate his own shop!” The Printed Garden’s grand opening is this Saturday, February 20, and as Holman suggests, this is cause for celebration–not only for Cance but for the entire Utah literary community. In our age of Twitter and sound bites, writers and lit hounds somehow still exist in a place where poetry and long-form prose are de rigeur. Writers tend to be solitary folks, so all the more reason to pop the cork this weekend at the opening of a gathering place for not only those tweed jacket and bad hair (or no hair) types whose craft is wordsmithing, but readers in search of the latest mystery or techno-thriller. Our understanding is that The Printed Garden will be as much a community gathering place for book clubs and readings as a pit stop to browse the latest Stephen King novel.

15 Bytes caught up with Cance online to ask him a few questions about his new digs, and the general state of book selling.

15B:  Why did you decide to go with a used/new book format?

AC: When I was considerably younger, I saw this model in the Boulder Bookstore.  At the time I wasn’t working in the book industry yet, but it made a marked impression on me. As a customer, I loved that they had all the newest books but, at the same time, I could find older, secondhand copies for half the price of a new book. It also allowed for the potentially magical encounter with the book that I never knew I always wanted. To this day, that’s what I love about shopping secondhand bookstores. I usually go in with something specific in mind, but have budgeted for the book that I never imagined I’d find.

There were a couple reasons.  From the very beginning, it made sense to build something in this part of the valley. There are so many great bookstores up north already, all in really close proximity to one another, given the overall size and scope of the urbanized parts of the valley. I wanted to open a great independent bookstore that would serve Sandy, Draper, South Jordan, and some of the other communities that are on the southern end of the valley. These are robust and rapidly growing neighborhoods full of readers who would have to drive 30-40 minutes to get to these–places. Furthermore, I was floored to learn, in the early stages of my research, that 74% of the adults in Sandy have some formal education beyond high school and nearly 50% have completed some type of advanced degree–so I had a good sense that there would be a lot of readers around.

My final location choice was a great space in Sandy’s Historic Union Square shopping center.  I swore up and down (and back again) that I’d never put a bookstore in a plaza, but Union Square is not at all what we think about when you say shopping center. It’s not a standardized strip mall full of big-box outlet locations. Union Square is made up of independently owned, family businesses. They’re just about all businesses that are owned by people who live in the valley. As such, it offered me a terrific variety of neighbors. Another big selling point was the architecture of the plaza. Each building has a distinct look from any of the other shops. The overall effect is that visitors are given the impression of being on the main street of a small village.

15B: What did you learn from being at King’s that will help you succeed as a bookstore owner?

AC: I couldn’t possibly include everything here. The King’s English was extraordinarily supportive of me. They saw that I was very interested in as much professional development as possible, and did everything they could to help me with that. I was able to attend a number of conferences, they always took the time to explain various processes and business practices to me, and I always seemed to find myself in places where there was an open exchange of information about the industry, in general, and the store, specifically. If there was any one takeaway from the years that I spent there, it would be the importance of engagement on every level. Engagement with the publishers, engagement with the sales reps, engagement with colleagues and co-workers, engagement with store guests and, most importantly, with the community that you’re in. A lot of people set up shop and wait for customers to come to them. You really have to become a part of your community and make every effort to get to know each and every person who comes into your store. That’s the new business model. I think a lot of people are getting tired of being a sales statistic. They don’t want to be invisible. They want to be treated like they’re important, like they matter, and at the end of the day, I think that in this age of electronic relationships and internet commerce, real human contact, real personal relationships are something that we’ve all become hungry for, to some extent.

15B:  What are the challenges as you see it?

AC: I’m actually really happy with the store itself. Everything came together really nicely. I have a great design, and the people who’ve been in have been very complimentary about it. I think my single biggest challenge that still lies in front of me at this point will be integrating with the community around me. Quite simply becoming a visible and important part of the neighborhood.

15B:  Do you have a live cat who lives in the store? Overstuffed chairs?

AC:  I have plenty of seating on the main part of the store – we have four tables, each having four padded chairs and a couple other places to sit. I wouldn’t go so far as to call them overstuffed. I have, however, created a very comfortable space on the lower level of the store for book groups to meet and individual guests to read if they’d like to. The kernel of the idea was to build a comfortable, distraction-free book club room that would be of free use to book clubs who purchased their monthly selections through the store. The group would provide me with a list of their selections for the next 4 to 5 months, and I’d always make sure that, by the time of their meeting, their next selection was in the store and available for pickup.

15B: What is the state of the independent bookstore now that Borders has folded and B&N seems in trouble?

AC:  According to a study conducted by the American Bookseller’s Association, the number of independently owned bookstores in the United States has grown by 27% since 2009, and 440 new independently owned bookstores have opened since that time. It actually may be more because the study is a couple years old now. There seems to be a resurgence of interest in independently owned and family owned businesses of late, and I don’t think it’s an anomaly. When you go into a family owned or independently owned bookstore, you have an altogether different experience than you can find online or in a big-box retail operation. It’s more personal. You’ll find yourself working with someone, one-on-one, who has a broad, deep, and specialized knowledge of his or her work–in my case, literature–and you’ll find yourself in a shop that hasn’t been assembled by some computer that calculates units sold in individual regions, but has been carefully assembled and curated by who works there. 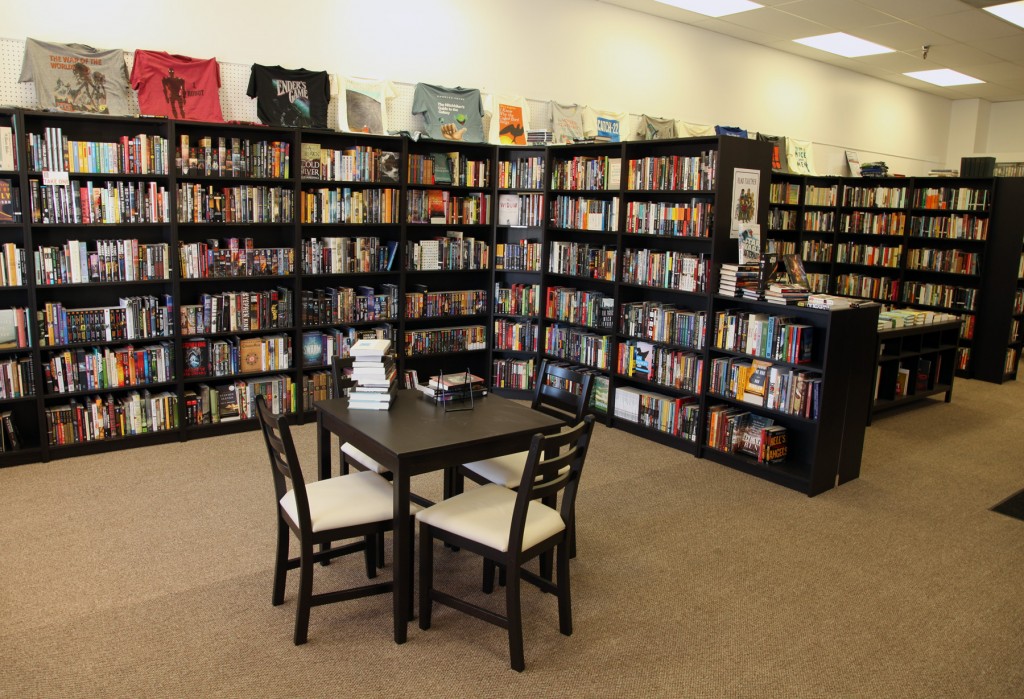