OCA’s Captivating “Land Body” Pushes Against the Stereotypes of Both 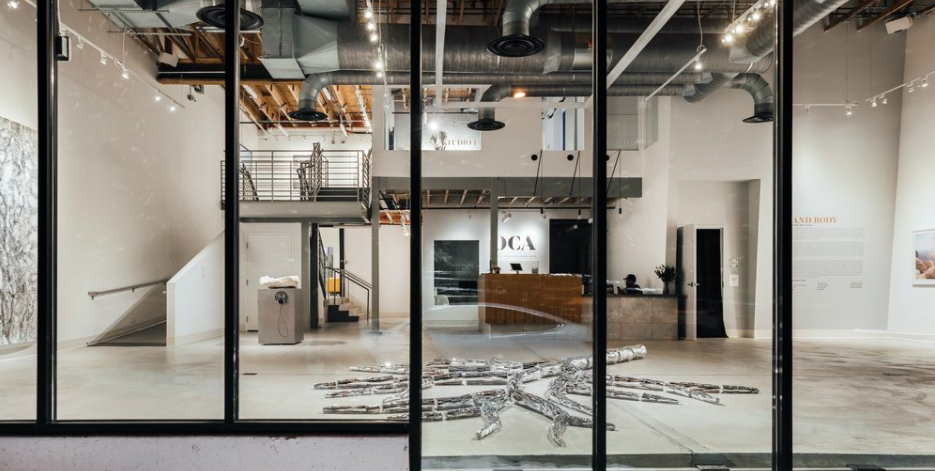 Pushing back a black curtain, you enter a small room where your ears are met by women’s voices singing the words to Woody Guthrie’s “This Land is Your Land.” Overlapping these vocals is the sound of a gunshot hitting metal. At the same time, you notice, in the very center of the room, a pile of white rocks stacked on top of each other. A strand of barbed wire tangles itself around the pile and images of earth, vegetation, and running waters are projected onto the stones. In a sudden shift, faces and bodies replace the video of earth and eyes peer up at you, arms and legs turn to rock. Then the rocks take on words: one large stone presents a word while the small stones surrounding it relay synonyms or definitions of the word. Words like “private” are surrounded by “ownership,” “property,” “personal,” “right of possession.” The projection switches to the word “public” and the surrounding stones change again to say things like “available to all.” On the stones also appear phrases like “Earth as Mother,” “temptress,” “virgin,” “thrive,” “capable of living,” and “viable.” Looking up to find the source of the gunfire you see a tree branch sticking out of the wall, a white tank top hangs from the branch. Projected across this women’s top is the sign “Private Property – No Trespassing.” The sign is riddled with bullet holes. Each time the gunshot is heard, a new hole appears. This is “Battlegrounds,” a work by Wendy Wischer that brings to light both environmental and feminist issues cleverly. The issues are juxtaposed, while both land and women’s bodies have been/are being threatened and destroyed under government policies, the private ownership that land is afforded is not given to women; whose bodies are being controlled by public opinion and government officials.

This piece is part of Ogden Contemporary Art’s Land Body, a striking and wonderful exhibition curated by Kelly Carper. With relevant works and unique experiences, Land Body is hauntingly beautiful, from Josie Bell’s geologic canvases of oil, sand, marble dust, sawdust and stone  to Jill O’Bryan’s large-scale graphite drawings to Al Denyer’s hanging thread that forms a mountain ridge line. Working in Utah, New Mexico and Arizona, each of the 11 female artists artists featured explores the relationship between themselves and the earth, often integrating the female body in their works. 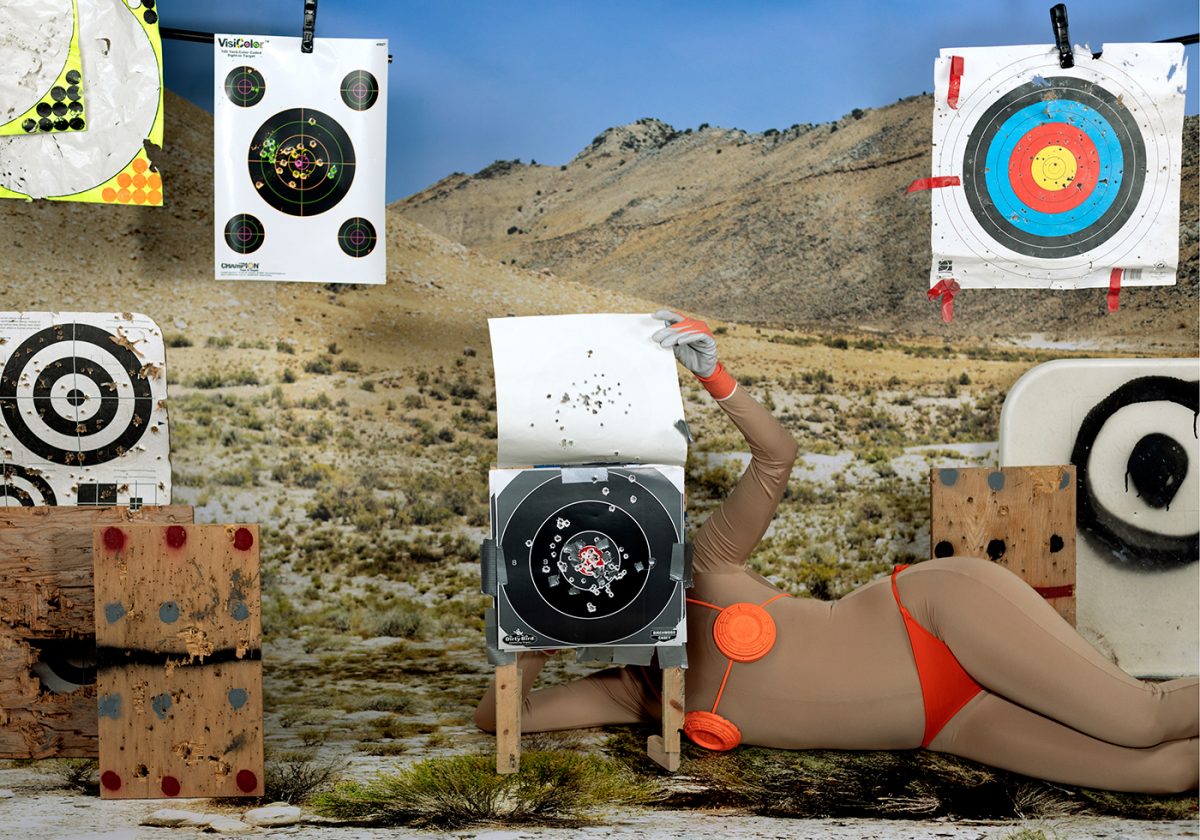 Jaclyn Wright’s “Untitled” echoes some of the juxtapositions in Wischer’s “Battlegrounds.” In the image, a desert scene where brown hills meet a blue sky serves as the backdrop for different types of targets used for recreational shooting and practice. Behind one, duct-taped to a wooden stand in the center foreground, a woman stretches out in a “classically seductive” pose, laying on her side, her head resting on one hand, her knees slightly bent to accentuate the curve and contrast between waist and hip. She wears a bright orange bikini, the top of which is made out of clay pigeons. But her face is hidden behind the target and, underneath the bikini, she is clearly wearing a skin-colored unitard. Even the single hand holding up a page of the target is covered in a glove. The woman’s body is completely covered but she is still seen and being used as an object, her face becoming the target behind the sheet of paper she holds. The message is clear: we exploit land just as we exploit women’s bodies. Both are used by individuals for personal gain, regardless of the poor consequences that are then inflicted on the victims of these actions: women and the land. 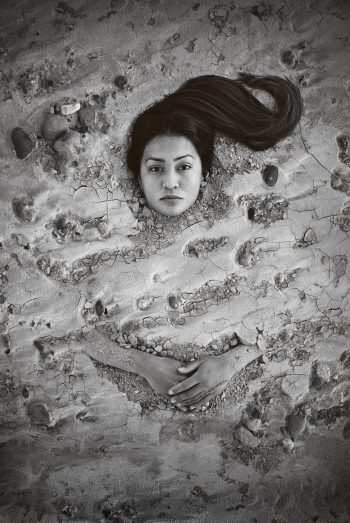 Cara Romero’s work feels very different from Wischer’s and Wright’s. She offers the viewers a different, though equally needed, perspective and experience. “Sand and Stone” is inspired by the origin stories of Romero’s Chemehuevi ancestors, which dictate that the land is born from the body of the woman creator. In Romero’s black and white photograph we see a desert floor with cracks forming in the dried dirt and rocks half-buried in the earth. A face peers out of the dirt, dark hair swirling across the earth and face looking straight ahead into the viewer’s eyes. Her expression is serene yet strong with a look of determination in her eye. The woman’s forearms and hands also extend out from the earth, one hand gently resting on top of the other. Her strength is palpable, as she appears inseparable from the earth; it is her home.The piece draws you in and the line between body and earth is blurred.

Sama Alshaibi’s “Wasl” (Arabic for “union”) is a nine-minute video that follows a female protagonist as she travels a path through the Middle East, North Africa, the Maldives and Hawaii. The latter two locations will be among the first places to disappear as ocean levels continues to rise. Alshaibi recognizes the urgency of this event and its need to be addressed as a shared issue among the world. The video itself is methodical and beautiful. Vast landscapes of water, desert, and sky fill the screen, while the female protagonist is often shrouded in white or black flowing fabric. She walks slowly into the water, across the earth barefoot, and is also shown gently touching the earth as if she is blessing it. The music, which accompanies the video, is an ever-present vibrating sound overlaid with a single flute or single string instrument at different points in the video. The music and video, which are frequently slowed down or mirrored, give the video an overall solemn but beautiful effect that almost feels like nostalgia for a time when humans had not yet inflicted this extreme violence on the land.

Nikesha Breeze’s “Stages of Tectonic Blackness” represents phase one of a three-part film. This phase is an eight-hour durational performance that has been condensed to 24 minutes. “Stages of Tectonic Blackness” is a mourning dance for Black bodies and Earth bodies. It is an act of Black Queer resistance, decolonized time, and a reimagined future, which features prayerful movement, music, and Black philosophy. Like “Wasl,” this work feels methodical, each movement is purposeful and done with strength. The music, comprised of string instruments, holds each note long and fluidly, like big rolling waves of the ocean before they crash. A violin plays more quickly over these held-out notes that give contrast to the music. The work invites its viewers to slow down and feel the words, music, and movement of the artist. Earth and body become intertwined in the film at different points when a body lays across smooth stone, curving with the movements of the rock. There are also moments where branches encircle the face of the artist and extend upwards. The earth becomes an extension of the participant’s bodies. “Stages of Tectonic Blackness” invites all to question and understand how the environment, in its current state, is a product of racism. The work highlights Black bodies, Black experiences, and our racialized relationship to the earth. 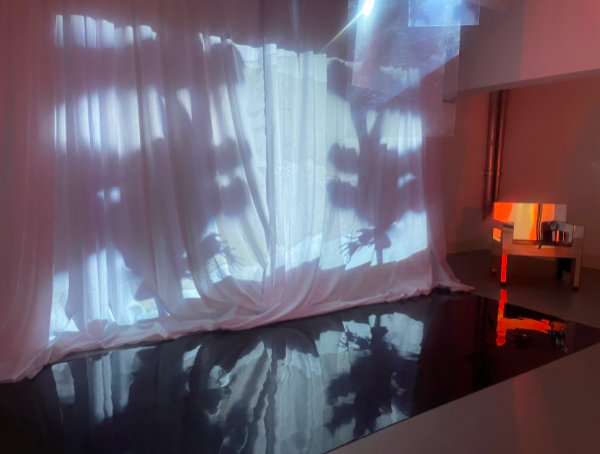 The Also Sisters’ “On the Margins of Metaxy”

In “On the Margins of Metaxy,” The Also Sisters (Sonia and Miriam Albert-Sobrino) explore liminal space through refractions, distorted images, and sound. Walking into the room where “On the Margins of Metaxy” is being displayed, the viewer is met by a large white sheet of fabric hanging across the wall. Projected on this sheet is a constantly shifting video, while hanging in front of the sheet are squares of clear plastic which reflect the images being cast on the large white sheet. Placed next to this is a wide, boxy chair made of a mirror, reflecting everything around it. On the opposite wall is a long rectangular sheet; it also has plastic pieces hanging around it to reflect its images. This rectangular video can be seen in both this room and the room next to it. The shadow of a woman arms outstretched and fingers spread glides across the sheet in constant movement. The work is unsettling but hard to look away from. It feels immersive, as if being in the same room as “On the Margins of Metaxy” places you in a liminal space somewhere in-between reality and a dream-like state.

Land Body feels fresh and relevant. Each work is captivating in its own way and reveals the variety of relationships and experiences that women have with the earth and land that surrounds them. It pushes against tradition and stereotypes on multiple levels. Male perspectives have largely dominated artists’ exploration between women’s bodies and the land. Land Body rejects this sentiment by allowing this space to be filled with women who in turn express their beliefs concerning climate change, women’s rights, Black resistance and mourning, earth’s beauty, and other ways that humans have destroyed the land we live on. Land Body celebrates earth’s beauty while simultaneously creating a space that recognizes the intersectionality of many pressing issues that plague our world today.