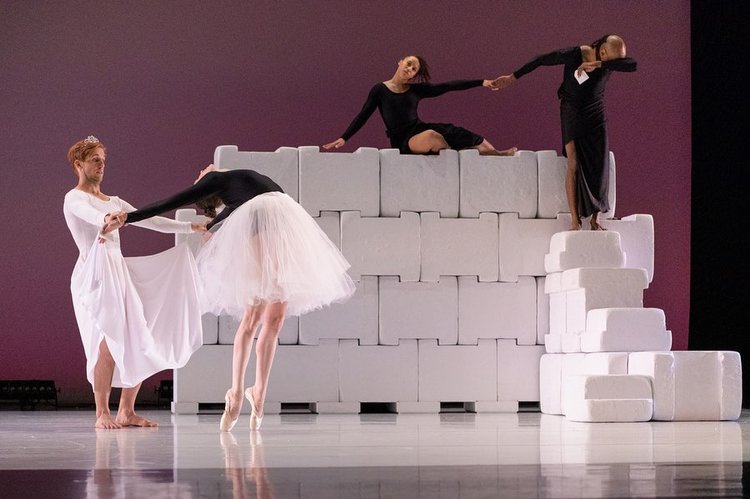 Ririe-Woodbury Dance Company’s Traces includes a sharp, stylish duet by company artistic director Daniel Charon as a prelude and Ann Carlson’s evening-length “Elizabeth, the dance,” originally created for the company in 2017. My pet word is almost always “effective” when I critically appreciate and evaluate a production. But, regarding Carlson’s astounding “Elizabeth,” I find that the words sending me to the thesaurus are related to ‘“strength” —  strong choices, strong chemistry, and an overarching strong sense of deliberate purpose.

The focal point of the opening tableau in “Elizabeth, the dance” is a modular wall of dense foam blocks, each around two-and-a-half feet square, stacked in rows of five or six. The company of six sits contemplating the blank, imposing structure. They proceed to launch individual full-body assaults on the wall, egged on by off-the-cuff verbal appraisal from their cohort. The wall gives way with a truly jarring crash and its constituent blocks are claimed, scattered, and repurposed by the dancers with intense motivation. This sequence presents a literal foundation, and also its figurative analogue. The theme is structure: obstruction, destruction, construction. These incredibly versatile blocks are later counterposed with light white balloons. Archetypal simplicity belies complexity of craft in “Elizabeth, the dance,” a textured collage of speech, movement, and sound proliferates within this elemental framework. 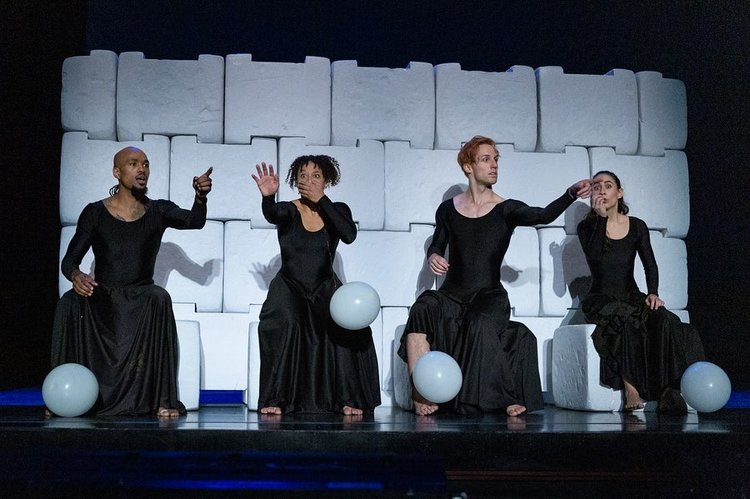 Carlson drew directly from the lives and experiences of the dancers in the creation of this work, and the dancers embody it beautifully. Ririe-Woodbury Dance Company is thoughtfully peopled with distinctly virtuoso individuals who, together, have an incredible working chemistry. Their ensemble unison in silence was especially impressive. Some singular moments and images in “Elizabeth” stand out from the piece’s gestalt enactment of human endeavor: Melissa Younker is the first dancer to fully arrest the viewers’ attention, in a series of draping poses on a block pedestal with all the exaggerated static angularity and total living force of the classical statuary figures she invokes. A recording of Bashaun Williams telling a personal story is accompanied by William’s solo movement, which, though adept and sharp, left room to focus on the utterly compelling cadence and content of the narration. The dancers emerge and reemerge from behind the wall in accumulating states of clown get-up, starkly breaking the aesthetic monochrome, and enact a furtive pants-tugging, crotch-rubbing, shiftily ambiguous probing of erogenous bits that hits the perfect note of discomfort and grotesquerie.

Other moments of note deal more explicitly with the overarching theme of dance history and precedent and its patent impact on the lives of dancers. Clad in pointe shoes and tutu, Megan McCarthy executes bravura balletic movement, only to break against human impediments and collapse dramatically to the floor. The director stops the scene to redo the fall again and again, which McCarthy accomplishes not only with wit and intensity but also the blithe, performative deference demanded of a dancer receiving vague, disparaging rehearsal notes. In another vignette, newest company member Dominica Greene speaks directly to the problematic framing of historical legacy. Greene and two other dancers ascend and descend a block, draping their long black costumes in pan-Hellenistic toga fashion and striking the corresponding languid poses. They respond warily at first to unvoiced questions about unnamed forebear Isadora Duncan. The series culminates in Greene stating that this historical figure was a racist, that she prefers personally to look to the many women of color who innovated and originated modern dance, and, in an admission of confliction, acknowledges Duncan’s contribution to the field with the certainty that Greene would have been excluded from her work. In “Elizabeth,” the treatment of modern dance as subject never feels like an in-joke. Rather, it is explicit and integral, driving conflict and inquiry.

Watching “Elizabeth, the dance” reminded me both of reading Italo Calvino’s lectures on lightness and weight and of trying feverishly to stay awake through the hippo, crocodile, and ostrich ballet in Disney’s Fantasia. It made me consider the difference between intention and objective. We are often called on to appreciate and acknowledge the intention or internal process of a performance. But it is refreshing and exciting to be swept along with unremitting craft and purpose, with the sense that each artist is driven by a strong objective in every moment, and on a path of deliberate choices. The path here terminated in an onstage popcorn party, so thoughtfully scaffolded and respectful of boundaries that I participated in it comfortably and gladly.

Ann Carlson has long-standing connections with the University of Utah and the founders of Ririe-Woodbury and has recently presented work for UtahPresents and the inaugural Dance West Fest. I fervently hope she will continue to create here in our community. 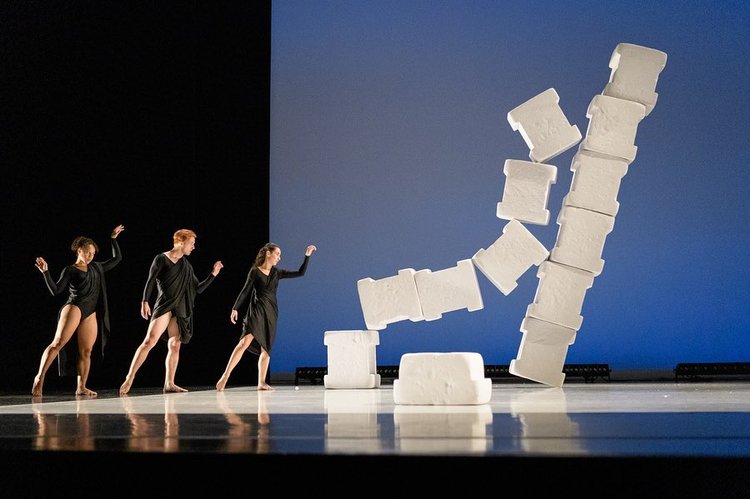 Nora Price is a Milwaukee native living and working in Salt Lake City. She can be seen performing with Durian Durian, an art band that combines post-punk music and contemporary dance.