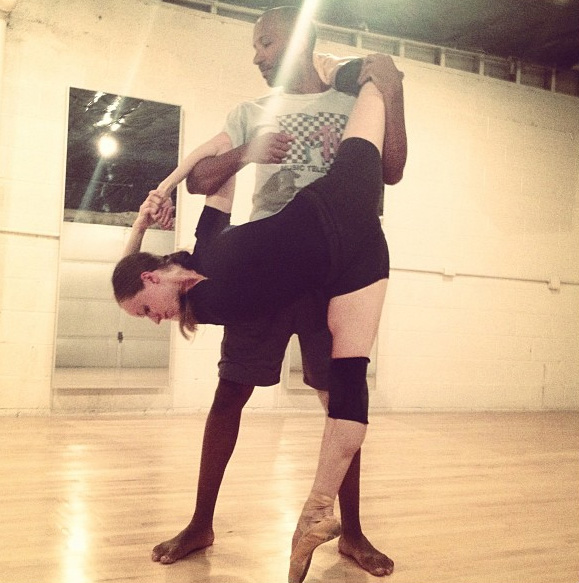 Choreographer Charlotte Boye-Christensen’s greatest fear about her new work The Wedding is that she doesn’t know enough about the subject matter. In Denmark, where she’s from, “only about eight percent of the population marry . . . so it’s not something I’m terribly familiar with,” she says. She can count the number of matrimonial ceremonies she’s been to on one hand — including her own recent union with architect Nathan Webster. The two are founders of a new interdisciplinary project called NOW, which will have its inaugural performance at the end of this month at the Masonic Temple in Salt Lake City. Webster and Boye-Christensen, who recently gave up her position as artistic director of Ririe-Woodbury Dance Company, call the group “an ambitious, fiercely contemporary” collaborative, and ambitious their plans are, if somewhat nebulous.

Revisiting her identity post Ririe-Woodbury, Boye-Christensen says that she was “sick as hell of the proscenium space,” and with this new work was excited to explore the common human ritual in the magical, if loaded, venue that is the Masonic Temple auditorium. As she fleshed out her plans, she repeatedly affirmed a commitment to abstraction, eschewing the narrative, but retaining “an emotional landscape” that comes from acknowledging “the human presence.” That said, she concedes an autobiographical element that is perhaps unprecedented in her work. Before the first show, she and Webster will be renewing their vows in the Egyptian room for friends and family traveling to Utah for the performance.

While The Wedding will primarily be a dance performance, NOW is already planning other projects that will highlight other art forms. January will see a collaboration with the theater artists of Flying Bobcat based on Goethe’s Faust and featuring puppets. Webster hopes to use the company store on their website as a way of promoting local designers and artists “in the spirit of CityHome Collective” and cities “such as Austin, Texas, or Portland, Oregon” that connect the “hyper-local” with the international. “You have to keep up your connections… or risk losing your international profile,” Boye-Christensen interjects. “That’s been [her] frustration with Ririe for the last five years,” Webster explains, and it’s a problem Boye-Christensen hopes to face while making a home here in Salt Lake.

“Eventually,” elaborates Boye-Christensen, “we want to move away from the self-limiting non-profit model,” though they are planning on getting retroactive non-profit status for the over $35,000 in donations they raised this spring on Kickstarter. The money is well needed, both because of the international range of the talent NOW is bringing in, as well as for more mundane matters — in order to stage the performance in the middle of the summer, the organization had to spend $5000 to air-condition the Masonic Temple’s auditorium.

Boye-Christensen is clearly proud of the cast that she’s hired for the upcoming production. “All of these dancers are artists that have had a profound impact on me,” she mused during our interview.  “Yumelia [Garcia, Joffery Ballet] is an astounding technician… this Venezuelan spitfire… I met in Minneapolis.” Boye-Christensen smiles and laughs at the thought of Garcia, who is barely five feet, partnering with Sleep No More alum Ted Johnson, a mature and unpretentious performer who clocks in at six foot four inches. Then there’s Ballet West’s Katherine Lawrence who recently wowed audiences in Avichai Scher’s White Noise and finally, Jo Blake. Formerly of Ririe-Woodbury, Blake is the dancer with whom she’s worked with the longest, for more than a decade. He’s steeped in her style from years of legendarily grueling classes at the Rose Wagner. He’s also one of the few professional dancers in Salt Lake City who is almost universally lauded and respected by his colleagues.

When The Wedding comes together later this month at the Masonic Temple, it will be fascinating to see how these disparate artists get paired and repaired in the final analysis. The work itself is still being created and details on it are scant. Boye-Christensen says she hasn’t really thought about the work in terms of the obvious issues implied in making a piece about marriage in Utah — such as queer unions or the legacy of polygamy — making it unclear how universal or how local the piece will be. What Boye-Christensen has accomplished so far is an achievement in and of itself. Within months of leaving her comfortable position at Ririe-Woodbury, she’s raised an impressive sum of money — and already spent a good portion of it. She has gathered a cast of dancers she admires and created a real challenge for herself. The first fruits of this work will be on display later this month. We can only hope that more local choreographers will follow her lead in taking themselves seriously enough to take such big risks and ask the public for so much support.

NOW International Dance presents The Wedding, a work by Charlotte Boye-Christensen at the Masonic Temple in Salt Lake City, July 26th and 27th. Visit their website for more information.