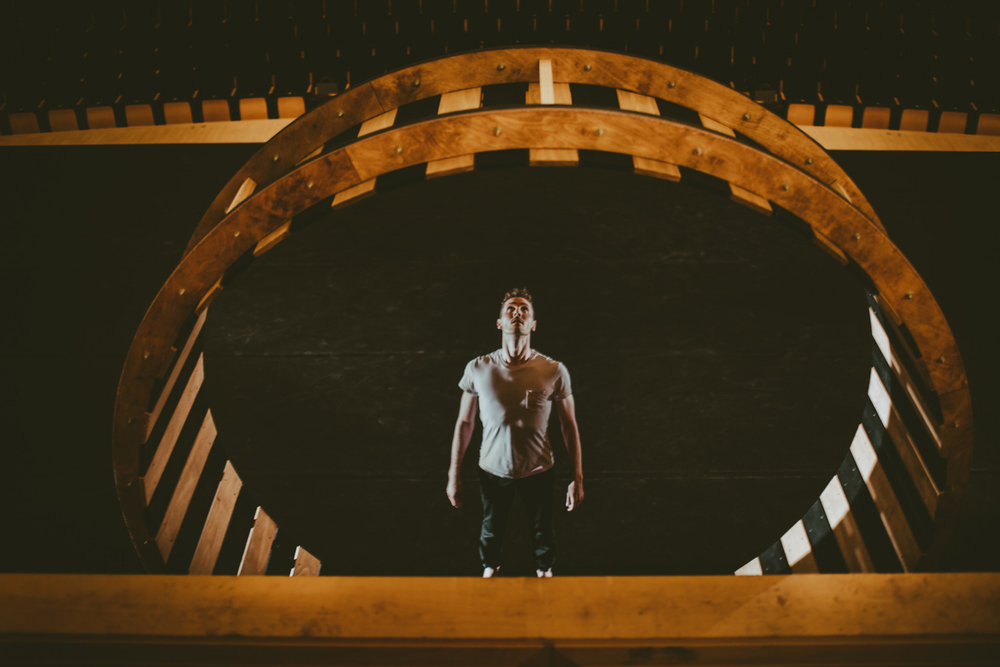 Before collaborative was compelling marketing it was embedded in the making of concert dance. In the ’30s Martha Graham worked with Isamu Noguchi on Frontier and he went on to design the seat for Appalachian Spring. Merce Cunningham, who performed as “the Revivalist” in that work, went on to have collaborations from Andy Warhol’s pillows in RainForest to scores by Sigur Ros and Radiohead for Split Sides. More traditionally, classical ballet drops were hand-painted and music was carefully designed to house its movements. In these unspoken veins NOW-ID stakes its claim.

It’s true that Artistic Director Charlotte Boye-Christensen’s serious and sharp aesthetic is reminiscent of Graham’s more narrative work and her presentation of Jesper Egelund‘s songs is as magnificent as any ballet orchestra. But NOWHERE also identifies a divergent nature to contemporary collaborations; in the program you won’t only find thanks to cultural partners but logos for hair salons and magazine marketing agreements. In this shift the group finds success, mobilizing outward from audiences attending dance mostly because they are themselves dancers. The resulting evening is met with enthusiasm and projects a think-tank sensibility if a more slick veneer.

NOWHERE begins with Jesper Egelund and Laura Cutler seated symmetrically atop the concert hall frame and highlighting a human-sized hamster wheel. Their music opens space for a duet between Tara McArthur and Brian Nelson. From the moment McArthur enters, choreographic ideas of freedom through restraint are perfectly clear. Her performance throughout provides a haunting meditation on how we fast we might arrive in a moment only to vanish as quickly.

NOWHERE continues shuffling duets and solos alongside brief video from Adam Bateman’s walk home on the Mormon Trail. Bateman also joins the moving action as “The Walker” formally partnering an en pointe with Katherine Lawrence across the stage and relieving expectations by running on the wheel near the end of the work. With six exterior silver seats, the audience can guess just how many mathematical possibilities there might be between the performers which allows our predictions to dissipate, finding enjoyment in watching the action unfold.

Some duets have topical tension about how we arrive and navigate elsewhere. In others a stylistic tension develops between varied performance modalities. Katherine Lawrence is fiercely capable of technical command but some degree of vulnerability seems choreographed out of her reach — an opening chest, a fluid fall, or other liberated idioms. Perhaps this is engrained into the very idea of difference, something inherent to an exploration of place. Yet it’s likely that the company model of periodic convergence is related. With half of the performers arriving a handful of weeks prior to NOWHERE, a lack of time finds its way to the surface. There is certainly magic in a serendipitous moment: the muscle memories of McArthur and TJ Spaur inside crisp partnering, the knowing of Adam’s walking body, the space temporarily losing NOW’s signature blue light in favor of floods of red. But there is enough possibility resonant that further sifting of the material seems not only warranted but desirable.

Ashley Anderson directs loveDANCEmore programs as part of her 501c3 ashley anderson dances. She shares her writing here on 15 BYTES where she is the dance editor. In the spirit of full disclosure she is friends with Tara McArthur and is extremely jealous of Katherine Lawrence’s badass post-partum performance.