“Now it belongs to the people”: Juan Pablo Gasca at Charley Hafen Gallery 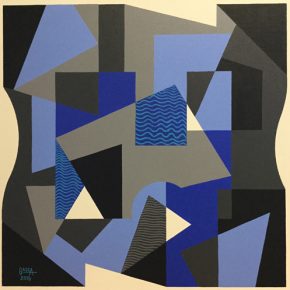 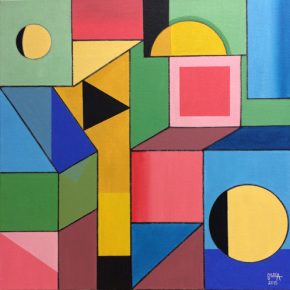 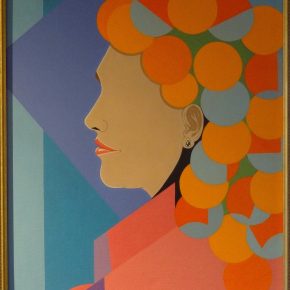 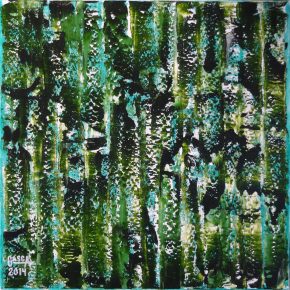 A small oil, less than a foot square, says a lot about the man who painted it. Juan Pablo Gasca, who was born in Guanajuato, Mexico, but has made his home in the United States since 1998, calls it “What Do You See?” The title is no joke; rather, it speaks to the artist’s conviction that what a painting means to the person contemplating it is as significant as anything the maker may have intended. He understands that in an important way, once a work of art leaves his studio, it no longer belongs to him. “Now it belongs to the people,” he says. But “What Do You See (No. 2)” also makes a statement about the ultimately abstract nature of all art. Painted in several greens and black, from a distance it makes a strong visual impression that might be bamboo, a forest, or wet fish scales glistening in clear water. Yet, on moving closer to see for sure, the vertical stripes alternate between lying flat or becoming tubes, but in any case are tactile veins of optical data, and finally, paint marked by scraping with a palette knife.

There are as many kinds of abstraction as there are representation, and Juan Pablo Gasca has experimented across the entire spectrum since, as a child, he began to obsessively draw the animals near his home. Guanajuato is home to celebrated cultural events, among them giant public murals and the Cervantina—the international festival celebrating Don Quixote—which bring artists from around the world. But in the 1970s, an indigenous school of art called Mexican Geometricism appeared among the poetry, masks, and other indigenous forms of expression. Although Gasca wasn’t even born when Geometricism was in its heyday, the examples he eventually came across made a lasting impression. The approach to painting he eventually settled on owes much to the fundamental, suggestive, and even fantastical geometric forms that gave so much 20th-century art a permanent sense of belonging to the future, rather than the present or past.

According to meme theory, certain ideas (or memes) spread like the genes of more competitive plants or animals, traveling from person to person until everyone has thought them. Thus such notions as “photographs prove nothing in the age of Photoshop,” or “a celebrity is someone famous for nothing more than being famous,” or “a wealthy politician is more trustworthy than a poor one,” each achieve seemingly instantaneous acceptance, regardless of how well they are understood by their hosts. An early, readily-apparent example in art history has to do with Modernism and the perennial avant-garde. Because the best art after 1850 was new work that broke decisively with accepted practice, the connection between quality and being new and iconoclastic soon replaced the previous understanding that art could become better without needing to be all that different. One effect of this meme’s general acceptance has been that the 20th century, one of the richest periods in art history, is littered with wonderful aesthetic inventions that were abandoned before they could be carried through. Some achieved a popular afterlife in spite of mainstream abandonment: Impressionism lasted a little more than a decade at the apex of attention, but hangs on— among amateurs and illustrators—as the most popular style ever.

So it is that Juan Pablo Gasca recalls the exploration of two- and three-dimensions that began with Cubism in the years before World War I, lost momentum during the war and the Dada and Surrealist movements that followed, but remained influential and eventually became accepted as the last major development in the language of traditional art. One of its most successful proponents, Fernand Léger, gradually added figures and urban scenes into his Cubist constructions and became a major influence on Pop Art. In the 1950s, Cubist-influenced architecture, somewhat facetiously known as “Boomerang Modern,” along with forms influenced by Alexander Calder’s mobiles and stabiles, were staples of textile and interior design. It is these engaging and entertaining offspring that are reincarnated in Gasca’s playful style, with its prominent geometric statements and luminous colors.

The central role of color is revealed by many of Gasca’s titles: “Untitled: Purple, Gray, and Yellow,” “Blue, Gray, and Black Composition,” “Arreglo en Color Púrpura” (Arrangement in the Color Purple). Colors are the keys on which an artist composes emotional responses, and in fact abstraction’s great claim on art is its immediate accessibility. Its content is whatever feelings it awakens in response. The secret to human thought is the mind’s ability to constantly draw abstractions out of the concrete; then abstract those abstractions further. One result is versatility: a pair of Gasca’s landscapes each features a plump bird next to a sinuous tree, while “El Caracol” (the snail) is confined to pure geometry. “Portrait of Lucrecia” reduces the sitter to an anonymous and indeed generic figure in order to emphasize her lips and earring.

Ultimately, what best conveys Gasca’s sense of joy, of the pleasure he takes in painting and that he wants his audience to find in viewing, is the three-dimensional playground that spills over many of his best works. A piece like “Blue, Gray, and Black Composition,” with its dancing, wavy lines and intermixture of sky and water, plays havoc with the inherent neurology of perception, so that what is solid here is suddenly porous there. Juan Pablo Gasca’s power is to make this look easy, but in fact anyone who has tried to paint such diabolically fluctuating fields knows how hard it is to find dynamic balance in them. “Personaje,” meaning person or character, is a distant relative of Picasso’s harlequins, clowns, and musicians, but with the human attributes replaced by angles, boxes, and forms that look solid on one end but become flat, though anything but colorless surfaces on the other. Here reading the tantalizing surface isn’t a step along the way to some higher purpose. Instead, seeing is the whole point.