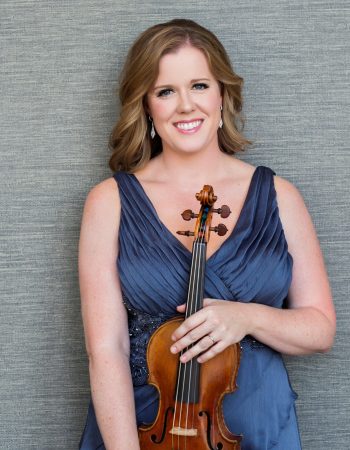 NOVA’s new music director Madeline Adkins has been performing Schoenberg’s Transfigured Night since she was a child, photo by Cassidy DuHon

As Barry White will tell you, love ain’t easy (and seems to be getting more complicated). So the idea of sitting down to an evening devoted to a musical love letter, written a century ago by a young composer for the woman who would become his wife, has its appeal. Arnold Schoenberg wrote “Transfigured Night” in a three-week surge of creative energy after meeting Mathilde von Zemlinsky, the sister of his friend and teacher, Alexander von Zemlinsky. The romantic one-movement work, the first piece of program music for a string sextet, was met with hostility at its premiere but has become one of the composer’s best-known works. It is the focal point of NOVA Chamber Music Series’ season opener.

NOVA’s new music director, Madeline Adkins, a violinist and concertmaster at the Utah Symphony, has planned a 2018-2019 season that includes: an evening of British composers; music dedicated to nature; an exploration of the intersection of jazz and classical music; a world premiere by August Read Thomas; the return of Andrew Norman; and an evening in which a pair of dancers interpret Gity Razaz’s ballet “Chance Has Spoken.” But she begins the season with Schoenberg’s love letter.

Adkins says it has always been one of her favorite chamber music works. “I’m the youngest of eight kids, six of whom are string players, and this was a piece we performed frequently, and that we also recorded. It’s such a ground-breaking pillar of the repertoire, and I thought it would be fascinating to explore the influences that led Schoenberg to this work.”

These influences include the string writing of Schubert (represented by the Quartet Movement in C minor, D. 703) and Mozart (whose Sonata for Piano and Violin in E minor, K. 304 was composed as a tribute to his mother as he mourned her passing). Adkins says she was drawn to these works in particular “because the mood is quite melancholy” and the minor-key writing increases the works’ expressive possibilities.

One of Schoenberg’s greatest influences, Brahms, is represented by Two Songs, Op. 91, a pair of works for alto voice with viola and piano, set to poems by Friedrich Rückert and Emanuel Geibel and designed as a wedding present for two musician friends.

The most interesting of the relationships, however, is Zemlinsky, whose “Fantasies on Poems by Richard Dehmel” goes to the same source as Schoenberg and was written around the same time. The four intimate piano pieces are inspired by four poems by Dehmel, a contemporary expressionist poet whose work “Woman and World” had him tried for obscenity and blasphemy and attracted the attention of Zemlinsky, Schoenberg and other composers.

For his sextet, Schoenberg focuses on an individual poem to create a work of German romanticism unlike the later compositions for which he would become known. “A lot of people who are more familiar with Schoenberg’s later periods, such as his 12-tone compositions, are surprised that this lush, glorious work with soaring melodies and such beautiful harmonies are from the same pen,” says Adkins.

She says the poem the piece is based on is equally compelling. In Dehmel’s 36-line work, two lovers walk through a dark wood on a moonlit night when the woman, with a sense of trepidation, reveals a secret: she is pregnant with the child of another man. The man hesitates as he reflects on the confession before literally and figuratively embracing the woman, and her unborn child. The music follows the psychological tensions suggested in the poem, moving through fear, regret, calm and acceptance. “Schoenberg really writes six equally important parts that intertwine and trade off so masterfully,” Adkins says.

The charged nature of both the writing and the music earned the work a hostile reception when it was premiered. But if we see it as a coded declaration of love, it worked. He and Mathilde married, raised two children and were together for 22 years until her death from cancer.

And those who want to enjoy the story in that form, to luxuriate in the sounds and the idea of love, who want to think of the happily ever after, will want to skip the following coda:

When Schoenberg married Mathilde, he lost most of his social circle, who disapproved of her. He rebuilt a new one, which included a neighbor, the expressionist painter Richard Gerstl, whom the Schoenbergs invited into their home to teach them painting, and who became a friend of the family. Until Gerstl had an affair with Mathilde. When Schoenberg confronted his wife, she chose to abandon the family. When she was finally persuaded to return, Gerstl responded by setting his studio on fire and hanging himself. Schoenberg was just finishing his second string quartet, which gave birth to atonality.

Because, love ain’t easy. Nor is art.