Nostalgia for Art & Artists Past

by Shawn Rossiter and Kasey Boone

Remember the Olympics? Everyone thought we’d all get rich. Instead, turned out that all our international visitors stayed within a four block radius downtown to drink beer and go to parties. Go figure. 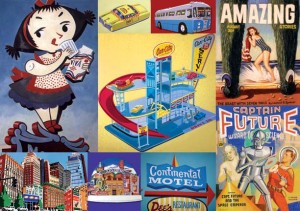 Though most of our guests didn’t get a chance to see them, a couple of shows during the Olympics featured a broad range of Utah artists. 15 Bytes awarded its own “Gold Medal” to one of these shows, the UtahArt 2002 exhibit in Salt Lake City. Well, this month, New Visions Gallery has held a class reunion for the artists who participated in the 2002 exhibit. Don’t worry, they haven’t dusted off the 2002 works and brought them out (though we wouldn’t mind seeing some of those again). Rather, the artists in the original exhibit have contributed new works for this show. What is impressive about this show — and about the original — is how vibrant, accomplished and just plain interesting the Utah art scene is shown to be. From the abstract work of Lee Deffebach to the detailed landscapes of Clay Wagstaff. From the flashy details of gears by Ani Heinig to the photographic montages of Edward Bateman and David Dornan’s paint-splattered paintings of paint-splattered rooms, — 2002 Revisited is a testament to the breadth of work available in Utah. Make sure to stop in this week to check out the show. Contained in one room you’ll see why many of us choose to remain in the relatively small and isolated Utah scene.

For nostalgia of a slightly different nature, visit the Patrick Moore Gallery (511 West 200 South) for Paul Heath’s exhibit, Pop (& Pulp) Nostalgia. Heath’s exhibit is a rollicking reminiscence through the pop world of the 1940s and 1950s. Pulp fiction posters, skyscraper cityscapes, the iconic taxis, buses and pop paraphernalia of a by-gone era — Heath pays homage to them all. Heath is in love with the Salt Lake that used to be, and gives its landmarks as much devotion as other artists might give to New York or Chicago.

Heath’s exhibit resembles that of Allen Bishop‘s at the Rose Wagner (see last month). He has pushed the concept of painting by assembling works out of multiple pieces of wood. His pieces are both two-dimensional paintings as well as three-dimensional relief pieces. They are the pop realism of Bishop’s abstraction. A 3-D Construction of downtown Salt Lake City is combined with a Pollock-esque backdrop in “Downtown Lavender from ‘Lost Pollock’ Series.” In “Siena Diorama” he does something similar with the Italian hilltown, using painted wood and colored glass as the “sky” element of the work. Heath even creates a couple of his pieces out of painted tiles, grouted together.

If you missed the May Gallery Stroll, or are going to be out of town for June’s, but still want to rub shoulders with other art patrons, then try the Rockwood Art Studios quarterly Open House going on this weekend, June 3rd and 4th. Located in Sugarhouse, the Rockwood Studios is home to over twenty artists as well as a few galleries. During the open house, most of the artists have their studios open, their food on hand and their art ready to sell.

Looking forward, you might think that during the summer things would be slowing down, but this is certainly not the case. One of the big events of the June stroll will be the Trevor Southey exhibit at A Gallery in the Foothill area. Southey, a native of Rhodesia and former BYU professor, has a national reputation and a loyal local following from his years in Utah before moving to the San Francisco area. He has an exquisite ability to capture the human body and integrates his classically inspired figures with contemporary elements of design, collage and paint application.

The Patrick Moore Gallery will feature the Galls Art Guild’s second annual “A Gathering of Glass.” It’s not a reunion tour of the Dale Chihuly glass show from the Olympics, but the luminous quality of the glass on display will still delight.

For a complete guide to what will be up at the next Gallery Stroll, browse through our UP and UPCOMING listings and visit www.gallerystroll.org later this month.