Nor Any Drop to Drink: William Lamson’s Hydrologies at UMOCA 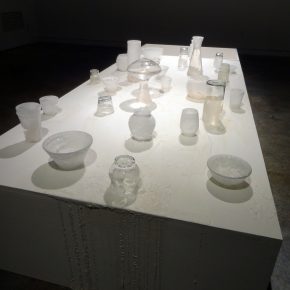 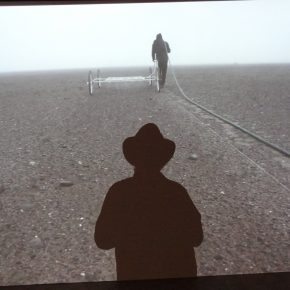 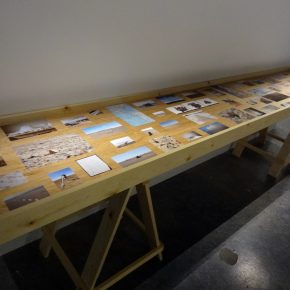 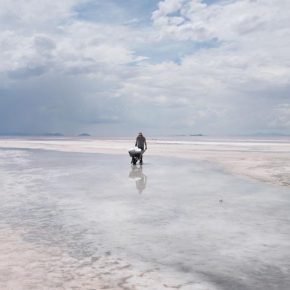 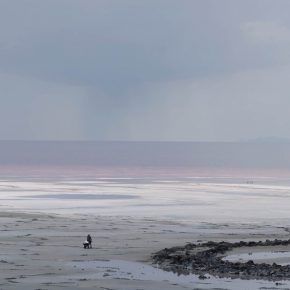 Water is one of art’s great subjects, and why not? One of four indispensable elements known to the Greeks, it’s the one that comes closest to being unique to our planet. Water makes life possible, but also shapes and even transports it. We know far more about water now than we did in the years between 1798 and 1817, when Samuel Taylor Coleridge re-channeled the course of English poetry with Rime of the Ancient Mariner, his longest poem and clearest announcement of a new, Romantic understanding of the human relation to nature. Almost exactly 200 years later, we are once again struggling to bring into focus yet another view of the natural world: one in which we are part of, rather than opposed to nature. Where Coleridge focused on its sublime power, we are becoming aware of its limits, and ours. A scientific illustration, meant to clarify how precious this resource is, shows Earth as a dry, brown sphere, on which three progressively smaller blue drops represent all the planet’s water, all its fresh water, and all its potable surface water. It’s a disturbing image that represents one vital and indispensable kind of knowledge. Another way of knowing water—more intimate, more palpable, if no less inexorable—can be found in the art of William Lamson, whose Hydrologies have taken shape over several months at UMOCA and elsewhere.

It should come as no surprise that the involvements of water are manifold and complex, intersecting physics and physiology in ways both great and small. One of nature’s great laboratories for its exploration appears to be coming inevitably to an end a few miles from the gallery. Here one of perhaps 20 seas that together cover 71 percent of the Earth’s surface is about to disappear after millennia of gradual shrinkage. Like a handful of such bodies of water—the Dead Sea, which is also called the Salt Sea, and the Aral Sea come to mind—the Great Salt Lake demonstrates a key fact of hydrology: as seas evaporate, their salts remain behind, concentrate, and take on a new, sometimes metaphorical and sometimes actual life of their own. These phenomena are the subject of “Hydrologies Archaea,” the artwork Lamson made at UMOCA in collaboration with saltwater drawn from the Salt Lake. A production still shows a man wheeling a load of something white past something that looks like a loop of Spiral Jetty, another project drawn here by the presence in the lake’s water of microorganisms that turn red at precise saline concentrations. Part of “Hydrologies Archaea” involved transporting water from Rozel Point, site of Spiral Jetty, to the gallery, where Lamson used it to fill a variety of clear glass vessels. As the water evaporated, he observed various phenomenon, including one in which residual salt appears to be alive, climbing up and over the sides of the vessels, eventually spreading across the table on which the bowl, jar, vase, or whatever sits. Although Lamson maintains a rigorous scientific attitude in his descriptions—and indeed, the actual chemistry and physics of the phenomenon are worth understanding—witnesses would have to be willfully insensitive not to notice how the spreading crystals invoke a plant or animal population desperately searching for its disappearing source of water. When the evaporation process is complete, the various containers are transformed into beautiful, translucent white forms, like bones covered with dry light where once they knew liquid luminescence.

Near a table covered with such glassware and the salt crystal planes that spread from them, even spilling down the table’s sides, a rough trestle set on triangular legs holds photographs and research materials from this project and others conducted in Wendover, Long Island, and Chile. This last was the site of “Hydrologies Atacama,” in which Lamson explored the potential for reversing the process of dehydration and heading off the disaster that confronts those who depend on water. The Atacama Desert is said to be the driest place on Earth: a blasted plain on most of which nothing grows. Or, grows often: there is a difference between a place with no rainfall, a virtually unknown predicament, and one with periodic, sparse rainfall. And there exist living things all over the world—not just plants, but animals—that take advantage of periodic rain by lying dormant during dry spells, returning to active life after it finally does rain. The organisms responsible for the red tide that attracted Robert Smithson to Rozel Point can remain inactive, trapped in salt crystals, until revived by water, and so can tiny plants hardly bigger than the sand grains of the Atacama. Lamson was able to demonstrate their existence by irrigating a strip of the desert during a year when the occasional heavy rains that truly make the desert bloom didn’t appear. He also filmed the procedure whereby he watered the desert, and that film is the centerpiece of this exhibition.

In 1857, Jean-Francois Millet exhibited “The Gleaners,” a painting as controversial in its day as the adequate supply of clean water is today. In it, the figures of three women, stooped to gather harvest remnants left behind by commercial farmers as too petty to recover, proceed across and into the painted scene. William Lamson recalls this provocative procession in his filmed trek across the desert. Here a custom-built, wheeled vehicle rolls slowly across the field of view, followed by a team of men walking at a formal, funereal pace. They shoulder the burden of a hose carrying water from an unseen source, trudging behind the machine they supply as if roped together for common safety. In another installation, say one where the video was seen on a monitor, this image alone would make it almost overpowering. But as installed at UMOCA, something far more moving occurs: the viewer enters the projected scene in the form of a silhouette, like the shadow portraits of centuries before the coming of the camera. First, the witness becomes a shadow spread across the soil, or a dark figure standing among dried stalks as much as a decade dead. We are implicated: this is not just a distant landscape of no matter to us, but our world dying of thirst. And then, as the crew comes through, bearing their burden of water, viewers find themselves among them. The implication, subliminal but accessible to reflection, is that like any true work of art, this one includes us in its purview.

As a critic, I don’t hold that art should preach, or—unless words are its medium—try to convey verbal content, let alone a message. Unlike many misguided installations, William Lamson’s art doesn’t approach us that way; in fact, it doesn’t approach us at all. It stands apart, an open record of events and experiences, and draws us closer in order to explore it. How far a witness ventures into its defamiliarized spaces, with their crusty white surfaces, scant water, and images of vast, parched earth will depend on her curiosity, or his willingness to see beyond popularly approved vistas. Lamson’s visions have that most dire, most threatening quality: once seen, they cannot be unseen. Once taken in, they will not be forgotten. It is this visual power that makes them art, and makes Hydrologies one of the most convincing aesthetic experiences on tap in our place and time.

William Lamson: Hydrologies is at the Utah Museum of Contemporary Art through January 15, 2015.