No Ideas But in Marks: The Old-Fashioned Virtues of Gary Komarin, at Julie Nester Gallery 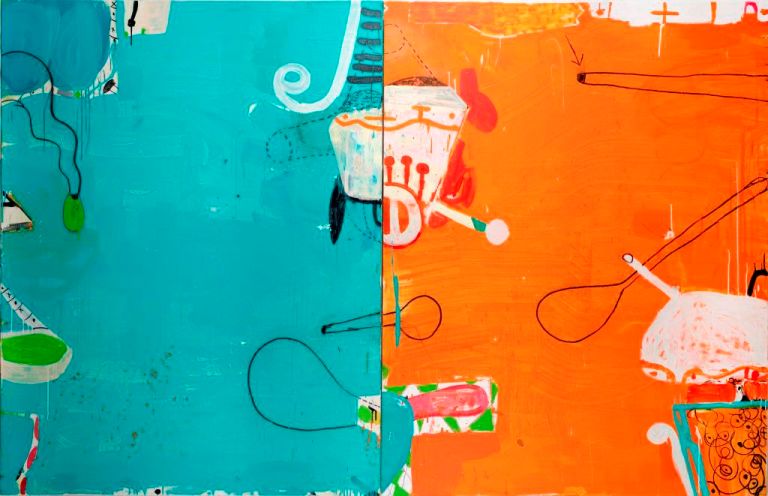 Less than a century ago, Abstract Expressionism brought the United States squarely into the dramatic center of world art for the first time. Pollock, de Kooning, Kline, Motherwell, Mitchell, and their peers formed the spine of a reinvention that evolved from the earlier revolt of Picasso, Matisse, Miro, Gorky, and so forth. The 20th century saw art’s children, for a change, devouring their parents, and so by the time Warhol, Winters, Johns, Basquiat, and Gary Komarin had taken their turn at reinventing the wheel, the justification for a permanent avant-garde was looking wobbly at best. Komarin, one of few remaining exponents of that foment, has deep sympathies with every one of these artists, having absorbed their influences, exhibited alongside them, and shared their critical attention. Yet for all they have in common—loyalty to history, commitment to the new, belief in freedom from expectations—Komarin now stands almost alone for his continuing dedication to the potential of concrete art, which on this side of the Atlantic we like to call pure abstraction.

To that end, Komarin brings neither narrative nor representation of nature into his art directly from the world outside. Looking at any of his paintings, one sees evidence rather of a direct treatment of paint as a material that can be manipulated without thought to copying any visual system. The best metaphor is surely play, as broad, relatively careless (and “thoughtless”) brushstrokes move across and up or down the canvas—those terms meaning nothing except to distinguish an end-to-end stroke from the one laid alongside it. To invite contingency into this work, he courts accidents: exploiting salvaged tarps for canvas; opening an anonymous can of paint and finding out what color a new work will be; painting on the floor to disorient his efforts from the traditional location of a painting on the wall, as well as from gravity. In order not to conceal his journey or its point of origin, he makes no effort to hide the steps by which his discoveries emerge. The viewer can, and must, see visually palpable layers accumulating and jockeying for primacy within a cerebrally induced but inescapable three-dimensional space reborn from baroque glories and achieved as if for the first time. Still, his art retains its original sense of mystery, while spontaneity permits it to remain fresh and alive. A Komarin makes no effort to hide how it came about, and what might be mistaken for false starts and altered intentions instead reveal themselves for what they are: necessary and inevitable steps on the way to knowledge and now. Thus a finished work may feel complete, but it never feels completed. He knows the right time to pause, like the moment in an individual life when it feels right to savor achievement. But there is always a sense that he could take up the brush again: that the painting, like a life well lived, could, if allowed, go on evolving into the future. Not a mere memory of the artist’s experience, we join him in the midst of an ongoing event.

We know this painting is spontaneous, engaged, and reveals an artist more interested in what comes about than in some specific goal and plan he never made in the first place. It’s not just play, but to the extent he can manage it, it’s child’s play. The recollected, dream-like objects that pop up seemingly at their own will—pots, purses, boats, hats, wigs, and ever and again, cakes—grow out of deep roots in a child’s memory and its often indistinguishable mirror, imagination. At the same time, Komarin survives from an age when giants strode the gallery: two-fisted competitors who vied for recognition of the quality of their work, not its price. His belief in the subconscious direction his process provides argues that he has privileged access to it. This is art rising—or descending—to the level of autobiography, even if the maker can’t always explain it, even when it goes against fashion, even after the work and the life part company.

I enjoy finding landscapes of unknown locations here, domestic interiors and exteriors, insides of imaginary spaces that are open to the eye without the forbidding surfaces of Abstract Expressionism, wherein Komarin has captured the energy and evidence of creation, even while hinting at the effort necessary to control it. Then, when a painting begins to fight for itself, to push back against all efforts to control it, one agrees with what the painter must feel: that it may be strong enough to survive as a new thing in the world. 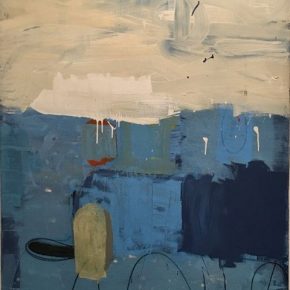 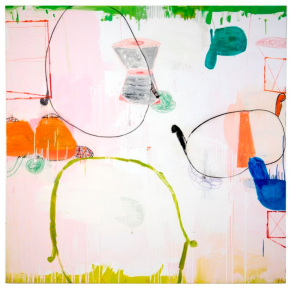 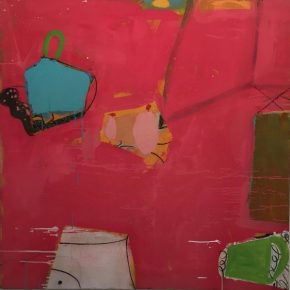