Nino Yuniardi Serves Up Visual Confections for a Weary World 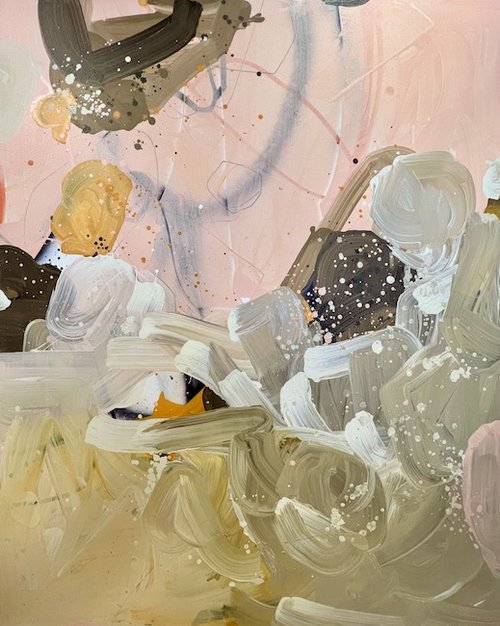 One title, “Coffee Cake with Salmon Cream Cheese,” conjures in the mind’s eye a painted plate, an appetizing dessert, whether on a breakfast table or an inviting café setting, a sweet slice of crumbly baked goods supporting a thick layer of creamy pink frosting. Instead, though, while there is pink, it’s a translucent cloud of that color that generates a surprisingly convincing feeling of open space, which separates a mysterious, circular figure in the distance from a scuffle of white-capped, beige swirls piled up in the foreground. This large painting, which contrasts giant brushstrokes with carefully delineated details, offers confectionary visual delights aplenty, but the title over-describes them.

During the week of the current shows’ openings, Doug Nester, co-owner of Julie Nester Galley, expressed cheerful enthusiasm for Nino Yuniardi’s paintings, both the works themselves and the titles, which are light-hearted and lively. In other words, they are doing what titles are supposed to do, beyond distinguishing one work from another for discussion and catalog purposes. Their major role is as shorthand, as a hint to how the work should be approached. That does not mean, though, that Yuniardi signals with his swaggering titles that his work is inconsequential. Quite the opposite. Far from triviality, he might well argue that his proffered evocations of shared food are every bit as useful, perhaps even more helpful, than the more numerous expressions of social and environmental distress being done by other artists. Food is, after all, more immediately important than art. But beyond its role as bodily sustenance, food has always been shared for the emotional value of the sharing, which is an act of indispensable importance to society. So what’s on offer in the gallery is not just some extremely skillful paint handling. It’s also an alternative to the trolling and doom scrolling that have taken over so much of life before and during the pandemic. 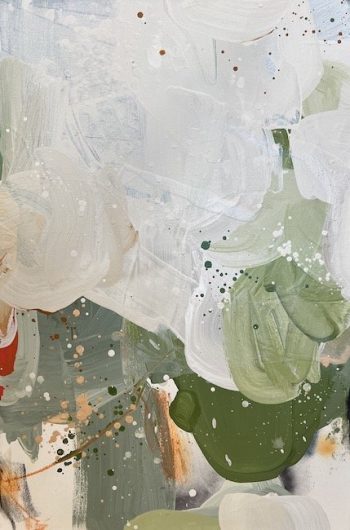 Take, for example, “Spring Salad with Tomato Puree.” Acrylic paint offers the artist easy access to several ways of painting that traditional oils do not. Because it can behave like water, it can be flung and spattered, resulting in the braille-like dots of white paint on top of the green on the right and the pink-on-gray on the left. Since acrylic also dries quickly, it can be laid down in layers that remain palpable even when overpainted. Comparing the actual texture of the white at top with the illusionary texture of the greens and grays sets up a visual depth that the spattered dots bring to life. The human eye, possibly the most sophisticated visual apparatus ever, is constantly on the lookout for clues to depth, age, and history; Yuniardi’s canvases supply a plethora of such information, arranged so as to deliver a pleasing sensory experience.

Bad news can galvanize its recipients into action, but too much bad news can rob them of the will to act. What Nino Yuniardi offers is a place to nourish and replenish the eye and mind. If an “Avocado Shake with Chocolate Sauce” sounds refreshing, and the painting that shares its name renews someone’s appetite for life, don’t we all have use for it? 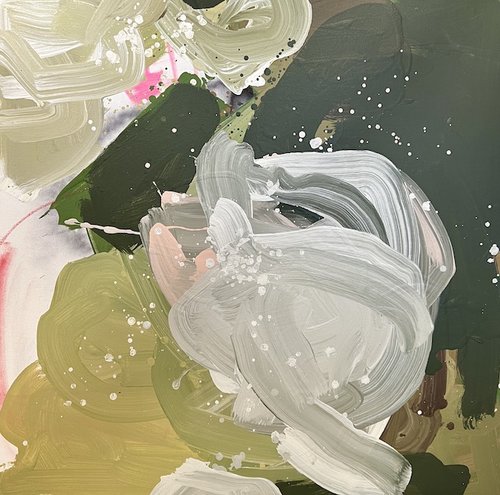