Nicole Woodruff and Hilary Swingle’s Experiments in Identity and Adventure 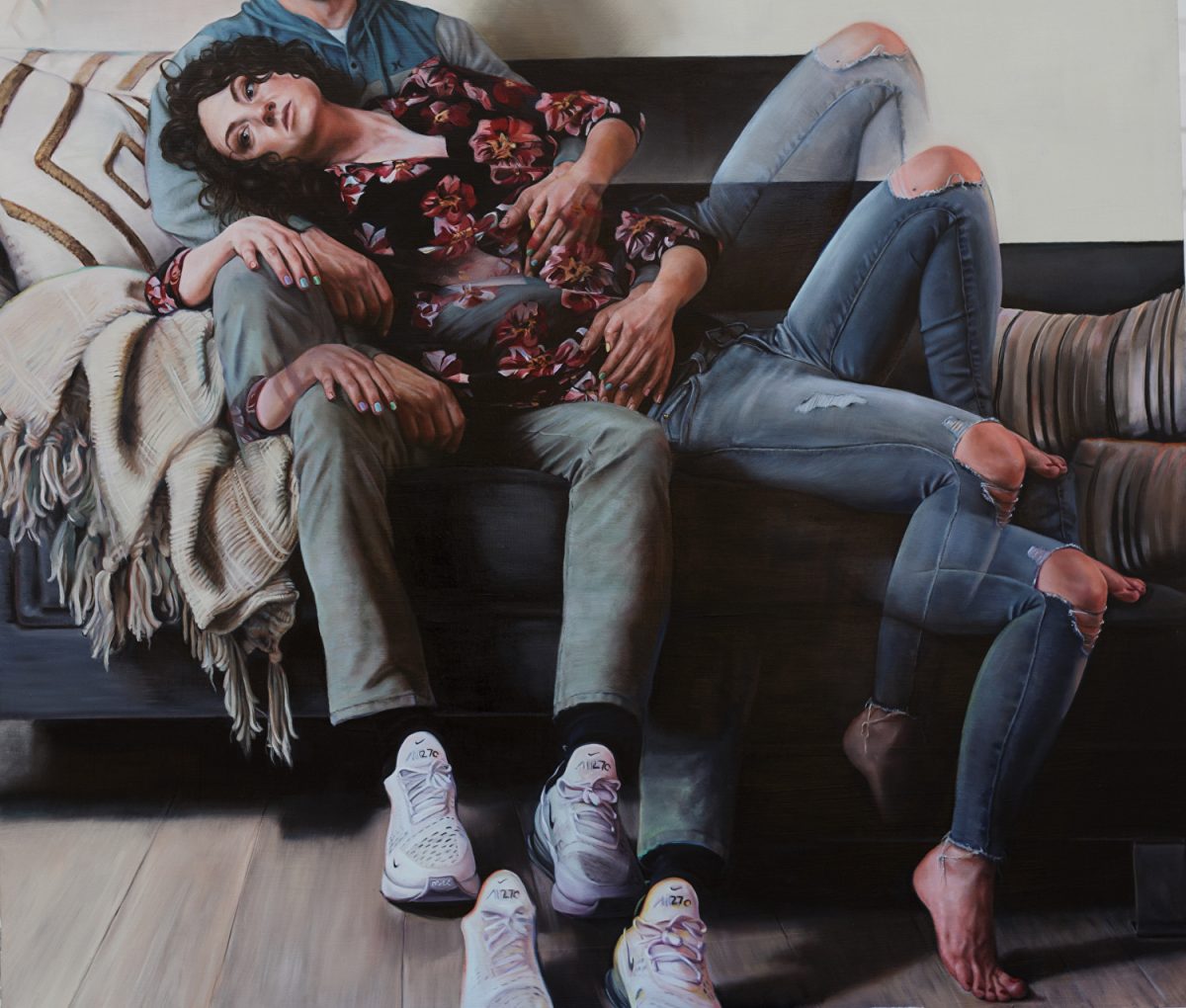 “Everything is Gray,” a photo-realist oil painting by Nicole Woodruff, doesn’t resemble an ordinary photograph; it looks like a camera error, a multiple exposure in which the same couple, the man sitting on a sofa and the woman reclining across both the couch and his lap, are seen three identical times, each iteration displaced slightly from the others, as though the camera had moved twice during the exposure. Some regions of the image are opaque, while other details are transparent: one visible through the next. Spend a few moments studying it, though, and the artist’s intervention becomes apparent. Nothing actually appears more than twice, and the repeated details have been carefully selected from the data surrounding the woman’s face, which occurs only once. The man’s face doesn’t appear at all, and it’s finally clear that it’s a study of her, and of an uncomfortable state of mind. I’m not a doctor, though I know that depression is always more common than we realize, and often hard to spot. This, however, looks to my layman’s eye like it might be the portrait of persistent anxiety.

What appears to be the same woman, right down to the holes in the knees of her jeans, poses alone in “Centered,” another triple exposure that Woodruff meticulously edits to produce not, finally, a photographic effect, but a psychological truth: this time not a diagnosis so much as an alternative state, one that speaks to wariness as a form of strength and good mental health. Suddenly, the blending edges suggest not so much a troubled state of mind — where everything is gray — but an image over time of shifting feelings that come and go in response to factors both personal and in the environment: feelings alleviated by the experience of being centered. 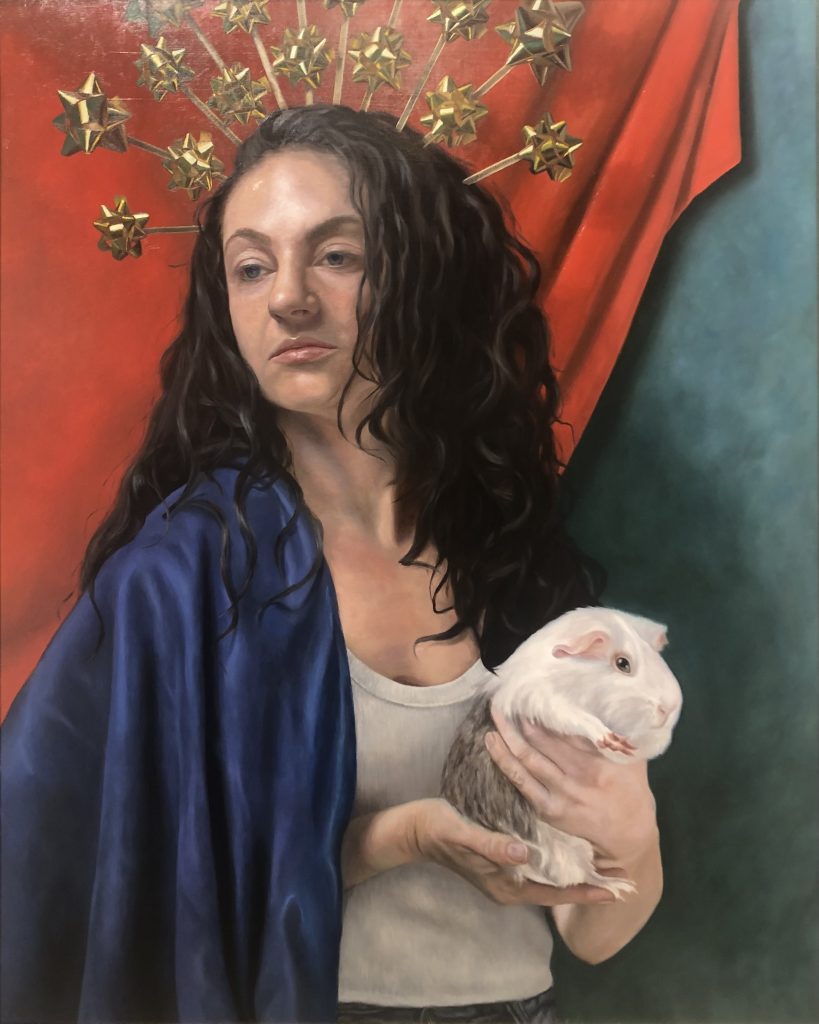 Hilary Swingle, “Nicole with a Cavy”

That said, apparently the same person appears in a third painting … by a different painter. Hilary Swingle, not just a friend of Woodruff’s, but her companion in this exhibition, presents her friend in “Nicole with a Cavy,” in which the same woman poses with a halo of gift bows and a South American rodent, probably a guinea pig. Uncertainty arises from the simple fact that this individual is being presented, first of all, by two different painters, who, more importantly, are using her in essentially different ways. For Woodruff, she’s a model, standing in for any of many qualities. For Swingle, she’s a portrait subject. In the former case, the artist is free to use her (her own self, it’s now apparent) in any way she pleases. In the second, notwithstanding Picasso’s apologizing to Gertrude Stein because her portrait would not look much like her, an artist is usually obligated to a certain level of veracity.

No doubt there are those in the this show’s audience who will have recognized immediately that each artist has contributed seven images based on herself (not necessarily “self-portraits”) and one portrait of her co-exhibitor. There are surely even some who know them, since both live and work in Utah. For me, the adventure of discovery will always cause me to go first to the art, and only later to the text, the internet, and in this case, Instagram, where both have strong presences. And when it comes to art, not knowing is what keeps it interesting. There’s a painting by Swingle on Instagram (not present at BDAC) that depicts a woman standing in front of the Salt Lake — when it was still Great — and perhaps due to my prosopagnosia, I’m unable to be sure if it’s Woodruff or Swingle — or someone else entirely. Face-blindness forces one to rely on clothing, hair, and other secondary features, and these two very fine painters, while their likenesses are of the first order, explore so many possibilities and include so many personal details, like those gift bows that appear frequently and play many different roles, that it has become challenging to be sure. 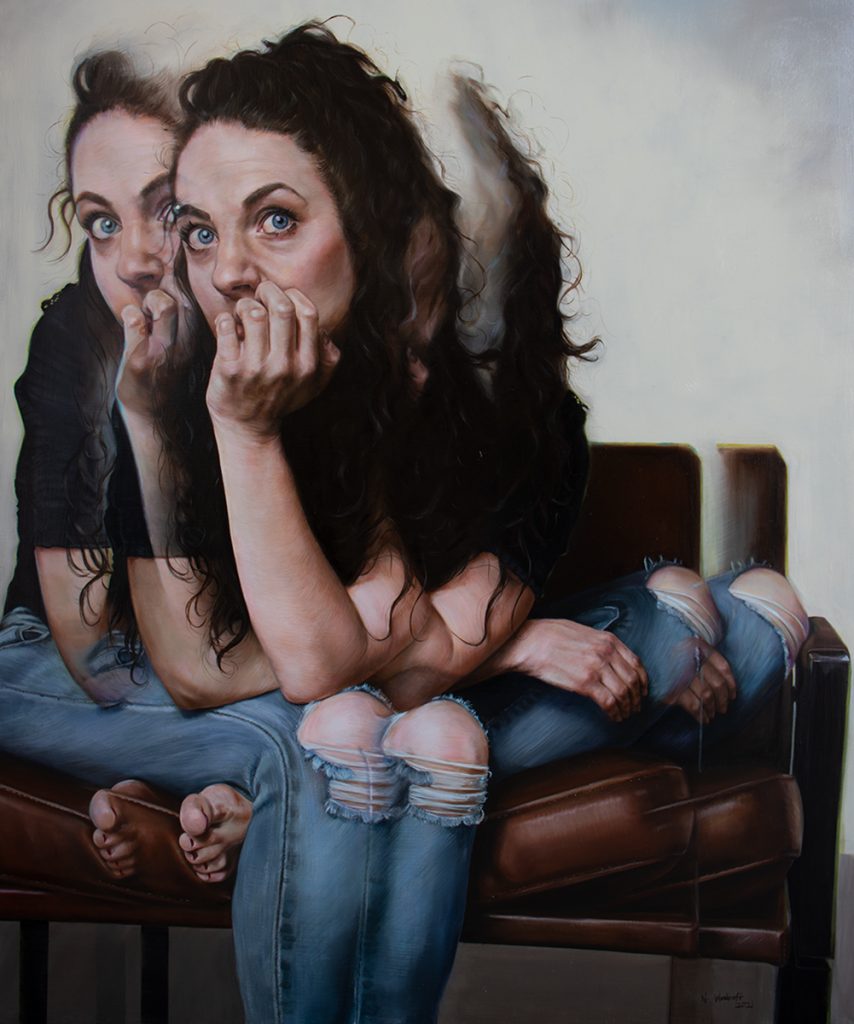 Some things, though, are very clear. Woodruff’s two children appear with her in a work titled “Unconditional,” an adjective that, applied to the two very different forms of connection shown, all but insists the missing noun is Love. Swingle loves painting luminously dancing surfaces, whether it’s the metallic ribbon of those gift bows, a mylar balloon of a star, or the surface of eyes made impenetrable by brilliant reflections. It’s tempting to wonder whether showing in tandem is a way of seeking safety, but each eventually reveals so much about herself that the question seems pointless, if not simply rude. Their art makes possible not only experiments with identity and adventure, but ways of exploring inaccessible places. Swingle has painted an entire study of Agoraphobia, surely the last curse one would want to suffer in Utah, the land that introduced the whole world to the idea of open space. Woodruff, meanwhile, projects her inner life onto her skin, accessorizing it with feathers and wasps’ nests. Their depicted scenes are rich with detail or stark in their self-presentation, either way to emphasize their moods and how they feel about the lives we glimpse. It’s not so much confessional as a way of insisting that this is who they are.

Today’s audience desires realistic figures, but not without some reason for gazing at them. Woodruff and Swingle’s subjects project credible reasons to examine them without guilt or conflict. Whatever in their lives causes them to appear and act in the ways they do is one side of a coin the other side of which is how much their behavior is a response to those reasons. Modernism struggles with the dilemma of whether to show the real, outer view of a subject, or its imaginary, or at least invisible, interior. Nicole Woodruff and Hillary Swingle are among those who strive to do both, and succeed where a lot of big name artists only succeed in revealing how clueless they really are. 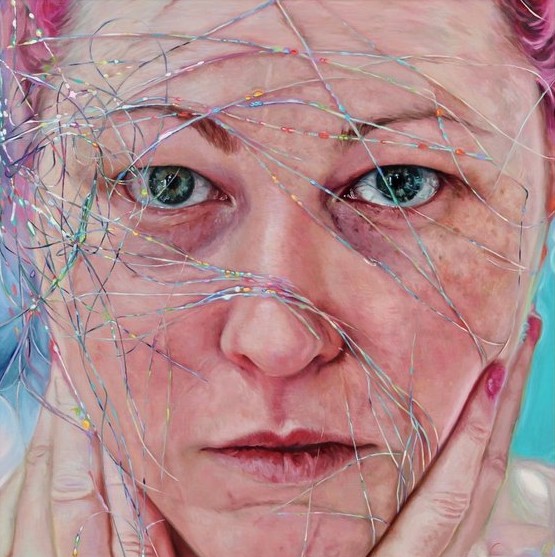