Nick Pedersen: What Will Survive the Apocalypse 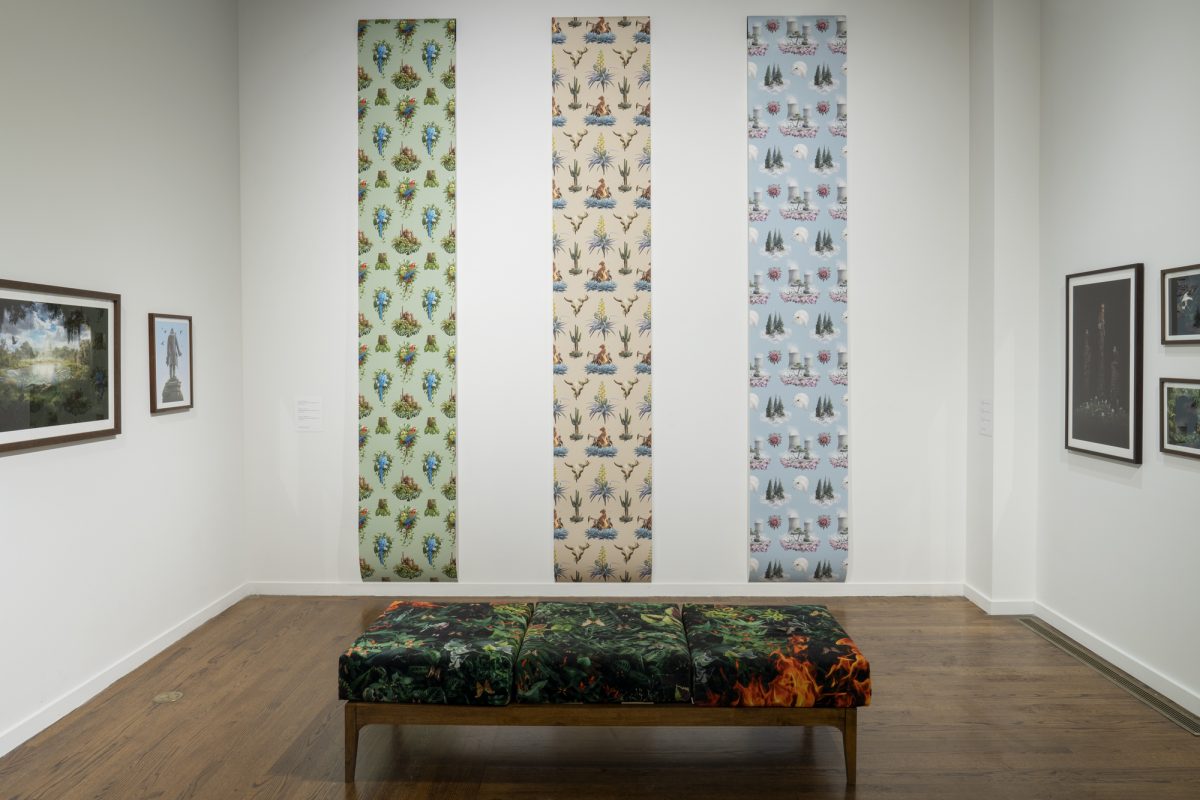 At first glance, there’s something distressingly familiar about Nick Pedersen’s Slow Apocalypse, which — installed in the Exit gallery at the Utah Museum of Contemporary Art — represents a traditional gallery, including an upholstered viewing bench surrounded by 14 framed-and-hung works. Initially it recalls, among other things, a certain public television series imagining what our planet might look like after humanity has become extinct: universally recognized monuments abandoned without maintenance and falling into ruin. Pedersen, however, quickly transcends such a pornographic emphasis on human absence per se, the thing that may most interest his audience, to correctly and vividly concentrate instead on the terrestrial wilderness that may survive our brief moment in charge: a moment after all that has lasted less than one percent of the time Earth was occupied by the dinosaurs, or the vastly longer era geologists tell us was responsible for creating the petroleum deposits that have enabled humanity to commit suicide in just a couple of centuries. 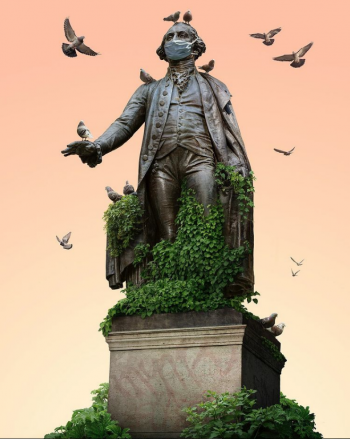 Nick Pedersen, “The Wilderness I”

All 14 images as well as the fabric covering the bench are prints in which Pedersen, aided by computer, manages to capture both a flawless optical presence and, often at the same time, a pervasive atmospheric feeling of remoteness in time — antique patina here suggesting instead an indeterminate future. Take “The Wilderness I,” for example. It’s a forced perspective, seen from below as if the viewer were standing on the ground and looking up at it, of a sculpted gentleman, in fact pretty clearly George Washington, on a pedestal up which thick tendrils of ivy have grown, and on and about whose head pigeons perch and fly in circles. These narrative layers, along with the peach-colored sky behind him, seem about to move the Virginia planter into Romantic territory, making this a celebration of our virtuous antecedents, only to be stopped by the presence on one of the most-copied, most familiar of faces, of a Covid-19 mask supported by ear loops. Instead of, say, an ante-bellum image come back to inspire the Civil War era, this adds up to a haunting post-pandemic premonition: post because, wishes and suicidal, reality-defying gestures notwithstanding, we’re not over it yet.

Familiarity plays an even bigger role in “The Wilderness II,” in which another, similarly-dressed gentleman stands in a similar pose, complete with ivy and pigeons, but with his back to the viewer. Here a phenomenon knows as “ex-formation” comes into play, as the viewer enjoys supplying even more missing information about the identity of the subject and experiencing delight as the long, curly hair this reverse view emphasizes provides the answer: Benjamin Franklin. One anxiety averted, but another not. 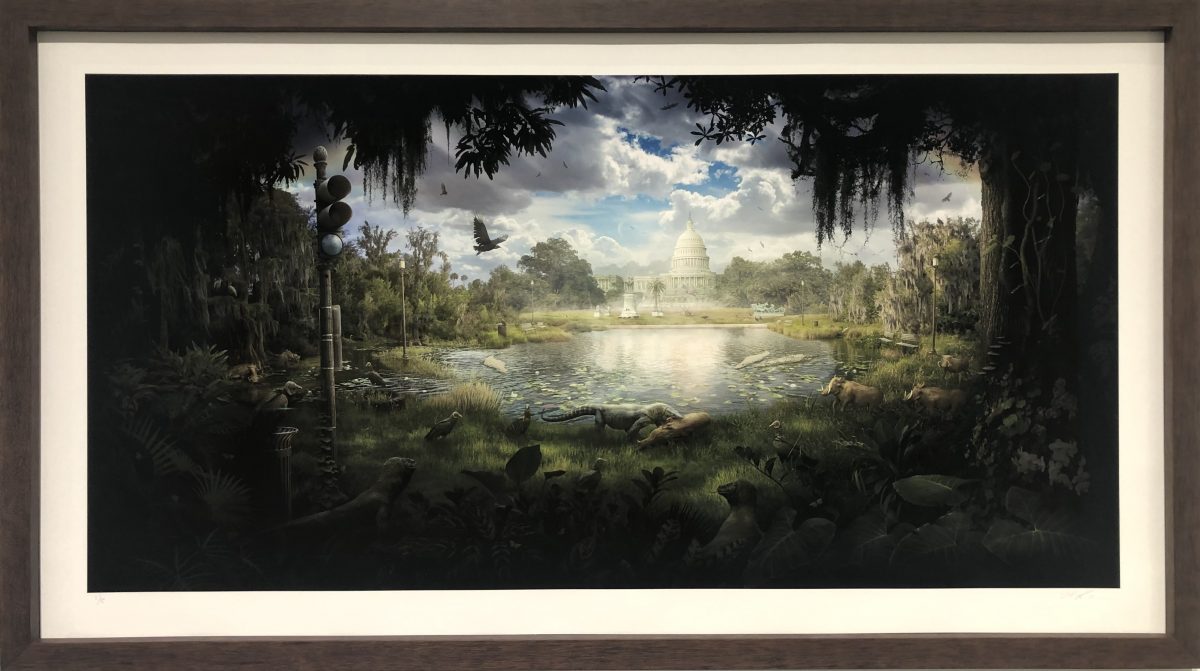 Between these two works there stretches a long panorama that can be read from far to near and back again, or near to far and back again, over and over again, each time crunching together two irreconcilable tableaux. In the bright distance, like the city on the hill, the sunlit dome of the U.S. Capitol gleams. Birds soar, and a surprisingly close Moon appears through the clouds. In the dark foreground, meanwhile, where the viewer presumably stands, monsters roam and battle with each other: denizens of the wild like buzzards, crocodiles, and boars, including some that seem like throwbacks — or forwards? — to dinosaurs. Turn back to the promise of the distant monument, and overlooked signs of abandonment and decay come into focus. Near ground level, some obscure violence seems to be taking place. In the foreground, meanwhile, a weathered, abandoned traffic signal speaks of a breakdown in civilized order, spelling out a ghostly story of a technological animal that came, prospered for a moment in that far sun, and then vanished into eternal dark. 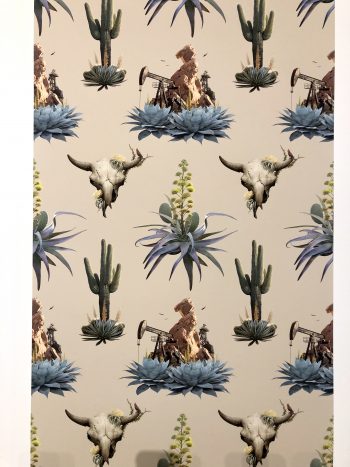 On the next wall, the “Doomscrolls” — subtitled “Jungle,” “Desert,” and “Mountains” — are two feet wide but almost twelve feet long, stretching from floor to ceiling and recalling Carol Sogard’s ‘”Endangered Geological Communities: Sea, Sky, and Land,” which showed as part of the Space Maker exhibition at the Utah Museum of Fine Arts (reviewed here in September). In the era of the eternal avant-garde, the coincidence of these two innovative formats might have forced the question, “Who rocked it first,” but here in Utah, where artists belong to a community, and in the face of the unprecedented environmental threat, it’s sufficient to say that in the digital age, artists can finally produce in studio what formerly required the industrial technology and enabling economics of wallpaper or billboard production: continuous prints that bring exquisite detail in high quality to the scale of murals. There’s an irony in employing a level of ornamental excess associated with the indulgent consumption that arguably brought about the environmental catastrophe that concerns artists today — an irony that injects urgency into the contrast between what’s depicted on the wall and what’s real.

The ironies and debatable humor seen so far continue onto a third and fourth walls, which are largely devoted to elaborating an extended joke: the use of animal skulls, those venerable symbols of mortality, as vases for the presentation of ornamental plant life. Here Pedersen, with an instinct many of us can identify with, harks back to Eden, or perhaps to a Vegan’s ideal of paradise, complete with a suggestion that half of Biology — the plant half — could get along just fine without the destructive competition of animals. In his final parable, “Canopy,” a large diptych, Pedersen omits the skulls in favor of the opulence of a world of plants almost devoid of animals — except, that is, for parrots that almost blend into it in mutual mimicry. He may have in mind that birds descended from dinosaurs, beasts that once ruled the Earth the way humans now do, but in a much less destructive manner, and eventually evolved, in order to survive, into animals that fly and fit, rather than dominate, their ecological niches. These works complete the metaphorical argument that with mankind out of the picture, no longer in competition with everything else that lives, nature might recover the opulent splendor and beauty that covered the Earth before humanity’s brief interruption. It could happen. Or Earth could end up looking like Mars, a planet once covered by oceans of water, but that now presents as a lifeless desert. It’s arguably a good thing the choice is not entirely ours to make. 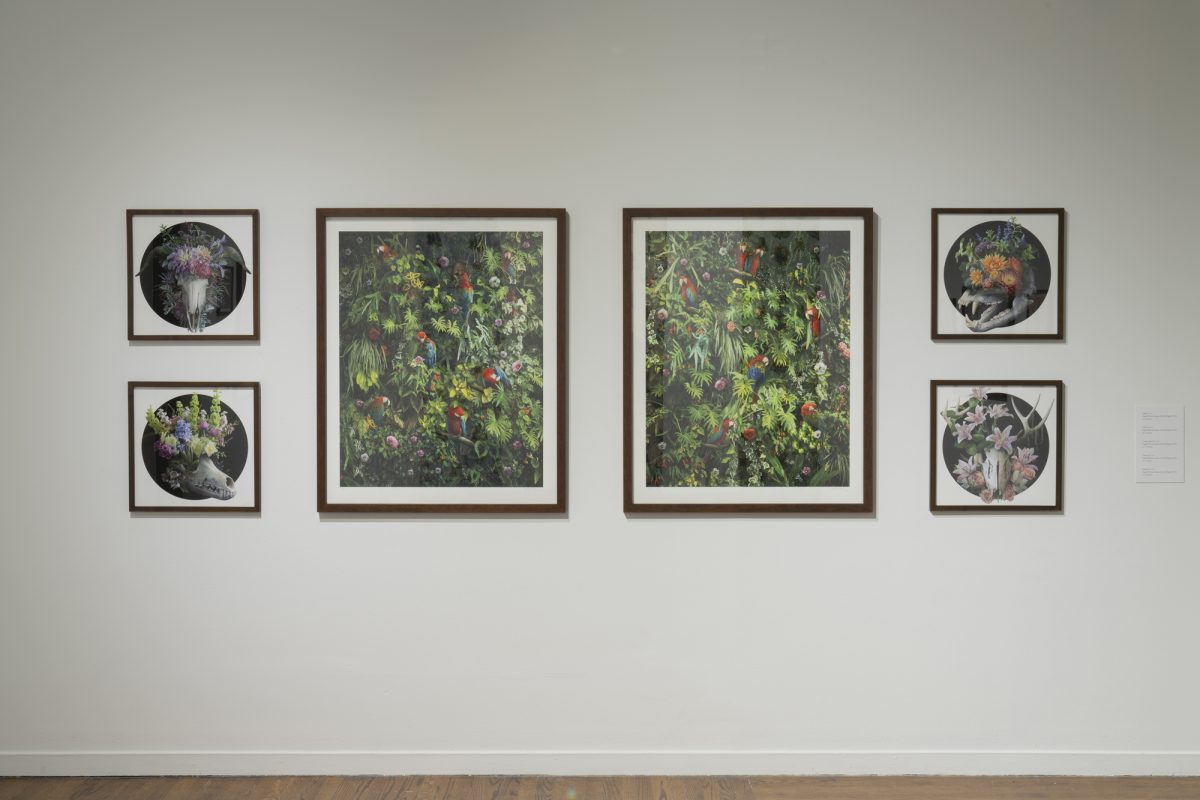