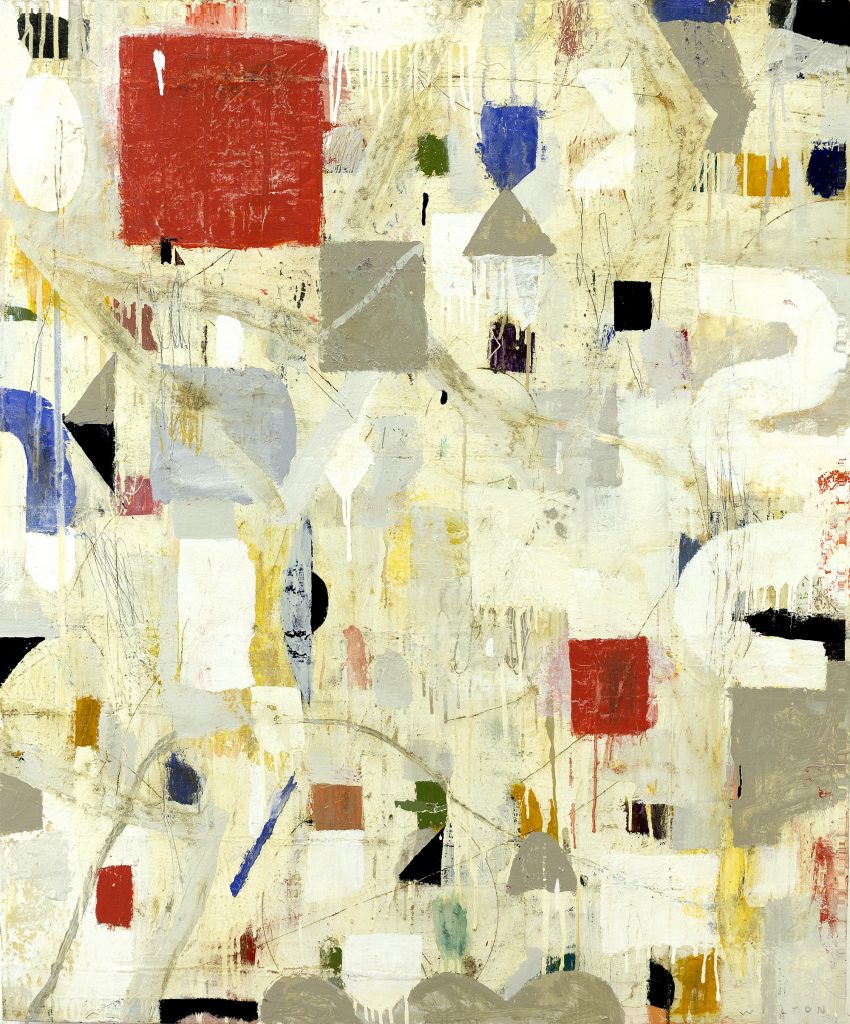 Colorful. Full of life and energy. Radiant. Joyous. An explosion of color into form. All words and phrases that describe Untamed, the new body of work by Nicholas Wilton at Julie Nester Gallery in Park City. But walking into the gallery, surrounded by so many large and busy panels, the feeling most strongly transmitted is sheer exuberance. After 9/11, it seemed as though every artist in America felt a need to respond, and do so with some grim image of catastrophe. In the midst of an ongoing pandemic, with no sign of its relenting, it’s to Wilton’s credit that he found a way to rise up and blow aside the fetters of ennui, anxiety and the stifling of emotions, joy, and laughter that seems to have settled like a cloud over the land.

Wilton has written that he was surprised that the general malaise he observed did not curtail his creative impulses. Rather, at a time when many were craving some new adventure or frontier (like baking bread or collecting jigsaw puzzles) he found himself eager to dig deeper into his art: ready for a transition away from the security of learned rules and cautious experiment: ready to go wild. Instead of planning and forethought, his work became spontaneous. His color palette became less harmonious and the results less certain of his approval. He says he’s still trying to decide if this is a long-term new direction or not. Considering how many of these panels make this claim on the practiced eye—that one could look at them every day and never grow bored, never fail to find something new, here is a vote in hopes it is. 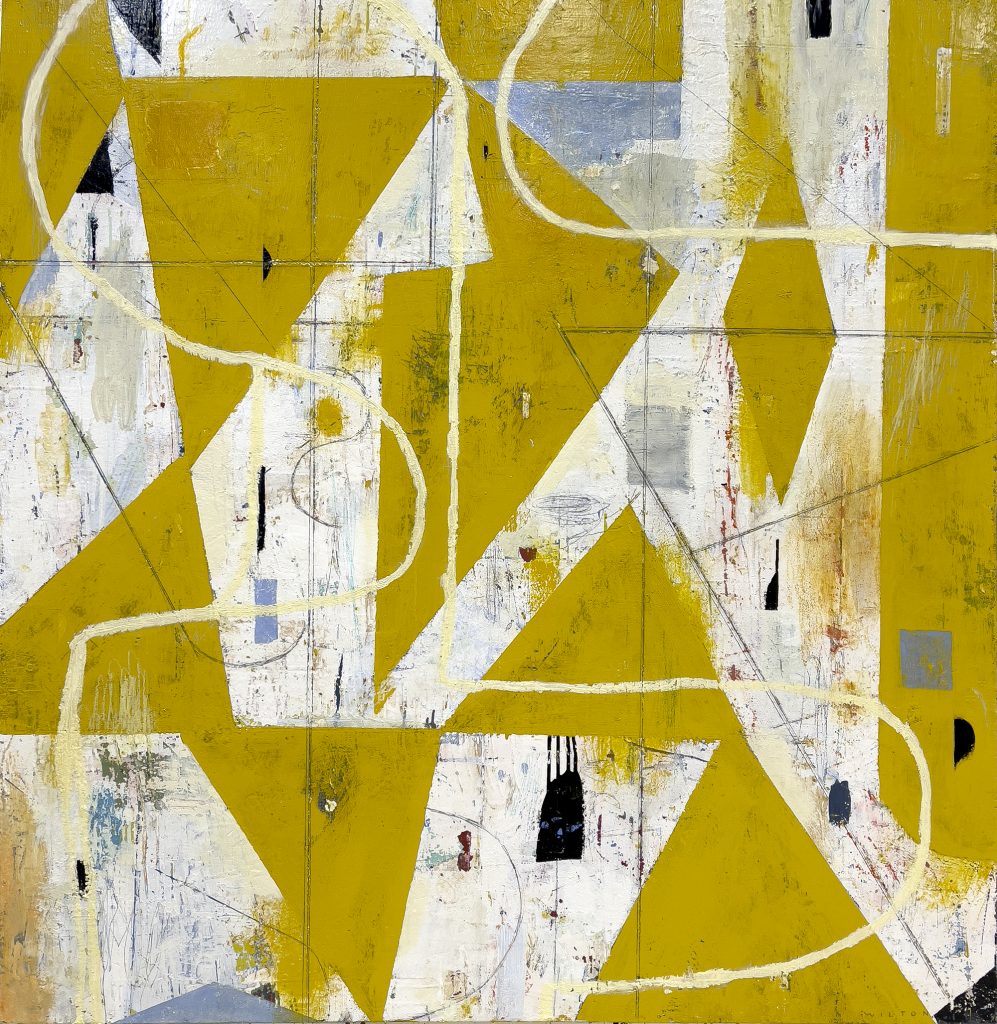 Consider, for instance, the third dimension. Wilton has what seems complete control over the location in space of every one of hundreds of marks, some of which take the form of unique objects, others of porous screens — or masks? — through which yet other forms are glimpsed. All the brilliant ways our brains have discovered for sorting and identifying things in our visual fields are at work here, under the artist’s control: overlap, relative size, chroma, luminosity. It helps to see how a work of art was made — essential to fully grasp it — and so in “Origami,” the four principle layers were laid down from back to front. On top, last to be take shape, white lines travel sinuous courses near the picture plane. Just below, easily missed, gray lines drafted with a straightedge establish a geometric energy field. The mustard yellow dominates the painting, creating a plane parallel to the wall and exerting control over the lines to keep them flat. It’s also a screen, through which a much-scratched and marred, pale background is visible. But the same parts also belong at the same time to a two-dimensional composition, one the eye sees first, and the result is a space filled with objects composed in depth. Not many artists can pull this off; Wilton does it again and again in Untamed.

Among the more contemporary and effective elements here are the works’ surfaces, whereby Wilton delivers a subliminal fourth dimension, which is the battering that comes with the passage of time. His paint layers are often thick — in fact, about as thick as can be kept on the canvas. Alternately, thinned paint or uncut solvents produce various drips, like in “Out West” or “Peekaboo 2” or elsewhere, that deliver a dynamic alternative. There’s a lot of oil stick, which sometimes looks like scribbling and other times like the paint has curdled. In and under the layers are inclusions, such as the documents visible through gaps in the paint in “The List.” Add various means of damaging the wet surface, like rubbing sheets of cloth or paper into the paint and pulling them off again, or, when dry, sandpapering, blistering it with a torch, dinging the skin and maybe repairing it visibly, and the weathered surface begins to invoke barns, garages, old wood, painted signs and dilapidated vehicles: an anthology of painted surfaces from before the day when all things, from shampoo bottles to Trax trains, came to be covered by pre-printed and immortal plastic labels. 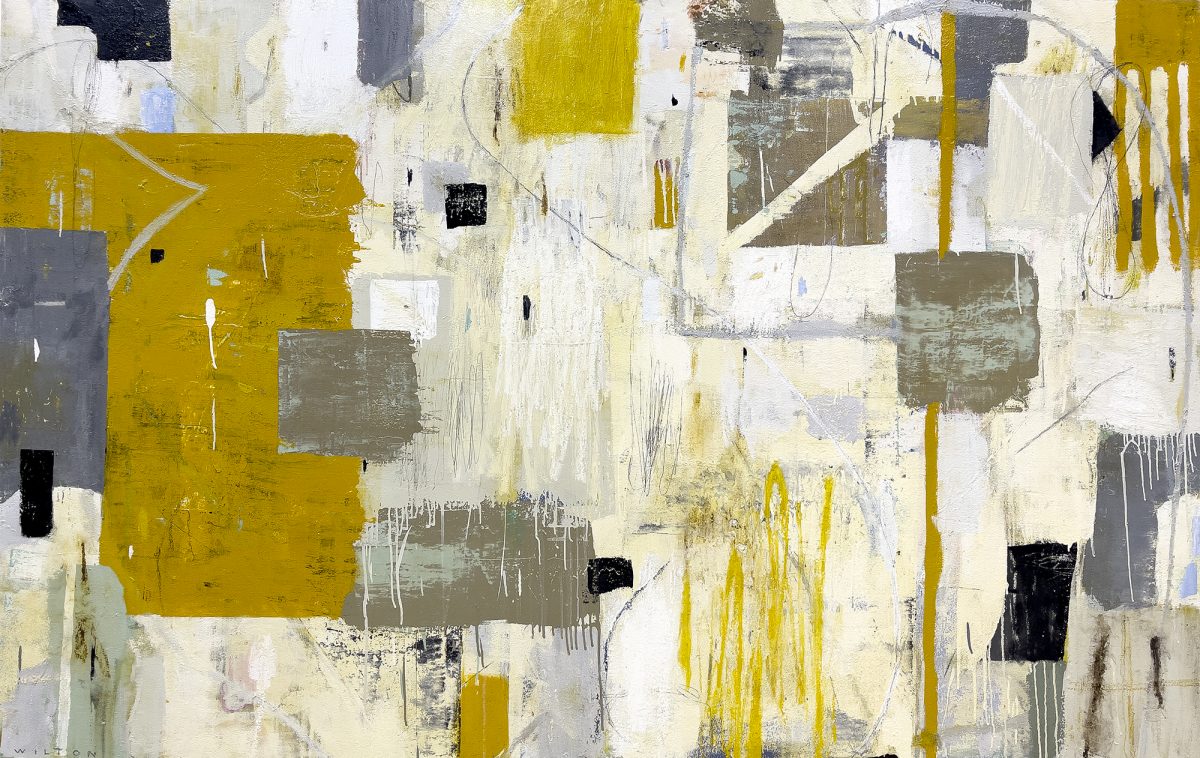 The basics of mixed media have become so popular lately that it’s almost more useful to say when artists don’t mix it up than when they do, but Wilton works hard for the result he wants, and not the bragging rights. Nor is there any evidence that his titles are clues to his meanings: “Padre” or “Pink Square” name a prominent feature to identify the whole, and must have been chosen after the paint had begun to dry. In fact, behind the multicolored, dancing surfaces, these are the works of an artist who is also an athlete, one who works hard physically as well as cerebrally, dashing through a work as if thereby to keep himself from stopping long enough for doubt, about either the art or the artist, to find a way to creep in. Even so, Wilton has developed a kind of handwriting over close to 20 years, a distinct approach that draws not only on an inventive hand and eye, but on a retentive memory. The result is something like a linguist’s definition of human speech: a finite group of elements and an established set of rules results in an infinite range of expressions. You recognize that it’s Wilton painting here, even though you never see the same exact thing twice. Nor is this autobiographical art; like he says in his statement, this work does not respond to the miasma and national self-doubt that has overcome his country. In fact, it denies it. In fact, it soars above it. 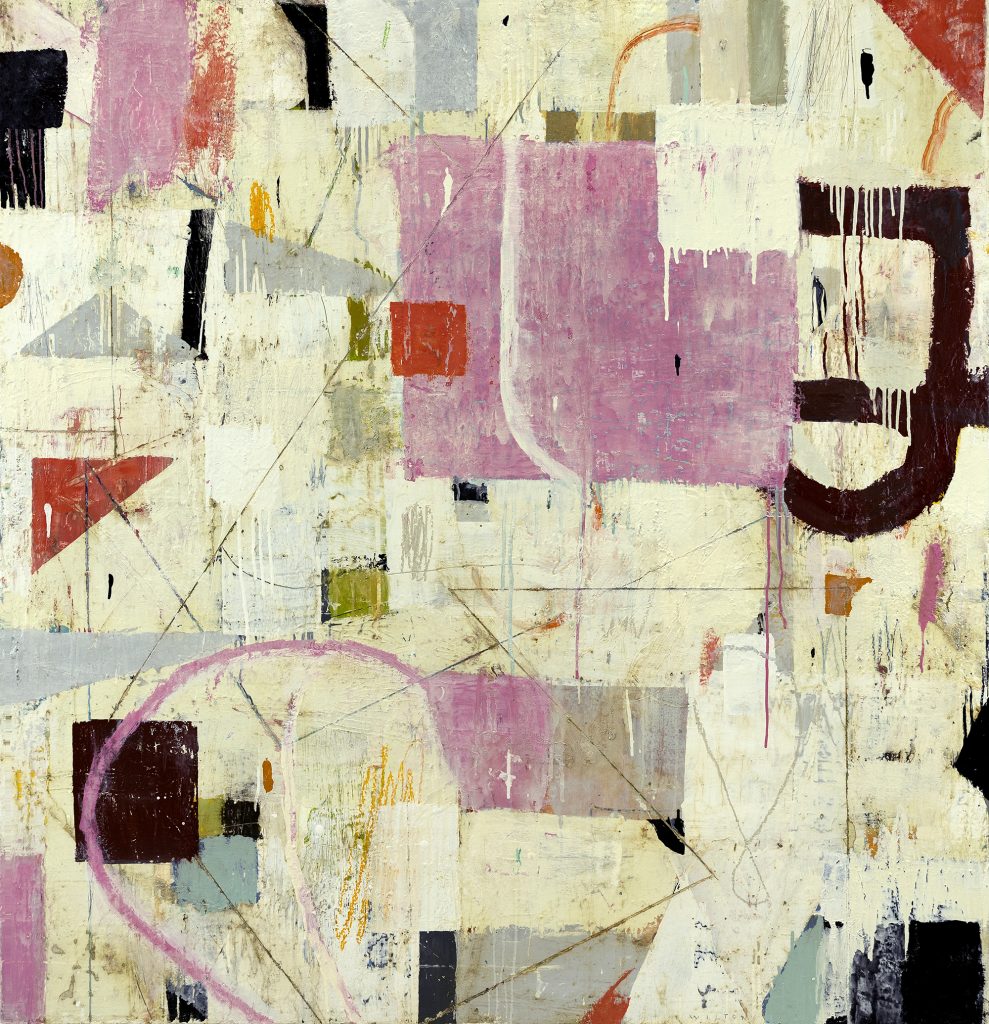