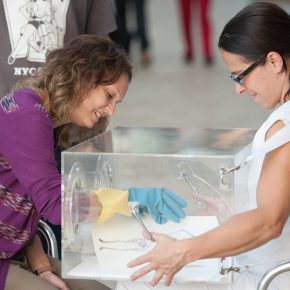 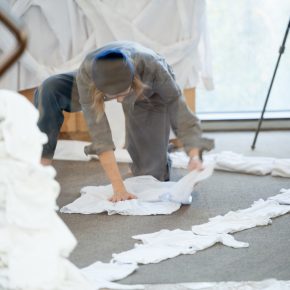 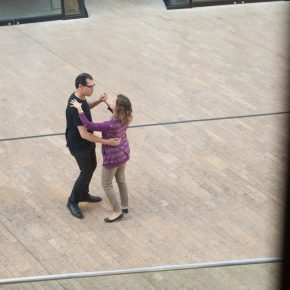 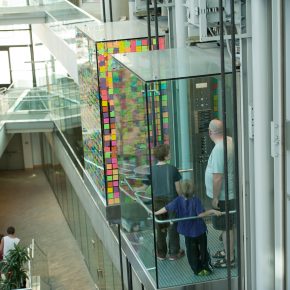 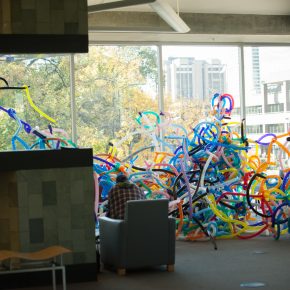 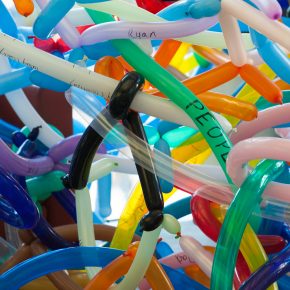 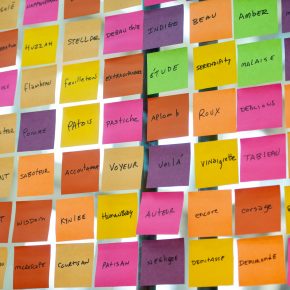 The library setting provided a unique incubator for viewing artwork and creating new interactions. The Main Library is always brimming with patrons from all ages and walks of life, so while some people were there specifically to see the performances, there were many more who were using the space as it is—a library—and were not seeking out artwork. The performances accosted the norms of the space, which allowed for new audiences to participate in the process of art-making. Brash, confused individuals would approach an artist with the simplest question—“What are you doing?” It created an ephemeral, unique point of interaction between a new audience member and the artist. At times it was embarrassing for both parties, the artist being outside of the insular art community where people are in-the-know, and an unknowing audience member trying to make sense of what was going on. These new viewers were seeing bizarre actions labeled “art,” which they know to mean the height of beauty and value, yet they were presented in a way that didn’t make immediate sense. When asked about a work’s meaning, several artists hesitated for a moment, thinking of where to begin, what to say, and ultimately they entertained and even invited and allowed a relationship to begin. However, those artists who were unable to speak to and invite dialogue with the audience regarding their pieces seemed to explicitly cut the line of understanding, which can be part of a direct artistic intention yet limits understanding of all involved. In this way there was a large variation of works presented during this event, different types of performances and ideas about the role of performance art and audience.

Stephane Gilots, an artist hailing from Montreal, presented his piece, “Station Library,” for the entirety of both days. Instead of the viewer watching the artist, Gilot invited the audience to become the performers while he directed and documented. Gilot created a voyeuristic experience by invoking the fascination of space travel. In this work he provided a handmade “space suit.” The audience would then put on the suit and begin a hunt to find a book from a list made by Gilot. The hunted books were on the subject of space, but ranged in how they dealt with the idea of the great unknown. In this action, participants became explorers in a place they thought they knew but were forced to explore—shelves in sections they might have never before realized were in the library.

With his project “Next,” Salt Lake City resident Eugene Tachinni invited the audience to participate in a step-by-step project with written instructions that were passed out by the artist. First, the participant was asked to think about a person who makes their life better and to write their name onto a long balloon. They would then tie their balloon to an increasing mass of colorful balloons, take a photo of it, and use social media to hashtag the image with the artist’s name. Lastly, they were asked to write or talk to the person named to express their feelings about them. Visually, without all of the added steps, the installation was a sight. People were drawn to the massive links of balloons and naturally wanted to tie the balloons, which alone were able to portray the sentimentality of personal connections without the other steps/elements. “Next” allowed for many users to perform at one time and through various mediums and social media, which allowed participation with the audience beyond the real time. This type of performance used audience participation as the physical act with the artist acting as a curator with an implied intent that the audience will hopefully reach through the motion of the art-making process.

On the other spectrum of performance art, there were also several performances that were more theatrical procedures (the artist performs and the audience watches). Lisa DeFrance, a local, performed both days for varying times within the library’s “Share” space, which is a closed glass room. During that time, DeFrance took piles of used white clothing of all types—baby clothes, women’s chemises, men’s polos—and folded and arranged them into piles and formations. The work was aptly named “Fold: Repetition and Difference.” As seen in photos on social media, the performance wasn’t particularly engaging, but in person, looked at through the glass, little details gave the work added texture—the clothing showed the signs of wear, some had sweat stains on the arm pits or dirty rings around the collar. “To whom did the clothing belong?” these details seemed to ask. DeFrance performed while never looking up at the audience, as if in her own trance of doing. It gave the audience the liberty to gaze without shame, to look at her hands, her outfit, her space without ever feeling her privacy was being invaded.

Kristina Lenzi, the organizer of the event, also performed on Saturday. Throughout the day she could be found wandering the library, her mouth and head wrapped in gauze, and wearing a large blue striped sweater. Instead of hands, coming out of her sweater’s long sleeves were white ropes with the ends attached to books that dragged on the floor as she walked. Her performance begged the recurring question, “What are you doing?” but offered no possibility for an answer since her mouth was wrapped. The performance was suggestive enough, however, to send one through a catalog of historical references, searching for meaning and thinking, “Well it could be about race? Or violence? Maybe she’s being tied down with a ball and chain?” Etc, etc. An audience craves understanding and connections, ways to decipher meaning, and “Trickster,” as the work was aptly titled, creates that connection by disconnection.

The Performance Art Festival featured many additional works. Jeffery Byrd (Waterloo, IA) filled the glass elevator with a post-it note collection of beautiful words. Caroline Boileau (Montreal) invited visitors to read and view a precious book inside of a plexiglass box, which she carried on her person. Tatiana Larsen (SLC) dipped her feet in honey and slowly paced along a circular platform until she picked up all the gold leaf flakes that had been placed there. Marilyn Arem (Boston, MA) gave participants the opportunity to use special dice to create new words, which were then added to a dictionary of words. Amongst all fifteen performances there seemed to be several that took inspiration from ideas of language, words and literature.  This overt connection to the function of a library may not have been necessary, because of the space’s ability to forge new relationships and conversations as a public gathering place, but it did help to inform the pieces in a way to help them to seem organized and approachable instead of a public fluke of which the authorities should have been alerted.

The 2014 Performance Art Festival at Salt Lake City’s Main Library featured fifteen artists on October 17 and 18.
This article is published in collaboration with loveDANCEmore.org.