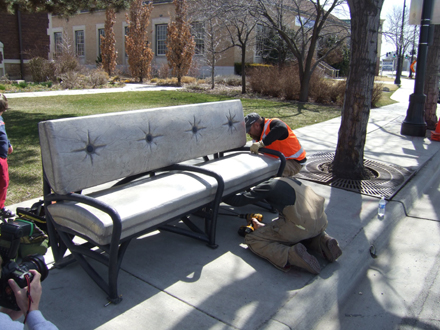 With a gaping hole in its heart now, Sugar House is less of a draw these days than it was in the recent past when galleries, furniture & curio shops and plenty of caffeine distribution centers pulled in a variety of demographics. The demolition of the 21st South and 11th East corner was halted earlier this year when the tear down began to affect the adjacent building — Rockwood Studios. The residents of the neighborhood are slipping into a collective malaise at the prospect of the demolition area going the way of the Redman Movies building (21st & 13th), which sat half-done for a couple of years before new owners came in and decided to finish the project.

In the past few years, The Salt Lake Art Design Board has added a number of art projects to the area, including the sugar beets one can find at the library and in the Sugar House Commons and the fish along 21st south. Their newest public art project, funded by the Redevelopment Agency of Salt Lake City, was announced in.

The project consists of six artist-designed benches located throughout the Business District.  Designed and fabricated by Albuquerque artist Eric Thelander, the benches have the appearance of plush patio furniture but are actually cast concrete. They are meant to evoke  Sugar House’s long history of furniture stores, both new and second-hand, but considering the material one can’t help wonder if the benches won’t make residents and visitors think more of the “hard” times the neighborhood is going through right now.

Has anyone out there actually sat on these benches? And are they as cold and uncomfortable as they appear?