Native American Celebration in the Park

For more than 15 years, the drums of the Intertribal Powwow have been heard in Liberty Park just as the Days of ’47 Parade disbanded. Part of the Native American Celebration in the Park, founded by Salt Lake City graphic designer and Navajo Cal Nez (see our July edition) and still headed by him, it has grown into an enormous event: 65,000-85,000 people are expected to attend this year.

While other activities that day are free, the powwow costs a lot to put on – the arena director, master of ceremony and tabulator have to be paid and prize money distributed – so there is an admission charge of $5. Anyone under the age of 6 or over 65 attends at no charge. There are two Grand Entry ceremonies, at around noon and 5 p.m. Prize money is given in the drum contest and for males and females in different age categories in the Fancy, Fancy Shawl, Grass, Jingle and Traditional dance categories. Registration begins at 11 a.m. and the powwow goes until the awards ceremony at 8 p.m. Nez encourages you to bring your family and your chairs.

The Main (cultural) Food Court and Arts and Crafts Vending open at 7 a.m. and close at sunset, just before the fireworks display at 10 p.m. 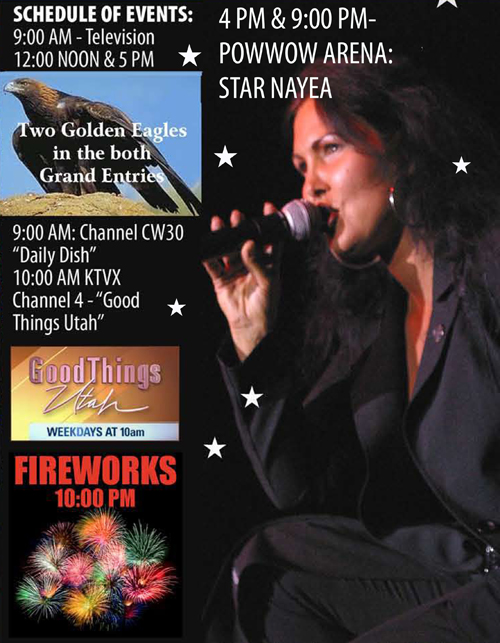