Nathan Florence Heads Towards a New Idiom at Modern West

Prolific Utah-based artist Nathan Florence has never been averse to change (as we’ve noted before in 15Bytes) but his new exhibit leads us further into his ongoing process of exploration and the resultant progress. While many artists will try to demonstrate their progress in leaps, often pivoting direction entirely, this particular collection of work seems to present a halfway point in that journey. It’s a step forward certainly, but it’s as though it’s the next chapter of a book we’re already anxiously reading.

That effect isn’t lost on Florence or the curators of Modern West who share the sensibility that the show will engage the audience in that sense of exploration. The feeling is echoed in the content of the work itself as we’re shown deconstructed vistas of familiar mountain ranges. The tall peaks seem to grow before us as they simultaneously complement and compete with the surrounding vibrant brushstrokes. You can see the energy in the application of the paint and effort Florence is making to wrestle the colors and canvases into submission. While last year’s show was more fully engaged in textures and fabric, this new series leaves that behind for an expansive wilderness. We’re given the sense that the mountains we see before us aren’t only an observed subject matter, but a metaphor for the conceptual visions that the artist is facing. 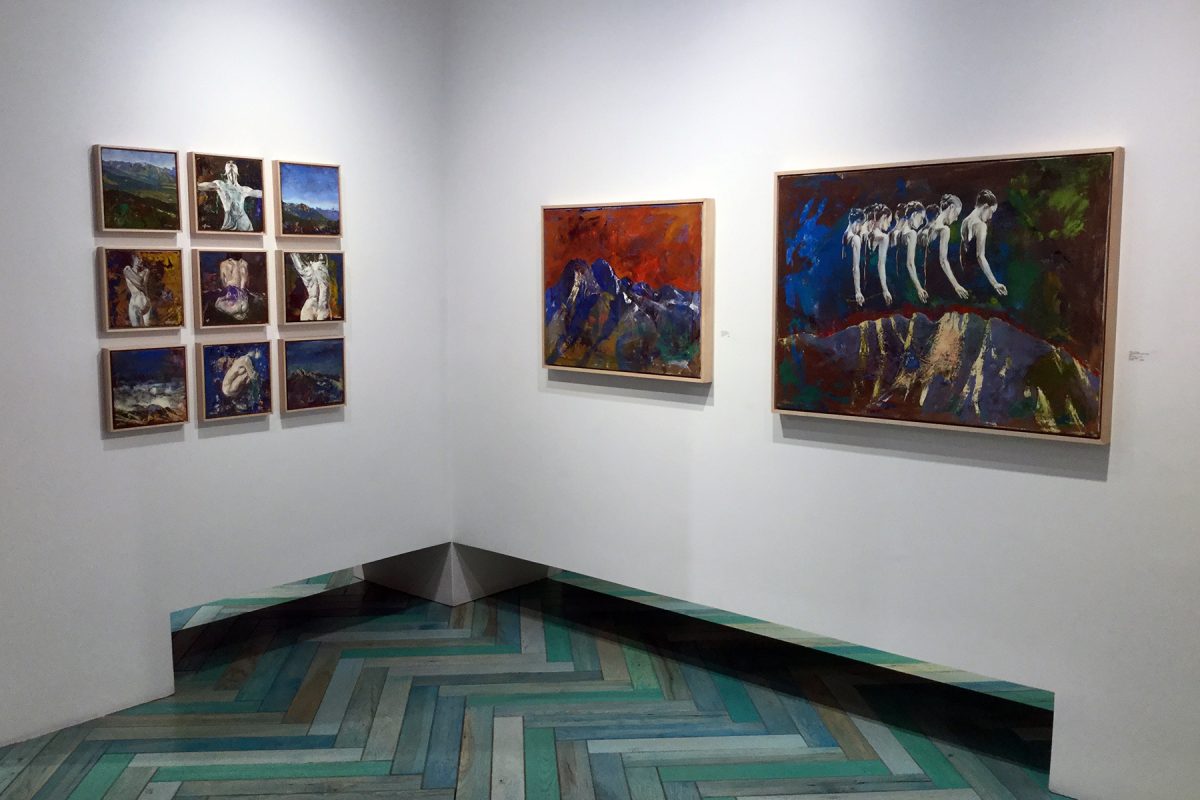 Reflecting this sense of grandeur is the juxtaposition of the familiar figures from Florence’s previous work. The strong human forms appear to almost mimic the landscape in both form and fragility. Carefully bent bodies become skylines of their own and yet their sense of self-awareness conveys a need for fortification, demonstrating a vulnerability that one can’t help but see in the surrounding mountains as well. Others seem to draw strength from their environments as if working in tandem with them to evolve and grow. Of particular note is the piece titled “There Is An Instant.” Here we see, perhaps more directly than in others, the symbolic strength of the female figure, her arms poised above the mountain peak with hands carefully wrapping around each other as if to generate their own energy. She dominates the horizon while also being consumed by it and the push and pull of that scene creates a feeling of constrained power from them both. There is discovery there, both of outer landscape and the inner being.

In his artist statement, Florence writes, “My view of the mountain has shifted, physically, and philosophically. I’m hard pressed to think of a time when I haven’t looked up at Mt. Olympus without a sense of awe… I have painted it many times in the past, but never set out to make it a focus. As I have now lived in various views of the mountain it occurs to me that part of my wonder with that process of discovering the beauty of the mountain mirrors the process of discovery with any great idea. It bears—demands even—a continually shifting view and examination.”

Florence’s use of the figure in moments of tension amplifies this sentiment. They are in worlds of their own and caught up in moments of self-examination. Men seem to hover over each other, just on the verge of falling. One woman seems to be actively breaking her bindings as her arms and hands flex against them. That particular painting, titled cleverly “Break of Day,” is particularly poignant in its portrayal of a woman freeing herself from a long rope or wrapping. Its title seems to suggest an emancipation, and paired with the strong figure gives the sense that she is poised for a new start. The scene speaks directly to the cultural shifts we see as women are finding increased strength to assert their rights and unique place in the world. The figures become mountains unto themselves, rising with a power and grandeur that cannot be denied. Whether or not Florence has intended this in the portrayal of these figures, he has certainly created a body of work that reflects the current conversation. The forceful application of the surrounding color and landscape adds to a vitality that opens the door to conversations about our interactions with one another and the land we inhabit.

An exhibit such as this finds its success in both its vulnerability and its direct invitation to join in its visible progress. As the audience allows itself to become of part of the work and the development of the artist, it will discover that Nathan Florence’s work is as much theirs as his, if they are willing to participate.