A resident of Wellington, Utah, in Carbon County, Takacs is the author of three poetry chapbooks and two full-length books of poetry, Blue Patina and Preserves (City Art Press, 2004). In September, Finishing Line Press will release her collection Red Voice. Most recently she was awarded the Juniper Prize for her collection The Worrier.
In the citation, 15 Bytes’ judges write that in this powerful volume,

[T]he natural world is deeply embedded in her language. Human existence coincides with the earth’s natural rhythms to create a spatial and temporal topography—what is routine in nature becomes ritual beneath the speaker’s observant eye. The first poem acts as a “proem” or preliminary commentary on what we will encounter: a myriad of observations that contain an undertone of wonder found only by those who have wandered far enough to the edge of a Utah forest or into the center of a foxglove blossom to see what others can’t or won’t notice. Several poems provide a sense of place—namely the rural area of Price, Utah, near where the poet resides. The vastness of the landscape as described in the poem “Utah Map” is contrasted against specific landmarks such as “an American flag/ time and wind ate except/ for a few withered stars” drilled into Balance Rock by “a woman from the town of Elmo,” or an Anasazi granary near Escalante. Other poems are written as a series of calls and responses, the answers lyrical and strange. In one line a botanical word describes best the multiplicity of sight and voices existing throughout the book—rhizome: “I want…[to] know under the surface/how long the trail of rhizome/can be, for one blossom.” Yet, despite the hint of a complex source, the emergence of a linguistic landscape seems effortless. Thus, the gift of these poems: sight on the ground or in the sky—patient, observant, sensory, precise, and always, always exploring.

Blue Patina is one of three collections of poetry that were finalists for the 4th Annual 15 Bytes Book Award, the winner of which receives a modest cash prize. Poets C. Wade Bentley and Rob Carney, both finalists from Salt Lake City, will appear with Takacs later this year at an honorary reading and celebration during the Utah Humanities Book Festival.

To read the 15 Bytes review of Blue Patina by Danielle Dubrasky, click here.

15 Bytes caught up with Takacs via email recently to ask her questions about the winning collection and her forthcoming work.
15B: In her 15 Bytes review of “Blue Patina,” Danielle Dubrasky says that as a poet you seem to be someone “who sees and hears many things and by doing so creates a ritual,” and that “[t]he ritual involves community even when the speaker is solitary.” First off, do you agree with that assessment, and if so, can you address how this happens to you–drawing from the solitary observations of a poet and translating it into a community ritual?

NT: I had not thought about this until Danielle wrote the review, but yes, I can see how some of the poems can be read this way. Rituals are of course symbolic, mysterious, rippling away. They give us a sense of belonging. I find writing poetry is a ritual for trying to embrace what is beyond myself. I guess I am looking for connection, as well as rebellion against routine, what is under the surface of disparate words and experiences, the mystery of what creates intimacy, maybe arriving at a point at which our lives are not parallel any longer. But since writing poetry is also a personal act, there is also delight in finding one’s own edges within language, and within the voice, and the voice is solitary.

One poem that happens to start with the solitary and then find community is “New Year’s at Albertson’s.” Living in a small town like Price, you find that everyone knows everyone. This feeling of community in a grocery store has its ups and downs, and the poem reflects that. It opens with “Sometimes the store is better than the internet.” You find out what’s going on in town while shopping, although at times you want to just be anonymous. In the writing of the poem, I included what one might feel–liking the idea of hearing news about friends, avoiding acquaintances you don’t want to run into, but then finding yourself in conversations anyway, waiting at the deli. The poem ends with the woman cashier the speaker knows and talks with about the local herd of deer that travels around their same neighborhood and how they worry together about the herd’s food supply during the cold weather. The speaker feels uplifted by this connection, and there is a communion because they both care about the deer. This intimacy was discovered in the writing of the poem, based on the truth. But at first the poem was going to be just a humorous poem about mundane events. That is not where the poem wanted to go.

15B: Tell us about your “Worrier”poems, a collection of which just won the Juniper Prize. What were the origins of these poems, and how did they finally emerge into a full-blown collection?

NT: My first “Worrier” poem wasn’t titled “The Worrier.” I remember writing it in Wisconsin several years ago where my husband and I go during the summer. I do a lot of writing there. I was having fun writing in various forms before this and thought I had never tried to write a poem in the question and answer form that these poems are in. I was just playing around, and the poem “The Woman I Always Wanted to Be” sat in my notebook for a while before I felt I had to write other poems in the same form. I was happy to keep the poems to myself. I wasn’t sure where they were going, but I liked writing them. I didn’t know if they worked.

After some months, I showed them to a few readers. It won a poetry award in the Utah Original Writing Competition. Then it was accepted for publication. As the sequence came into being, I felt the questioner and responder seemed to worry about different topics related to mid-life, a love of and need for what is natural around us, and a mourning for our disappearing wilderness and the lack of compassion in our world at large. So each poem became titled “The Worrier” with different subtitles.

Some of the first Worriers appear in a section of Blue Patina. At the time this book was accepted for publication, I was writing more of them and had a book of new Worriers. I found that what the poems needed to be could only be written inside this particular form. The form brought the language to me, and then the sequencing. I’m both shocked and delighted that The Worrier Poems will be published next year. 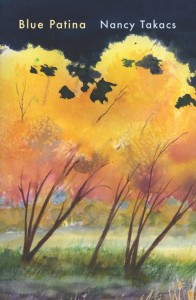 Congratulations to Nancy Takacs for her winning book Blue Patina!