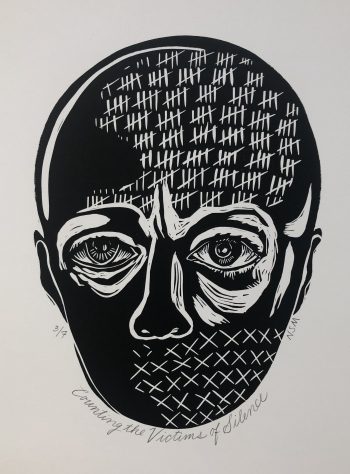 While discussion of a book often begins with a quotation, talking about art more often requires a description. The graphic art of Nancy Steele-Makasci, which grabs viewers by their eyes but speaks to them as well through the written word, requires both. A stark, high-contrast face with large, compelling eyes is covered by hash marks, the ancient form of counting classically used by prisoners to track the days of their imprisonment, but which marks here don’t just cover the forehead, but block up the mouth. This is “Counting the Victims of Silence,” and once the title is read the image becomes indelibly identified with it.

We critics tend to question art that stresses content to the exclusion of form: that attempts to teach a specific lesson. And there is no point in pretending these works do not express political ideals. Yet unlike propaganda, these works of art are rooted in the artist’s personal experiences and not in ideology. And it is the visual, through the same aesthetic properties through which all art speaks, that makes the arguments powerful and convincing. In her biographical statement, Steele-Mukasci tells of growing up in poverty, but with a need to express herself visually, and tells how her need to communicate overcame the many material shortages from which she also suffered. The part of her story that best explains her art comes when she describes not why but how she works:

My working process involves creating numerous sketches for each work, including numerous layers of drawings on tracing paper or vellum. Sketching initial ideas quickly and spontaneously has become an essential ritual in my working process. I believe that creative ideas are unique and powerful, sometimes even magical, often only appearing once. It is, therefore, the artist’s responsibility to capture these inspired phenomena while still vividly alive in the mind’s eye and commit them to paper. If not, these creative bursts, suddenly conceived within the artist’s mind, may disappear forever, never to return.

Steele-Makasci has already learned the most crucial lesson of creativity, which could be summed up as the importance of keeping a notebook or sketch pad always at hand, because unlike the end results of logical processes, inspirations are the largely accidental product of contingency and, if not committed to some durable form, are only too likely to be irretrievably lost. Stories abound of wonderful ideas lost forever, the most famous being Coleridge’s account of losing almost an entire epic poem, Kubla Khan, when a knock at the door prevented him from writing it down. This is true not just of visual artists and writers, but musicians and others as well. 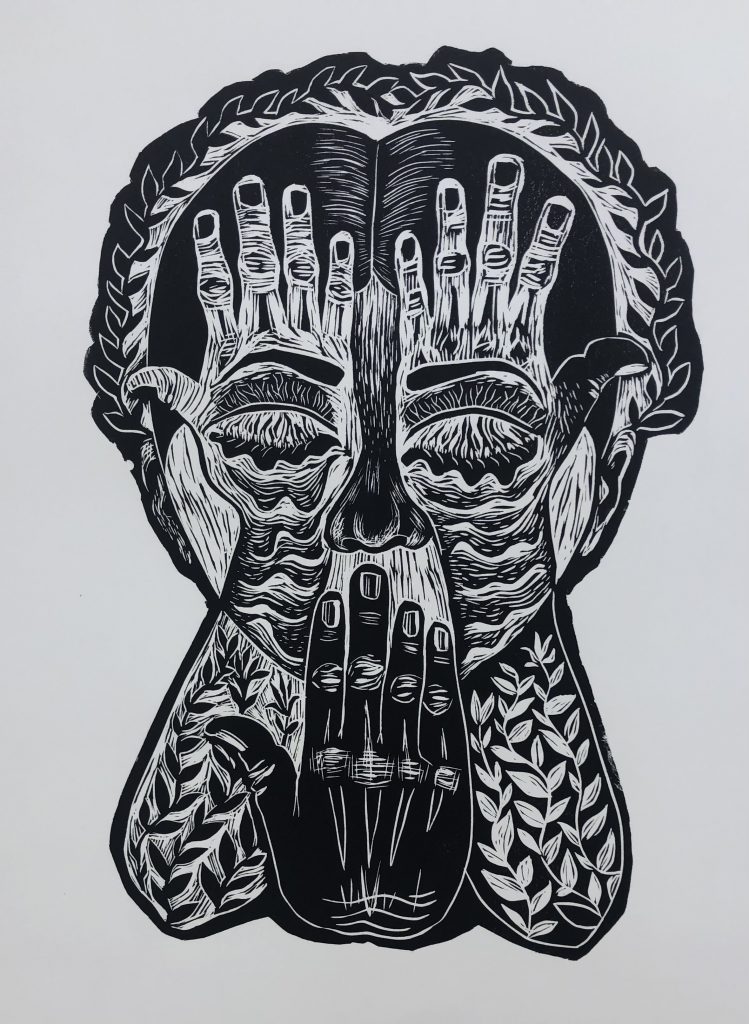 Steele-Makasci clearly understands that inspirations are unique statements, and while they rarely arrive perfectly expressed, can be polished and improved by hard work. At the same time, any effort to make them universal by stretching or elaborating their contents can only diffuse their power. Yet one inspired work can also be the inspiration for another, as the evident connection between “Silencing” and “Weeping Despair” makes clear. Still, what happened to George Floyd captured and focused the attention of a nation, and once again made the point that one death is a tragedy, while a million deaths is a statistic. Throughout her several elaborations on Floyd’s tragedy, then, Steele-Makasci keeps the focus on the individual and resists any temptation to generalize, even while his story is anything but unique. 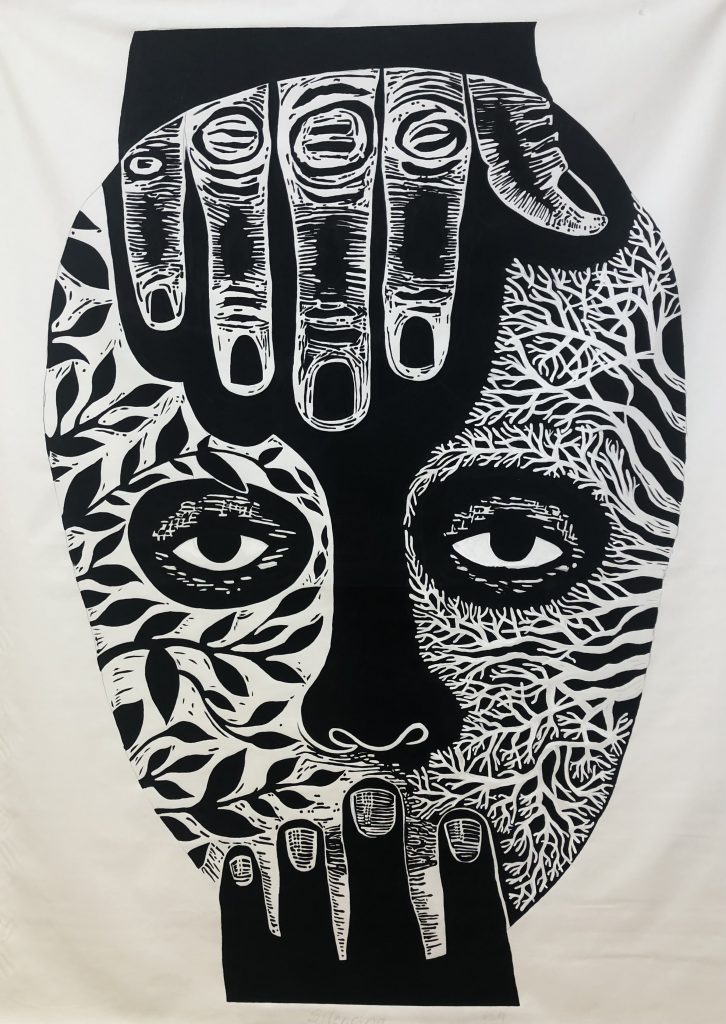 Not surprisingly, self-expression and its deliberate suppression are major themes here. “Silencing,” combines several innovative, graphic tropes, like the hand not just over the mouth, but another holding the head as though to control thought. On one side, spreading vines can be identified with unconstrained freedom, while on the other a reflecting, wonderfully ambiguous pattern suggests both the growth of roots and branches and the circulation of blood in veins and arteries. This is not some general complaint about life being unfair; this is a strong, participatory vision of the unending struggle of all life to become itself. 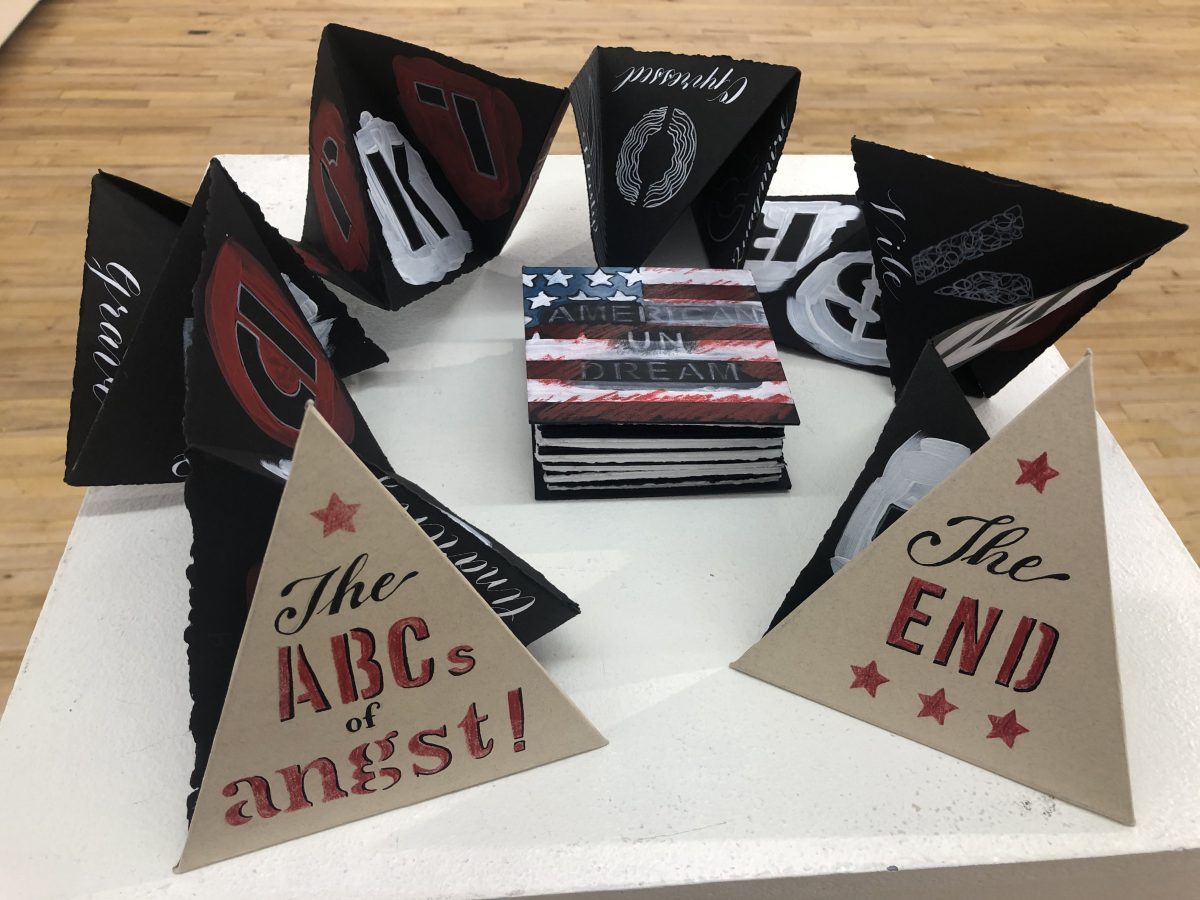 In general, singular images such as these compromise development over time, as in a book or movie, in favor of direct impact. Knowing this, Steele-Makasci may cover her image with elaborate texts that, like in reading a book, allow viewers to learn more and build feelings as they proceed. “The Silent One” does this while simultaneously invoking the difference between a quiet exterior and a vivid interior. When that isn’t enough, she has gone ahead and made her own highly original books. One of them invokes not only the format of the book, but also a child’s toy: paper dolls. “THERE ARE some things to tell YOU,” it says on the front, and on the back: “BUT i CAN’T.” Each of the dozen-plus doll-like figures is drawn ambiguously, presenting some male and some female characteristics, which brings a refreshing bit of balance to a time when men are often made the universal perpetrators and women the inevitable victims. Each of the cover figures wears a firearms target on its torso, while each of the inner pages makes a statement about disrespect, sorrowfulness, refusing to be silent, and the like. Another, “The ABCs of Angst,” is painted on a long, narrow strip of paper folded into triangles, so that it opens as a text that rotates while being read, perhaps invoking Steele-Makasci’s  frequent motto, “Screw Process,” which can be read several ways, including a reminder that “Process” is the original German title of Kafka’s masterpiece, The Trial. That’s not as great a stretch as it may sound: another book-like structure is titled “German Blood.” 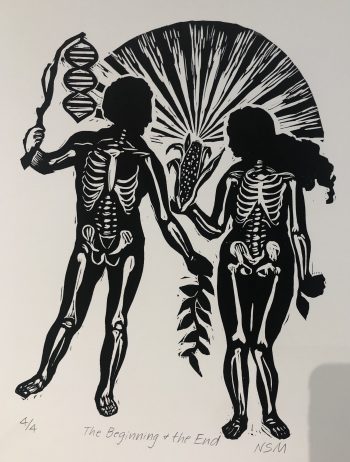 There are 40 paintings, prints, reliefs, and books in Make No Bones About It. Each one could almost certainly be the subject of its own essay. But that’s the point of good art: instead of her vision of where society has gone wrong and what needs be done to fix it being seen through an intermediary, her artistry enables each viewer to encounter it directly. This review has barely scratched the surface of a body of work that cuts deep into the polished surface of America to reveal some of what lies beneath. Consider, finally, “The Beginning and the End,” one of the most essential statements of human values since Leonardo da Vinci’s “Vitruvian Man,” and one that doesn’t leave the man standing alone.